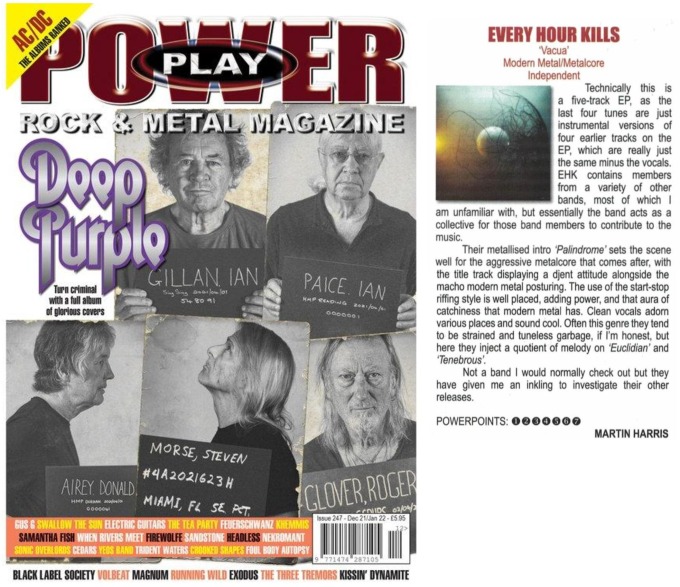 HOLLOW, lead by Andreas Stoltz (ex-Binary Creed) has a new album entitled “Tower” out now as of Friday, November 26th via Rockshots Records. The fourth full-length from the Swedish prog power act follows 2019’s “Between Eternities of Darkness”, which marked the band’s return after a 20-year hiatus since unleashing the 1999 album “Architects of The Mind” via Nuclear Blast Records.

Featuring 10 tracks, “Tower” is a story album best listened to as a whole, which tells a tale of transformation with its blend of progressive metal/rock, power, melodic death, and thrash elements. Andrea Stoltz is accompanied by drummer Stalder Zantos who also appeared on “Between Eternities of Darkness”.

“Working with Stalder Zantos has been a more continuous element in writing the material for Tower than on Between Eternities of Darkness and this has definitely influenced the outcome as has contributed more on this album than on the previous one,“ adds Stoltz.

On HOLLOW‘s “Architect of the Mind” artificial intelligence and creation were the topics of discussion, for “Between Eternities of Darkness” parenthood and tragedy were the subject matter, and now for “Tower” the concept of inner and outer freedom is explored. It’s also about belonging and transcendence and Stoltz hopes these are things that most people can relate to.

“The relating bit is important since art – regardless of form – is a meeting of emotions and ideas. It needs to find something to resonate within the person who takes part in it. When asked, I find it hard to describe the music, but it’s metal. It has distorted guitars, double bass drums and harks back to bands like Judas Priest and Queensryche. But there is also quite a bit of contemporary metal on Tower. Since this is a concept album with the ambition of conveying a story, listening to it as a whole is encouraged. I hope you can find something that resonates with you on it. Hopefully, HOLLOW’s fans will be able to trace today’s music back to Modern Cathedral and Architect of the Mind. I’ve made an effort to keep it as straightforward and simple as possible. I think most fans will have no trouble recognizing it as HOLLOW.” comments Stoltz.

“Tower” is available via Rockshots Records at the following links:

Lyric Video – Every Drop of My Blood – https://youtu.be/3pNBXUwrn2k