“If you’re looking for some heavy Lamb Of God vibes, heavier than the newer Lamb Of God has to offer, this is the band you’ve been needing in your life. The main chunk of the song(Sorrow (Nothing More In Between)) is straight to the point heavy metal. Harsh, aggressive, and ready to go.” – Metal Injection 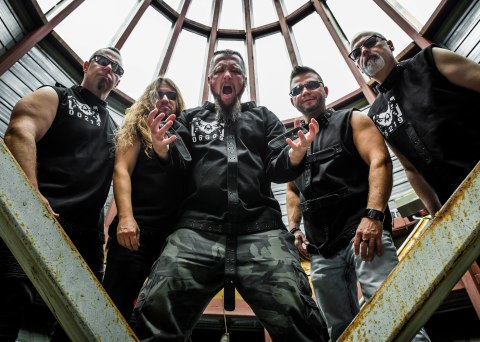 ’Of recent times, this is the most accomplished album I have been given to listen to… they exist on extremity and a deft art of producing tunes that make your blood boil and your speakers rattle.’’  – Brutalism (Under The Deep Review 2015)

‘’Those looking for melodic death metal on the heavier end of the spectrum need apply here…be ready to pump some fists, bang some heads, and reminisce back to a time when melodic death metal wasn’t all about clean, poppy choruses – just raw and memorable carnage.’’  – Dead Rhetoric

“I’ve played with some of the best metal drummers in the world and I’d put you up alongside them any day!” – Jeff Waters (Annihilator guitarist)

‘’Under The Deep certainly doesn’t mess around when it unleashes itself upon the listener. This is an awesome death metal album.’’  – Powerplay Magazine

“Evertrapped, and as they lay their claim as one of the front runners of melodic death metal in all of the land” – Bucket List Music Reviews

‘’Do you want to know what lies under the deepest and darkest regions of the human soul? This vicious and ruthless album might have all the answers you’ve been searching for.’’  – The Headbanging Moose  (Under The Deep Review 2015)

‘’There will be some heavy headbanging and «air guitar» playing while listening to this album.’’  – Ondes Chocs  (Under The Deep Review 2015)

‘’An intense and at times brutal offering of technical edged Melodic Death Metal… it’s a full on assault.’’  – MetalTalk  (Under The Deep Review 2015)

‘’Evertrapped have a lot of experience under their collective belts and it shows… it’s sincere music, played from the heart.’’  – Hellbound

‘’It’s clear these guys are not followers. They make their own brand of Melodic Death.’’  – Metal France

‘’If you want your dose of Melodic Death to be as brutal as possible, you won’t be disappointed with Under The Deep.’’ – Metal Universe

‘’Under The Deep is a full-throttle melodic death metal release that endlessly descends into new layers of carnage as the album progresses.’’  – Worship Metal 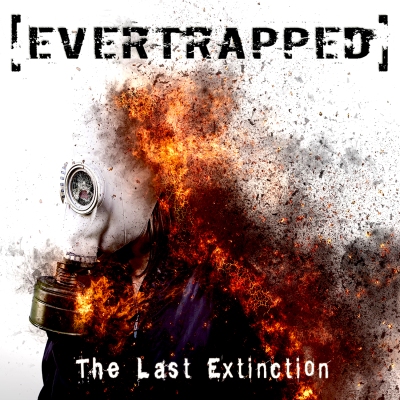 [EVERTRAPPED] is a Montreal-based five-piece who have been bringing beautifully relentless brutal melodic death metal to audiences since 2007. The band’s name is intentionally written with enclosed brackets to signify the trappings of modern life for all of us and how people, despite their best attempts to break out of the mold are still affixed to a simple controlled existence and futility.

Members of the band bring together their collective experience from the Montreal metal scene to create their heavy brand of melodic death metal. The guitarists Frederick Dupuis (ex-Daggerfalls) and Vincent Benoit hammer out raw guitar while drummer Eric Lemire (ex-Apocalypsys, ex-Ice Castle) pummels the drums. Their versatile frontman James Brookes (ex-Ammonia, ex-One Final Moment, Continuum) easily alternates between strong clear vocals and low bellowing screams giving listeners the illusion of more than one vocalist. John Yates (ex-AraPacis) weaves together each song with his driving bass lines to keep the energy of the punishing track at an all-time high.

Their lyrics come from two places. One from the dark and exaggerated metaphors for things actually based on personal events. The other is lyrics that are only loosely based in reality and have an almost fantasy-like appeal. Sometimes the reality can be based on what could be the actual state of the world as it is or an image of a future where the world is on the brink of an apocalypse. The overall idea is that the lyrics are not meant to be understood at face value in any way. It’s an art form that’s open to interpretation by the listener.

“Our new album ‘Last Extinction’ is almost an amalgamation of what we did on “The Anomaly” (2012) and “Under The Deep” (2015). On “The Anomaly” there was room for some clear vocals and it had an overall softer sound (within the confines of death metal) whereas “Under The Deep” went straight for the throat with very little room to stop and breathe and no clean vocals at all. Either way works just fine, but this new album “The Last Extinction” offers both of these aspects. When it gets heavy, it gets really heavy but there are plenty of parts that open up and give way to clear vocals or a nice blend of gutturals and clean and in some cases, some types of riffs that [Evertrapped] has never really experimented with before. Each song takes the listener on a quasi-progressive death metal adventure, but every now and then keeps coming back to simpler catchy riffs made for some hardcore headbanging.”

With influences ranging from death metal to melodic death primarily, along with some classic thrash and speed metal, which explains their technicality and diversity sonically, the album overall will give fans a very heavy post-apocalypse feel. It’s meant to mix the dark and light of the end of all things. Fans of Arch Enemy, Persefone, Whitechapel, Death and Fleshgod Apocalypse will feel the whirlwind of aggression.

Track by track explanation by the band:

Sorrow (Nothing More In Between)

Sorrow would have to be the song that touches the most on a personal situation. The lyrics are of course written in a way to make a small personal thing sound like a colossal epic event, but is realistically about being on the receiving end (or lack thereof) of a connection between two people where one knows they aren’t giving enough yet persist, none the less to make it seems like all is well on the surface all the while knowing that underneath, it isn’t and leaves everything in an unwelcome grey area. And as a result of which one is left in the dark and can’t help but overstate how there is a light of sorts that’s now been left behind or abandoned.

This song is written almost as a story that explores the negative effects of oppression towards advanced thinking. For the most part, more specifically, the oppression of organized religious groups. As the chorus of the song mentions ‘holy men,’ it kind of gives it away. But mostly depicts said negative effects as being the truth behind why the world, in some cases, is in such chaos. And the story ends with a conclusion suggesting one school of thought that if this is allowed to continue, and in this case suggests that if we continue this way, well you might as well give up now and be prepared to watch half the world burn because that’s the more likely outcome.

This focuses more on the human impact on the planet. Now, this is by no means a pro-green statement that I’m trying to make. It simply depicts the inevitable outcome of our effect on the planet as it stands now. The effect, of course, being a rather bleak and hazardous one that can only lead to annihilation no matter how hard we try to fix it. It even ends with a warning that something wicked is coming. The warning is not meant to say, better be careful or we’re all doomed. It’s meant to say, brace yourself because the last event that wipes us all out is on its way whether you like it or not.

This is actually an homage to the Mad Titan himself. Being a big fan of most things Marvel, this is actually written about the character Thanos and his actions during the Infinity War series. Essentially, his rationale being that there are simply too many beings in the universe and not enough to go around. So the solution…find a way to wipe half of life randomly and dispassionately. So the song keeps with the end times type theme, but in this case, focused on one fictional character and begs the question, what do we do when the bad guy wins? And furthermore, when there is perhaps a justified logic to it?

This song is one of a two-part series on the album (followed by The Last Extinction). The idea here is yet another point of view of how we could doom ourselves and this case through the overuse of machines that would one day take us over. We would, therefore, become the dying species and machines could inherit the earth. It also goes on to say how those responsible would clearly have to be cold and soulless individuals not to see the possible outcome and the only way we could avoid this would be to follow our natural instincts that may prohibit progress in this particular field but doesn’t open the door to possible extinction.

This being the follow up to The First Machine goes further to the point where humanity is at the brink of its own destruction. It makes the listener feel like the people left have gone so far past the point of no return that at that point they almost want it to end. To see what comes next, if anything. The setting is that of a dark world at the end of our evolutionary stage in a world being more rapidly consumed by the shadows and darkness of the rest of the universe and now ready for its next stage of planetary evolution even if it’s a mechanical one.

This is probably the simplest one in terms of how it’s written. It doesn’t go too far in-depth about anything really, it’s almost like an overview of the theme of the album so far. It simply explains how humanity has lived in the illusion that everything’s just fine when it clearly isn’t. And if everyone simply woke up and looked around they’d see that everything’s going to take a nose dive one day and the results won’t be pretty. But it goes on to depict how it’s ultimately too late anyway so one can only wonder if it’s even worth waking up to this reality at this point.

This song was originally a track of the first Evertrapped album Tales From The Supermax (which I was not a part of) however it’s been totally re-written. The music is still the same only re-recorded from scratch but the lyrics re-done except the title which we kept. I really didn’t take anything at all from the original lyrics. The overall theme here is once again another point of view of our own destruction only this time the more plausible one which is breeding ourselves into extinction. It shows how it’s one thing to simply want your race to continue propagating itself but you have to start looking on the other hand how it’s actually gotten out of hand. We continue to breed exponentially on a planet that can’t sustain it. And this is possibly the biggest blinder pulled over people’s eyes, and it’s written in a way that says, well if this is what you wanted then here are the consequences.

This song is a follow up to Learning To Die from The Anomaly. This is the one song that breaks away a bit from the overall theme of the album and deals more with dark introspection and the nature of obsession. However, it is none the less written in a somewhat abstract way and the metaphors used still keep it within the great darkened world that this album tries to create. It summarizes how following Learning To Die, if death no longer bothers someone then what other dark and terrible things could also no longer bother a person like that. In other words, could the ability to no longer feel make a person feel invulnerable.