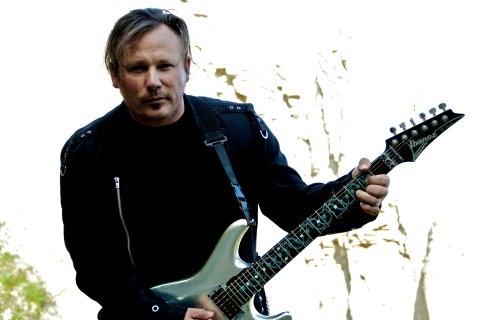 Guitarist Kevin Estrella’s project Pyramids On Mars has a new album being released on December 21, 2019, entitled “Edge of the Black”. This third full length from Pyramids On Mars offers up an aural palette of intense instrumental progressive shredding rock that’s emotional, provocative and 4-dimensional.

Teaming up with Bravewords, Pyramids On Mars is premiering the album’s full stream before it officially drops HERE.

“On ‘Edge of The Black’, I wanted to put emphasis on songwriting and telling a story. The emphasis is not just on the lead guitar melody, but on the band as a whole. Harmonic variations on repeating themes are strongly utilized; like rhyming phrases in spoken language that allows easier accurate retelling of the original story. This idea of repeating music phrases/themes so the audience can easily recall it and hum it all the way home.

Many people would think that being an instrumental guitarist that I must listen to a lot of guitar players.  On the contrary, I do not.  Yes, I was originally influenced by guitar players like Joe Satriani and Yngwie Malmsteen and spent many years learning their style.  But my own sense of identity has come from the music I am most passionate about, which is Baroque Classical Music. I am a huge Yngwie Malmsteen fan. I spent two years, in fact, listening to nothing, but Malmsteen and studied his style.  But I did not want to become another Malmsteen clone. I realized that in order to play like him, I had to listen to his influences. My life changed when I started listening to Bach, Vivaldi, and Paganini. It was like hearing music for the very first time.  I listen to mostly classical music these days.

When you listen to Edge of the Black, most of the guitar melodies are actually violin melodies.  And many of them are found in my online instructional guitar lessons. There are a few other people who inspired Edge of the Black.  You will hear Iron Maiden, Rammstein and Queen influences. Some of the bass parts are inspired by Steve Harris (Iron Maiden) and John Deacon (Queen).

Personally ‘Edge of The Black’ sounds like if Joe Satriani and Yngwie Malmsteen joined Rush.”

“Edge of the Black” follows Pyramids On Mars‘ two previous albums and was written, composed and performed solely by Kevin Estrella who cites influences from musical greats including J.S Bach and Antonio Vivaldi along with today’s guitar virtuosos Yngwie Malmsteen and Joe Satriani. “Edge of the Black” pays homage to these artists while still maintaining Estrella’s own creative flair. Estrella shares his thoughts on the album

“Edge of The Black” pre-order available on Bandcamp.

Every once in a while there comes along a band that is so different or unique, you would think they were dropped on Earth from another planet.  Pyramids On Mars is one of those bands. What first catches you, is that they are an instrumental band. A combination of elements such as hard rock, industrial, metal and psychedelic rock: and then the lead guitar comes soaring in.  Well crafted, beautiful, melodic phrases so catchy and memorable they will be stuck in your head for the rest of the day.

Pyramids On Mars is the solo project of guitarist Kevin Estrella.  He wanted to do something musically different that would stand out from the crowd. Estrella’s musical style is very similar to world-renowned rock guitarist Joe Satriani, so much so that Estrella has nicknamed himself the “Satriani of the North.”

“Of course Satriani has had a huge influence on me,” he says “But he (Satriani) does more of a bluesy thing whereas I am more influenced by classical music.  I absolutely love the Baroque classical composers J.S Bach and Antonio Vivaldi who are my biggest musical influences.

Estrella recorded, produced, engineered and mastered his debut album, self-titled “Pyramids On Mars” in 2013.  Since then, he has been capturing music industry attention-getting international radio airplay in the U.S, Canada, South America, and Europe.  He is a regular guest on Brian ‘the hammer’ Jackson radio (Los Angeles) to over 4 million listeners and a weekly speaker on Real Rock Radio (Chicago).