Heavy metal brewers TRIBUNE are proud to announce their 2014 ‘CANADA SLAYS TOUR’ kicking off in Kelowna, BC on April 3rd and will see the band trek as far East as Montreal, QC and return West to wrap up the tour in Nanaimo, BC on May 3rd. This is the band’s second cross Canada Tour since 2012, when they toured the US and Canada in support of their album ‘Elder Lore/ The Dark Arts’.

“Greetings and salutations, friends of Tribune. We have news for you! After two years of musical scheming and dubious machinations, we’ve decided to serve you our eclectic brand of heavy metal in person. Tribune will be touring our newest album, ‘Tales’, across Canada. This means that we’ll be stuffing our tall, sweaty selves into a van for the sake of your personal amusement. The new CD and Skeletal Lich Shirts are available, so come prepared if you want to put some gas into the tank of our voracious bandwagon. Her thirst is unending…We’re calling this tour ‘Canada Slays Tribune 2014’. It’s all about our friends and fans, as if it never were before… Come on out and have a good time with us. Cheers! Terry Anderson (guitarist)”

The Vancouver quintet unleashed their concept album ‘Tales’ this past October via their indie label Corpse Corrosion Music. Inspired entirely by literature, ‘Tales‘ features a wide array of influences, from Homer to Mary Shelley to H.P. Lovecraft, to more extreme influences such as Carcass, Death and At The Gates. The band’s appetite for more melodic and more brutally heavy sounds to follow-up 2011’s Elder Lore/The Dark Arts is demonstrated with their collusion of extremity and accessibility that bleeds into the melting pot and their fresh take of progressive death metal. 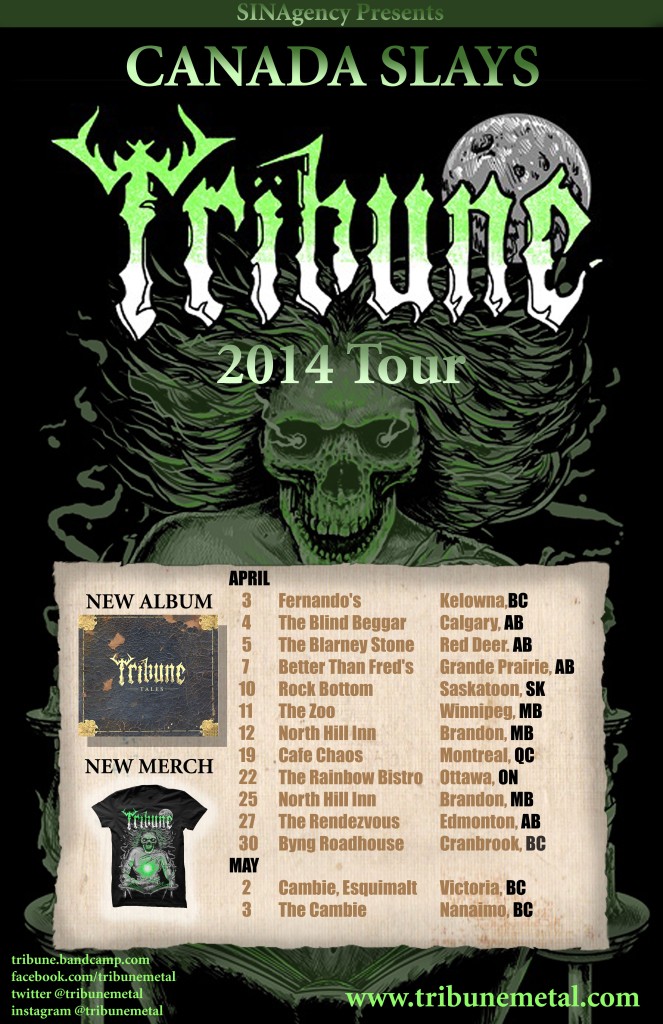 “Tribune first came to my attention with their free-willed debut, 2011′s Elder Lore/ The Dark Arts – and I’m happy to report they have expanded their unfettered approach even further. These talented Canadian draw influences and inspirations from all over the metal map, fusing extremity with accessibility, the traditional with the contemporary, sweet simplicity and exceptional complexity. What’s more, they have brought all the diversity together into one smooth, cultured, and satisfying whole. There is so much to enjoy on this thoughtfully presented and powerfully produced CD: well worth seeking out for those looking for some fresh, creative metal.” – Zero Tolerance Magazine

“Lyrically, this is steeped in the lore of Lovecraft and Wells, but the music on offer goes through many changes, from raging trad and thrash to technical death metal, changing Tyr into Arsis, Slough Feg into The Black Dahlia Murder. With a production that is healthy and full of fire, ‘Tales’ is a must hear for those looking for something unique and unclassifiable in the metal world. A rare treat.” – Powerplay Magazine

“Tales is one of the most distinctive records I’ve heard this year…undoubtedly delivers difference right off the bat, putting its best foot forward and defying expectations the moment it begins by spotlighting Bryan Baker’s unprecedented singing style.” – Angry Metal Guy

“This is the release that I would expect Tribune to break through with; this is very strong material that is well written, interesting and technically excellent.” – Brutalism

“Canadian band, TRIBUNE, are an eclectic mix of different sounds and genres that result in a refreshing style that can only be heard to fully understand. The progressive quintet’s second full-length album, Tales, is a concept album based on the writings of renowned authors, like Lovecraft and Wells, but the music remains intensive and enjoyable.” – Metal Observer

“very now and then, a band comes around with a defined sound unlike anything previously heard by the listener. Such is the case with Tribune, and their latest release Tales.” – Kosher Metal

For more info on Tribune, please visit these links: