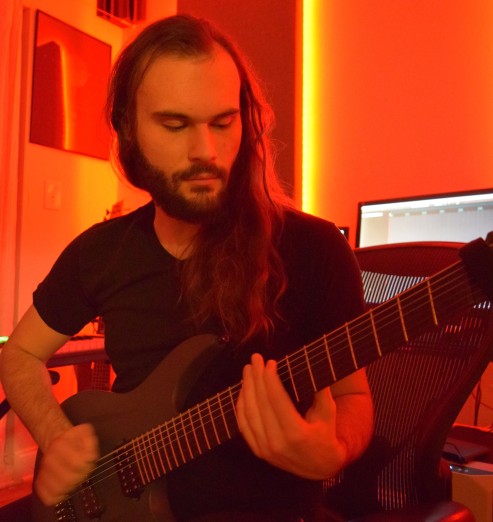 Manuel Barbará is a New Jersey based musician and composer with a passion for progressive metal and contemporary classical music. He is a graduate of Berklee College of Music where he earned a degree in guitar Performance and Composition.

He was not born into a musical family. He did not grow up surrounded by music, and he did not dream of being a musician from a young age. In fact, despite taking piano lessons as a child, he rarely thought of music even as a recreational activity. For most of his teenage years, he intended to pursue a Computer Science career. However, inspired by bands such as Iron Maiden and Pink Floyd he took up guitar at the age of sixteen. Under the tuition of renowned guitar teacher Matt Mills, he successfully auditioned for Berklee less than three years later.

Metal drew him in with its complexity and sophistication, energy and passion. Through it, he found a gateway into the classical tradition. He has had the opportunity to study both of these styles under mentors such as Joe Stump, Jon Finn, Shaun Michaud, Norm Zocher, Marti Epstein, and Arnold Friedman.

Precision, structure, discipline, and ambiance, characterize both his guitar playing and his compositional style. Drawing from his eclectic musical background he takes equal inspiration from bands like Periphery, Tesseract, and Dream Theater as well as from instrumental guitarists like Tony MacAlpine and Paul Wardingham and composers such as Dubussy, Bartók, Pärt, and Stravinsky.

Taking his training as a classical composer and applying it to this style of modern metal that he loves so much, and going beyond the standard Yngwie “neo-classical metal” influence, Barbara will present his debut album “Moonrise” this coming March 2021.
Barabra adds:
“This music has been part of my own little universe for so long, and I am beyond excited to share it with the world. The process of making the album has been an epic journey, a learning experience, and a trial by fire all wrapped into one and I am looking forward to bringing it to an audience. The purpose of music for me, after all the craft and technique and study are done, is to draw the listeners in and allow them to experience totally new worlds. The details of those worlds will be up to each individual person, but I hope the audience will join me on this small adventure I’ve prepared.”
Much of the writing of the full length was done during the very early days of his training in classical composition and he has even more music to come (unrecorded, as of yet) that is much more refined and elaborate in its use of compositional techniques and harmonic language.