“On this EP, we really tried to lighten it up and go back to the energy and feel that got us playing in the first place, music for and adventure or memory-making music! The soundtrack for that summer you’ll never forget or that time you did that thing and you’ll always think of it when you hear this song. It’s a feel-good and takes no prisoners combo at the same time!” – Rebel Priest 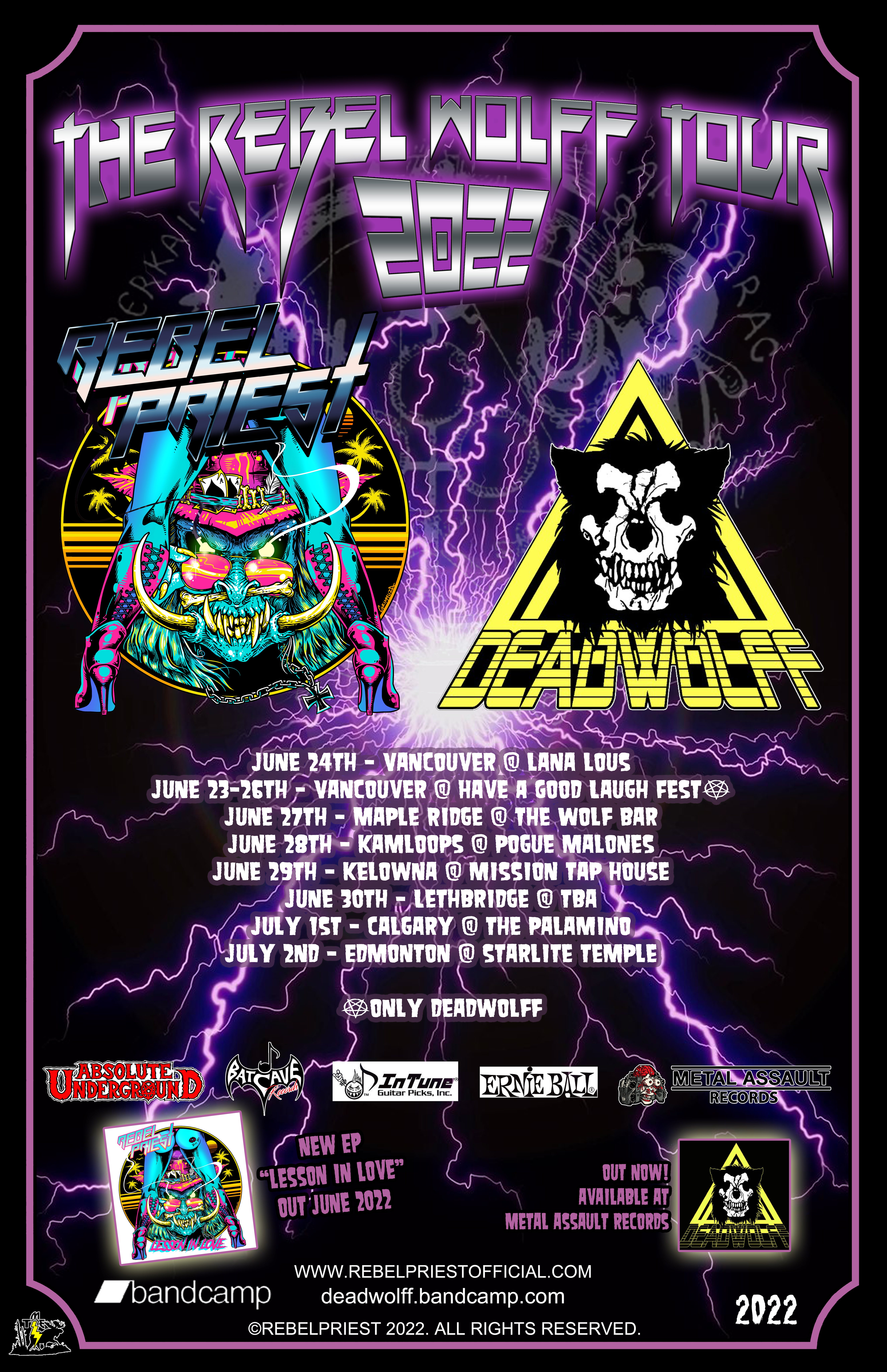 “good time high energy rock that demands a beer in hand, sweat running down the back and smiles all around…. A combination of AC/DC, Guns n Roses and Motley Crüe would be how I’d describe them, with added Motörhead to bring more flame to the fire on occasion.” – The Razor’s Edge

“Pay attention for REBEL PRIEST’s Rock ‘n’ Roll homily, because as they preach Rock ‘n’ Roll with “Lost in Tokyo”, you’ll be converted to their hard Rock cult. 9/10” – Metal-Temple

“It’s such a blast of high-powered hard rocking energy, this a fun track (Lost In Tokyo) that will make you want to visit the city and get lost.” – Games, Brrraaains & A Head-Banging Life

“For fans of bands like Mötley Crüe and the like, Rebel Priest may be the right thing and if you are looking for dirty rock with beer-loving lyrics for a night of drinking, you will find it at Rebel Priest.” – Hellfire Magazin

“Rebel Priest stand for fast and hard rock ‘n’ roll. Three of the four songs are absolute party grenades and exude unbridled joy in playing. The EP Lost in Tokyo whets the appetite for more and then screams out live from the stage.” – Soundmagnet

“Lost In Tokyo (single) –  A crunching power packed snare drum punch comes crashing through as this shredding beast comes at us full on. Shredding guitar riffs are strewn all over this cranking monster as it ramps up the energy as this fantastic track gathers momentum and brings cool bass chords that deliver a plundering beat that combines well with this fantastic killer track.” – Jace Media

“A good Rotzrock Rundling let loose the REBEL PRIEST on the listener!” – My Revelations

The EP as a whole (LYRICALLY & MUSICALLY):

On this EP we really tried to lighten it up and go back to the energy and feel that got us playing in the first place, music for adventure or memory-making music! The soundtrack for that summer you’ll never forget or that time you did that thing and you’ll always think of it when you hear this song. It’s a feel-good and takes no prisoners combo at the same time!

1. Lesson In Love is a non-traditional ballad like a love song sung by a Tommy gun hahaha! It’s about the trials and tribulations of loving something and just going thru it, the ups and downs and spirals but without the direct subject being a person. It’s open-ended in that it is what you love or love doing and how it’s a journey that can always find a way home.

2. Dïvebomber is a speed rock song that came together as we were chatting about WW2 dogfights and how crazy it must have been, then we thought that nothing could be crazier than a dïvebomber so we picked up our instruments and it just bled out!

3. Coatcheck Girl is a song Nate wrote a while ago about working at nightclubs and how (most often) the woman working the door was the best looking lady in the place! It’s been in our set for a while now and is a staple for our live shows, I mean who isn’t ready to party when a song starts out with LET’S GO GET SOME BEER!

4. Bonfire is a song about the great Bon Scott and nods to his wicked wordplay and snarky attitude. He was a true original and nobody came close! With thundering drums and lightning strike guitars, this song is a punch to the gut just like how he lived his life!

1. Nate is an avid RC car enthusiast and has been working on cars his whole life. Benny has been practicing Muay Thai since the pandemic.

2. On a few different tours, I rolled under a moving semi-truck, Benny free galled out of a 40 ft tree hitting every branch on the way down, Nate broke his sticks and almost took out someone at front stage, Benny broke each of his knees on stage and finished the show. Once when we were on our way to play a show in Calgary, we got pulled over and when we got out, a bunch of whiskey bottles fell out and we convinced him that they were for candle holders.

Another time we were driving thru the Rockies and we got caught in a forest fire, landslide, tropical storm (with cars and trees getting blown over) and finally almost totaled by a moose, all on the way home.

3. The band name came from a Tombstone of a Canadian Shaman, it’s said “*redacted* he was a Rebel, he was a priest, he was the storm, this will not stop him”

4. The band started out with stage attire that was Manowar meets Iron Fist era Motörhead, which we dropped early on because only one person a show would remember the outfit making it look like we were taking turns dressing up like a caveman.

The band has had the pleasure of touring Japan, and performing alongside bands such as Udo (Accept), Lordi, Diamond Head, Crystal Pistol, Flotsam, and Jetsam along with playing many headlining gigs with the energy of Motorhead meets Motley Crue. Since forming in 2014, the band has released three studio albums “R’ley Heavy” (2019), Enabler (2017 ), Self-Titled (2015) along with one live record “Dead Alive @ SBC (2017).

Now in 2022, they offering up a slab of new music in the shape of a new EP “Lesson In Love” via Batcave Records/Thundermoose Entertainment on June 24th to follow their 2021 EP “Lost In Tokyo”. The forthcoming EP “Lesson In Love” is four tracks that ready’s fans to hear the band’s NWOTHM influences along with their brand of slurry heavy Rock n Roll.

Compared to last year’s EP “Lost In Tokyo”, which was written in Japan at the very end of 2019 about their adventures in the country, “Lesson In Love” takes a new avenue as they explain:

“On this EP, we really tried to lighten it up and go back to the energy and feel that got us playing in the first place, music for and adventure or memory-making music! The soundtrack for that summer you’ll never forget or that time you did that thing and you’ll always think of it when you hear this song. It’s a feel-good and takes no prisoners combo at the same time!”