“We are incredibly proud of how our music has been received at home and around the world. With records being sold from Spain to Australia, United K and Japan it’s clear that the world is ready for rock to come roaring back into the mainstream. Our next albums plan on being heavier, full-length LP and we can’t wait to get back into the studio to bring it to all our fans. There is no skipping songs on a Lÿnx record, we want every track to be quality work that gets you either up and dancing, or a ballad that brings a tear to your eye, or a hard pounding heavy hit to get your anger out. For us this isn’t just a hobby, this is a lifestyle, and we want every one of our fans to be as ecstatic as we are about the music we create.” – Lÿnx

“Lÿnx is an honest to goodness rock n roll band in a time when rock needs just that. They offer up blistering guitar riffs and solos, melodic choruses, and high energy performances that resemble the spirit of a time long gone by.” Hitonindie.com

“A brilliant release that perfectly builds on the stage that their self titled EP set. ‘Long Live Rock N Roll’ is a direct unyielding ode to what rock music used to be. A release that’s not for the faint of heart, its bold, brash and wonderfully Brutal. Landing as one of Lÿnx’s defining musical moments” Thomas Bedward – Broken 8 Records

“ Opening tracks can tell you a lot about an album. Sometimes bands come out swinging, and others take a slow burn approach. Theres no slow burn in Lÿnx. And the title track ‘Long Live Rock N Roll’ roars out of your speakers. It features a great guitar solo, fantastic percussion, and drips with 80s glam.” Dave Wilks – CGCM Radio/ Podcast

“This is a really solid, fun band that were excited about, and can’t wait to hear what’s next. So, Crank it up and press play!”- MusicNotez Magazine

1. Our guitarist blade uses his background in music production to compose a lot of our songs at work without an instrument in his hands. Constantly thinking of different riffs, beats he then goes hope and sees how they can work musically. A lot of work and some don’t but once he has an idea in his head he records it on his phone, goes home grabs a guitar, and starts figuring out how he can make it into the Lÿnx signature sound.

2. Our first show together was a show at the Blind Beggar in Calgary. We put on a 3-band show with us being the headliner to close out the night. We prepared our setlist and hit the stage. After the set, the crowd was demanding an encore, and of course, we didn’t have one. We ended up playing Long Live Rock n Roll again and invited the crowd up to join us on stage and dance out the rest of the show. It was a great moment for the band and the fans loved it, what a great way to close out our first show together.

3. We are all blue-collar workers who have spent years and years grinding away the short time we have on this earth living someone else’s dream. We all decided as a band to create our own path while putting our heart, soul, and past experiences into our music. Our passion to create music is what drives us, while knowing that once we make it we never want to go back to the mundane working life we all know.

4. We want our fans to be taken back to a time long gone that was full of hair, crazy outfits, and rockstars. As well as bring in a new generation who might pass off the music as “our parent’s music” we believe that the rock n roll genre has taken a backseat for a while to other genres which isn’t a bad thing but we want to make sure that the rock is still alive and make our forefathers proud.

=================================
The EP as a whole:
The EP is straight, heavy Rock’n’roll, you could pull it right off the shelf of any record store on the Sunset Strip in the late 1980’s, of course with our modern day producing and mastering!Track by Track:1) Long Live Rock’N Roll – We wrote Long Live Rock’N’Roll as a homage to all the legends that came before us.  Fangs put most of the lyrics to it and Blade composed the song.  From start to finish it’s the life experiences that Fangs acquired on top of his way of saying thank you and shouting out that Lÿnx will carry on the Rock’N’Roll dream that so many accomplished before us.2) Irresistible – Every good Rock’N’Roll band has to have a song about the ladies, don’t they!?  Irresistible is our shout-out to ladies, that one groove that appeals to them and also gives way to what every guy thinks when something smokin’ walks by.  Don’t lie to yourself, you know it’s true!3)  Crazy Crazy World – This song was meant and accomplished being our take on how the world had changed during the first of many COVID lockdowns.  How can we still make music? What’s happening? Can we start a band and accomplish our goals with all the craziness happening?  Fangs took the idea from what Blade and Flash put forth as an idea for a song and ran with what we were all feeling at that time. But wasn’t the world always a bit crazy to begin with?4) Red Rocket – With no instruments around and out for a tour the boys of Lÿnx had a sudden spurt of inspiration, how many times have you seen that beautiful Candy Apple Red Mustang, cruising down the road driving faster than you even though you’re already going 20 over the limit with that Miss. Right sitting in the passenger seat. Well, we took that shit and ran with it too.  5)  Forged In Fire – We all wanted to give our own take to an inspirational song, something that came from the heart and could be listened to if you had a bad day, or even if you’re busting ass at the gym.  Forged In Fire was our way of giving life to that idea.  We all choose to either give up, get pissed off, blame our shit on someone else, or rise to the occasion. This is Lÿnx’s promise.  WE WILL ALWAYS RISE 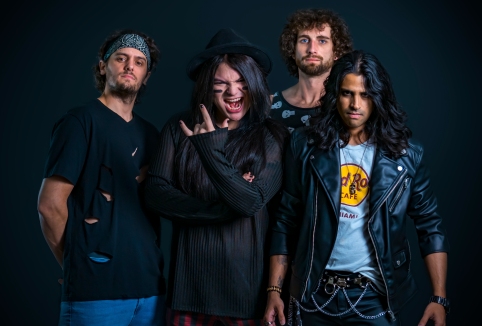 Lÿnx is the 80s inspired Hard Rock/ Metal four-piece currently based in Calgary, Alberta Canada. During the 2020 pandemic, the band was formed by former vocalist Lazer Wild and Lead Guitarist Blade. Soon after bassist Fangs, and Drummer Flash joined and Lÿnx was formed. The band is currently fronted by Ja6ur on Vocals, Blade on guitar, Fangs on bass, and Flash on Drums/ Percussion. Connected by a shared love of 80s glam metal and hard rock, the band immediately set about writing original songs that embody the style and swagger of the past, while embracing the polished production and down-to-earth grit of their more modern rock influences. Lÿnx released their debut self-titled EP in February 2021 followed up by their second EP titled “Long Live Rock N Roll” in September 2021 with Bullzhorn Records. Since their releases, the band has gained popularity through various reviews on different media platforms in Europe, Australia, and North America. Having gained a reputation for their anthemic choruses, sizzling guitar solos, and powerhouse vocals Lÿnx has garnered a dedicated and eclectic international fan base. The band has hit the stages with high energy and connected with their audiences through the love of Rock N Roll. The band aims to build on the momentum created by their released music and push their sound into even more extreme levels of Rock N Roll.