“Winds Of The Cosmos is a veritable blend of power metal and death metal. The songs combine crushing and aggressive vocals with a thrashy and melodic style of guitar playing. The drums are clear and punchy and give a solid foundation and framework for the music to thrive. All these elements together create something new and unique in its own right, blazing a new trail of melodic heavy metal.

The album’s lyrics guide the listener through a choice mix of fantasy and sci-fi themes, ranging from frosty Dungeons and Dragons excitement to space travelers and black holes. The lyrics also delve into personal struggle and growth, allowing fans to connect with the music on a deeper level.” – Celestial Wizard 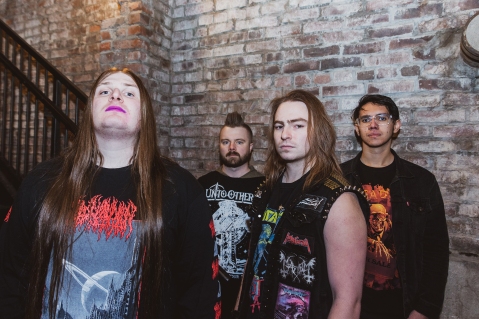 Celestial Wizard is a fantasy-inspired heavy metal band based out of Denver, Colorado. Formed in 2018, this heavy metal quartet delivers crushing riffs and grand stories of dragons and wizards. Seeking to stand out among the others, Celestial Wizard combines the best elements of death metal with symphonic and synthwave elements creating a unique and engaging sound.

In the beginning, they carried a symphonic, fantasy sound dousing every song with a healthy dose of strings, choirs, synthesizers, and the like. This vibe can be heard on their debut album “A Sinister Awakening” (2018). Intended to be a concept album, they marketed some of the limited edition tapes and mini VHS tapes as though the album was a movie, thus The tapes ended up getting put in the soundtrack section of record stores.

The next year, drummer Tim Gillman joined Nick Daggers (guitar/vocals), Guillermo Jurado (guitar/bass), and Amethyst Noir (vocals) and they slashed most of the unnecessary backing tracks and refocused the music on the riffs and the core elements of the band. The evolution is reflected in the second album “Winds Of The Cosmos” (2022) (Release Date July 15th).

They deliver an energetic and engaging performance while keeping the sound tight. They make an effort each night to make their songs come alive and immerse the audience in their love for playing. They have played with bands including Alestorm, Gloryhammer, Insomnium, Nekrogoblikon, and Unleash The Archers. Combining their passions of Dungeons and Dragons, space adventure, and fantasy, Celestial Wizard takes influences like Arch Enemy, Metallica, Firewind, and Turisas and forge a path all their own!

1. The band name Celestial Wizard was two words they just pulled out of a hat. In 2018, they sat down as a band and just wrote down as many cool words as they could, and put them all in a hat. After a couple of tries, they pulled out those two words and they stuck!

2. Before their current drummer Tim was in the band, he unknowingly saw them at a show performing with Aether Realm and Gloryhammer. If you look back at a photo they posted back in 2019 you can pick him out in the crowd, looking comedically surly.

3. The legendary Dan Goldsworthy did the art for both Winds Of The Cosmos and Ice Realm. He’s known for doing the art for all of the Alestorm and Gloryhammer albums, as well as many others.

4. Their debut album was intended to be a concept album, and they thought it would be clever to market some of the limited edition tapes and mini VHS tapes as though the album was a movie. The tapes ended up getting put in the soundtrack section of record stores before people knew who they were, it was pretty funny.

5. Their first album was produced, engineered, mixed, and mastered by Eric W. Brown of Nekrogoblikon. He went on to become an award-winning composer for the soundtrack on the video game ‘The Messenger’

The album as a whole explained by the band:

Winds Of The Cosmos is a veritable blend of power metal and death metal. The songs combine crushing and aggressive vocals with a thrashy and melodic style of guitar playing. The drums are clear and punchy, and give a solid foundation and framework for the music to thrive. All these elements together create something new and unique in its own right, blazing a new trail of melodic heavy metal.

The album’s lyrics guide the listener through a choice mix of fantasy and sci-fi themes, ranging from frosty Dungeons and Dragons excitement to space travelers and black holes. The lyrics also delve into personal struggle and growth, allowing fans to connect with the music on a deeper level.

Track by track (LYRICALLY & MUSICALLY) explained by the band:

ANDROMEDA
This song is the album’s opener. The song sets the tone for what lies ahead and is the first instance of the melody that returns again at the end of the album. It’s a short, up-tempo instrumental track that helps build momentum for the first full song on the album.

REVENANT
Revenant is the first full song on the album, and its driving riffs continue the momentum from the previous track. The triplet beat of the guitars and drums gives the song a galloping, energetic feel. The song’s lyrics revolve around immortality and the loneliness and anger that come with living forever. The track is a step in a new direction from the previous album, featuring primarily singing, instead of the signature death metal vocal stylings.

ICE REALM
Ice Realm is punchy and vibrant right out of the gate, drawing listeners in with its thrashy opening riff. The track is upbeat, fun, and engaging, keeping the energy sky-high through the entire song. The song takes the listener on a Dungeons and Dragons-inspired quest through frost-covered land in search of a magic weapon to dispel the realm’s icy curse.

POWERTHRONE
This song shifts gears into a slower, more melodic zone. The song’s dramatic synth swells and guitar leads create an atmosphere of introspection and hope, giving the album a nice change of pace after the previous high-energy tracks. Powerthrone’s lyrics dig into losing a loved one or a mentor, and having to press forward and carve your own path. The melody and lyrics work in conjunction to deliver an emotionally charged experience for the listener.

ETERNAL SCOURGE
Scourge brings the energy back up again with hard-driving riffs that come crashing in after an ambiance of spooky, almost vampiric organs and guitars that set the mood. Fast and heavy, this song is sure to be a favorite of any of the fans that prefer heavier music and getting caught in a mosh. The song’s lyrics dig into plagues and war, violence and loss, and the rise and fall of heroes.

STEEL CHRYSALIS
Steel Chrysalis is a more epic, symphonic track in relation to the others on the album. The song’s main riff delivers a healthy dose of groove that the listener can lock on to and enjoy the heaviness of the chugging guitars that follow. This track is the most reminiscent of the previous album in terms of sound, so for those that have been fans from the beginning, this track will feel very familiar. The lyrics go over themes of being true to who you are and growing stronger amidst hardship, eventually becoming the best version of yourself.

UNDEAD RENEGADE
Of all the tracks on the album, Undead Renegade is more akin to old school death metal than anything else written previously. Heavy, unyielding riffs carry on throughout the song to complement the fast and furious drums that set the pace of the song, and the solos and leads that reside in the song are gnarly and shreddy, true to form. The lyrics are, as the title suggests, about zombies and the undead as a whole. Visceral, heavy lyrics that fit the song like a glove and give the listener the excitement and terror of catching a slasher flick with their friends.

CYBERHAWK
Undoubtedly the cheesiest track on the album, this song acts as an easy, fun palate cleanser just before the epic finale of the album. A notable outlier in terms of sound, the song delivers an 80’s inspired pop song energy that gets your fist-pumping in the air. Complete with catchy choruses and arena rock-style guitar solos, Cyberhawk is drenched in nostalgia. The lyrics are reminiscent of cartoons we watched as kids about heroes in space, going planet to planet fighting the bad guys and saving the day. It’s an easy song for the fans to enjoy and connect with.

WINDS OF THE COSMOS
Winds Of The Cosmos is the title track of the album, as well as the grand finale. It begins with the melody that listeners heard at the beginning of the album in Andromeda, giving the album a sense of closure and consistency. This track is incredibly dynamic, moving from driving riffs to somber acoustic guitars in the bridge, and then dramatic breakdowns and guitar solos to reward the listener. The track sitting at just under 8 minutes takes the listener through the journey of a man lost in space, and his coming to terms with the end as he drifts toward a black hole. The song is emotionally evocative, carrying the listener through what are almost the five stages of grief. The song resolves with a sense of hope and accomplishment, wrapping up the whole album nicely. 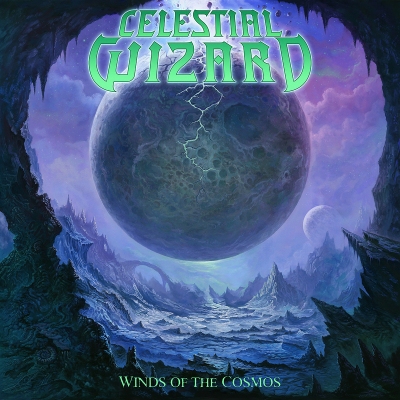