“Combining the influential sounds of Converge, Death from Above 1979 and Lightning Bolt, Montreal’s Gorlvsh (pronounced “Gore-Lush”) is dead set on adding some rowdiness and weirdness to the sonic landscape. We don’t know if they are, as they claim, “Montreal’s sickest guitar-less band,” but from what we can tell they make a hell of a racket that combines math rock angularity, crushing metallic riffs, off-kilter rhythms and a few catchy hooks in there for good measure.” – Decibel Magazine

“Blending Dillinger Escape Plan–esque angular complexity with punk snarl and groovy riffs reminiscent of Mutoid Man, Gorlvsh may not have been what the death metal/grindcore crowd at L’Esco were expecting, but they were one of the most fun and most unique local bands I’ve seen in a good while.” – Bucketlist Music Reviews 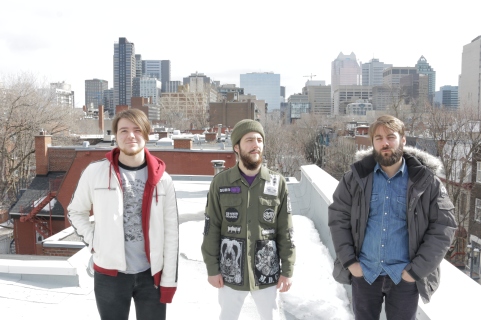 Crashing out of Montreal, Canada, comes the latest in new city groove in the form of GORLVSH. This power trio hails themselves as Montreal’s Sickest Guitar-less Band, and what they lack in guitar they make up for with a tornado of crushing riffs, a dash of poppy hooks and fucked up rhythms.

They combine their technical wankery with gutter punk sensibilities to bring a bizarre, mathy, metallic hardcore-esque punk sound with inspiration from Death From Above and Lightning Bolt. This bass/drum/banshee trio works hard on their music together with Nick (bass) starting with a bag of riffs, Noah (drums) adding complexity and then Isaac (vocals) writes lyrics about whatever inspires him that day and the result is unique, sludgy, metallic hardcore that can only be GORLVSH.

Even with their DIY attitudes, the sound is produced and performed phenomenally and they write their music with the live show in mind. They want people to be excited to experience something new and in 2019, they will release their first full length album “New City Vibe”. Currently the band’s debut single “Wait For Me” is out now and available Bandcamp along with their 2017 split EP with Offset.