Shared Stage with:
Lamb of God, Anthrax, Sick Of it All, SOD, Grim Skunk, Cryptopsy, Despised Icon and more! 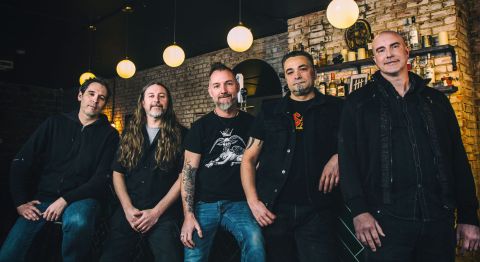 The Montreal based band Ghoulunatics made its name thanks to their very energetic stage presence and its own artistic signature and composition methods, resulting in a unique musical footprint that distinguishes them from the masses.

From 1994 to 2008, Ghoulunatics traveled all over Quebec and Ontario relentlessly, always putting the pedal to the metal. They made their mark on the Quebec and Canadian metal and hardcore scenes, but also garnered attention abroad. In 2004, Ghoulunatics toured Germany for the album Sabacthany. In 2006, with the release of Cryogenie, they rocked France after being signed to the label Enraged Productions, home of well-known French bands like Tagada Jones and Lofofora, etc. After 15 years of Rotten Roll, Ghoulunatics split amicably in 2008, ending with a sold-out show at Foufounes Electriques in Montreal. The group came out of retirement in 2010 to headline a food drive event. They hit the stage again in 2012 for a show at Club Soda, and have since been playing 2-3 times a year since then for special events or festivals.

2019 marks the 25th anniversary of the band as well as the return of Ghoulunatics! The group is currently working on new music for the first time since Cryogenics (2006) and will launch a single with the hopes of releasing an EP during the course of the year. Watch out! The ghouls are back!!