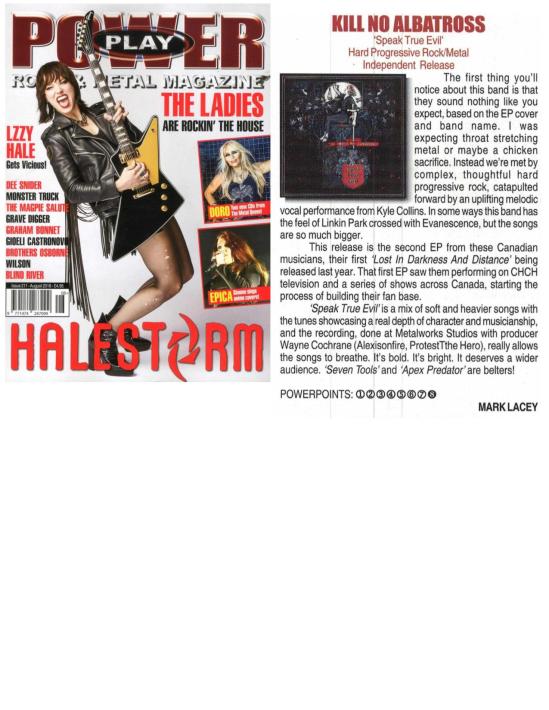 Unleashing their latest EP “Speak True Evil” this past July, wildly energetic Burlington, ON based KILL NO ALBATROSS will be hitting the road once again this coming fall in support of the release. Earlier this summer they toured across Ontario and Quebec including a performance on Vans Warped Tour. For this upcoming fall tour, they will be heading further East for the first time adding show dates in New Brunswick, Nova Scotia and Prince Edward Island.

“We’re absolutely stoked to be trekking out to the East Coast for the first time on this run, as well as revisiting some of our favourite cities in Quebec and Ontario. We’re especially excited for our new bass player Glenn Scott, who never thought he would willingly get into a van again.” says drummer Alexander Sallas.

The band released two music videos in support of “Speak True Evil” that can be viewed at the following links:

The EP features four tracks showcasing the band intertwining the accessibility of rock, the technicality of prog, and the energy of hardcore. Through intelligent songwriting, creative guitar work, and emotional intensity, they meld dynamic, bold, bewitching sounds to create no holds barred rock.

The band comments about the EP:

“Speak True Evil is a showcase for Kill No Albatross’ dynamic, technically proficient, intellectual approach to rock music. These four songs cover musical ground that ranges from furious to sweet, hopeful to agonized. The powerful vocals of Kyle Collins pair with the tight, impassioned instrumentation to create a unique sound that is as meticulous as it is robust. Going more in depth on the release, it plays off the title of Wayne Shorter’s 1966 jazz record “Speak No Evil”; “Speak True Evil” asserts the legitimacy of free speech as asserted by thinkers like Mill, Paine, Luxemburg, and Hitchens. As Mill writes, ‘If all mankind minus one, were of one opinion, and only one person were of the contrary opinion, mankind would be no more justified in silencing that one person, than he, if he had the power, would be justified in silencing mankind.’ After all, it is as much the right of the listener to hear as it is the speaker to talk – enforced silence imprisons man in the cage of his own perspective. The title, then, encourages listeners to speak true evil.”

EP download and stream available on Bandcamp, iTunes, and Spotify.

“Kill No Albatross combines many styles of rock and metal to create something fairly unique, as elements of everyone from Big Wreck and Alter Bridge pop in, but so do Deftones and even Fightstar. If this new track (Apex Predator) is any indication, it appears Kill No Albatross are branching out in unique directions once again.” – New Fury Media

“Playing songs from their impressive ep Speak True Evil, the band was too much for the Café Dekcuf stage. Guitarist Josh Pinkey refused to be limited by the stage and took off into the crowd choosing instead to play onto amps or wherever he could to try and engage the crowd.” – Splice Magazine (Ottawa TechFest)

“‘Speak True Evil’, the new E.P from Canadian alt-rockers Kill No Albatross, is a snapshot of a band on the rise. Mixing elements of prog, rock and alternative metal music, the E.P. is a perfect entry point for listeners looking for a fresh take on the genre.” – Happy Metal Geek

“Straddling that line between hard rock and metal can be a tough proposition but it can be done. This is where Kill No Albatross find their sound but they bring an alternative slant to the table to tone the metal side down and make it one cohesive sound rather than two horses pulling in opposite directions.” – Moshville Times

Playing songs from their impressive ep Speak True Evil, the band was too much for the Café Dekcuf stage. Guitarist Josh Pinkey refused to be limited by the stage and took off into the crowd choosing instead to play onto amps or wherever he could to try and engage the crowd. 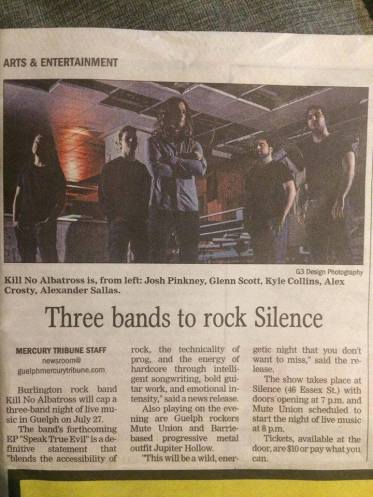