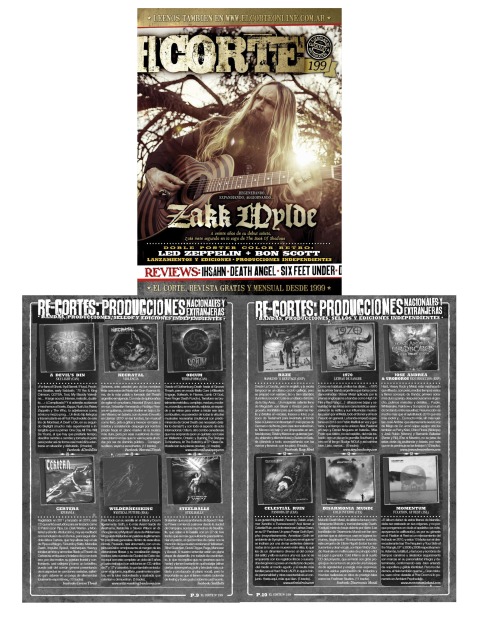 For fans of Evanescence, Nightwish, Revamp, Delain, Kamelot, Within Temptation

The band’s new EP ‘Pandora‘ was released last month on May 20th viaiTunes and www.CelestialRuin.com. Combining a heavenly destruction of heavy riffs with beautiful melodies, their catchy, singable and epic tunes draw on lyrical themes of fantasy and horror.

“The music on ‘Pandora’ is about unleashing chaos, beauty and all emotions into the world. It celebrates both the joy and the pain that emotions can create. The lyrics on this release come from a mix of personal experiences and fantasy elements. Most of the were written during a time when Larissa was going through recovery from a surgery and was unable to speak, sing and barely able to stand up. So the frustration, sadness, anger and fear she felt during her recovery created “Pandora”.”

Canadian band CELESTIAL RUIN is styled after European Symphonic Rock/Metal but executed with a decidedly North American flavor. Combining a heavenly destruction of heavy riffs with beautiful melodies, CELESTIAL RUIN create catchy, singable melodies, and rich symphonic textures. The compositions are “epic” by all accounts. Lyrical themes are mainly drawn from fantasy and horror, sometimes implying deeper meanings, sometimes just celebrating the subject matter.
Based out of Vancouver, BC, CELESTIAL RUIN started taking the scene by storm with their debut album “The Awakening”. Receiving favorable reviews in publications such as Rockstar Weekly Magazine professing a 4/5 star rating declaring, “If The Awakening is only the beginning of things to come, you’d best get on board now while the getting’s good.”
After successful 2012 and 2013 summer tours, CELESTIAL RUIN was offered many opportunities that included opening slots with Stone Temple Pilots, Leaves Eyes, Moonspell and being a featured performer for Vancouver Alternative Fashion Week for two consecutive years.
CELESTIAL RUIN is always looking for the next unique avenue to expose their distinctive sound. “We play in the grey area of rock music, we are too heavy for rock, but not heavy enough for metal” comments vocalist Larissa Dawn.
This is a praise that has been mirrored in many live reviews including Beat Route Magazine stating, “Celestial Ruin appears to be in a sub-genre scene of one…their differences are working to their advantage”.
From September- December 2015 they completed a cross Canada tour (Out of Exile) and are now preparing for the release of their 2016 EP ‘Pandora’ produced by Joost Van Den Broek (Epica, Revamp, Xandria).
“As a significant jump forward from our debut album, from song writing to production, this EP was a journey that allowed to us grow, and we hope that fans will grow with us.” says Larissa Dawn.
A collaborative writing effort by CELESTIAL RUIN, the May 20th release of ‘Pandora’ will showcase the best of their best shared with fans new and old alike.

This Canadian act is sure to please a wide swath of fans on the melodic front…a strong EP that leaves the listener wanting just one or two more tracks. With the right push, Celestial Ruin should have little difficulty convincing the audiences of bands like Within Temptation, Nightwish, or even Evanescence.

It’s a intense experience reflecting a lot of passion that has gone into the making of Pandora. You’ll feel this when you take a closer ear to the guitar solos, the powerful vocals and the overall fine-tuned sound package the whole band banned on tape.

their ability to convey mood in such a convincing and effective manner is commendable. For those interested in a tight and purposeful symphonic rock performance, Pandora is worth looking into.
http://www.metalblast.net/indie_reviews/indie-wednesday-week-22-2016/

Heavy metal and heavy rock come together with symphonic elements to create Vancouver, Canada’s next awesome power combo. These five addictive songs of simultaneously vibrant and dark-as-night heavy music have impressed the hell out of me; if melodic metal is your cup of tea, they’ll likely please you, too.

‘Pandora’ a perfect EP that make you yearn for Celestial Ruin’s next full-length album.