Celestial Ruin creates songs that are instantly memorable with some beautiful melodies. I reviewed “The Awakening” in 2012 and while I liked it very much, I honestly feel that “Pandora” far surpasses it. Celestial Ruin has grown in song-writing, musicianship and presentation. Let’s hope that a full-length is not too far on the horizon. http://www.femmemetalwebzine.net/2016/07/05/celestial-ruin-pandora-ep-2016/ 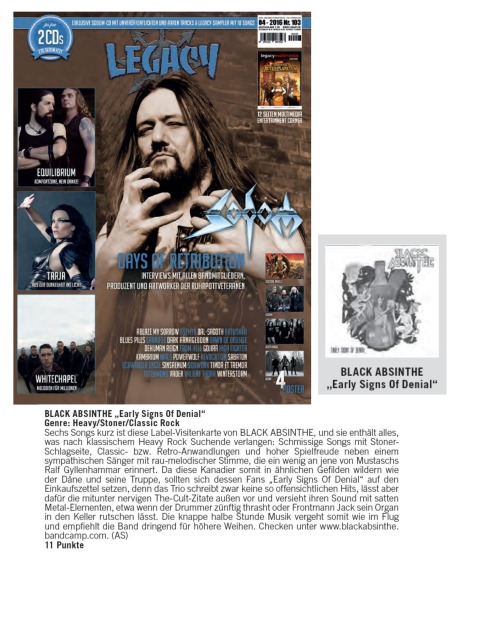 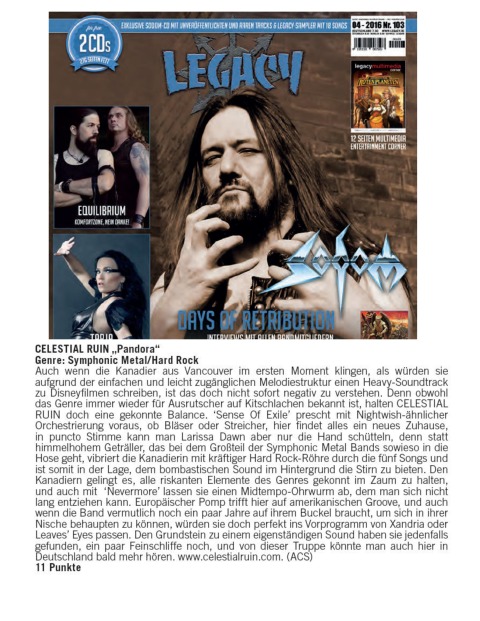 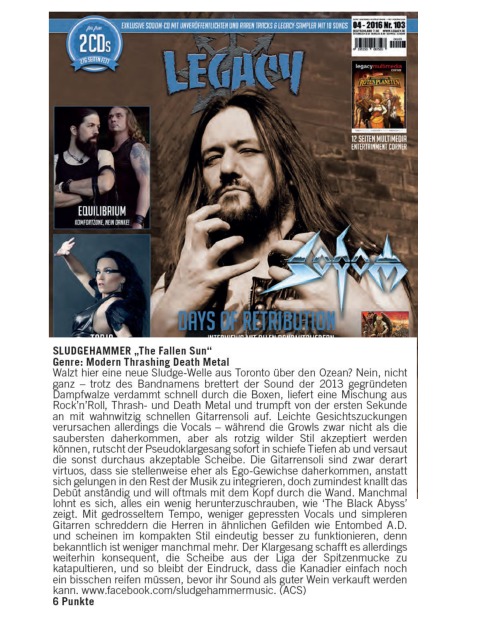 For fans of Evanescence, Nightwish, Revamp, Delain, Kamelot, Within Temptation

The band is looking for the following:

“Established Symphonic Hard Rock act Celestial Ruin is now auditioning lead guitarists. We have major shows on the horizon and need someone committed and available to tour, domestic and internationally. Our newest album was produced by famed European producer Joost Van Den Broek ( Epica, Revamp, After forever, Xandria). We are NOT looking for a hired gun or weekend warrior. Applications must have a demo and pic submitted. ALL responses with a demo and pic will be reviewed and responded too.”

Submissions can be sent to info@celestialruin.com.

The band’s new EP ‘Pandora’ was released last month on May 20th viaiTunes and www.CelestialRuin.com. Combining a heavenly destruction of heavy riffs with beautiful melodies, their catchy, singable and epic tunes draw on lyrical themes of fantasy and horror. A full stream can be heard at the following link: https://www.youtube.com/watch?v=GbcnZ2ICcgY

Canadian band CELESTIAL RUIN is styled after European Symphonic Rock/Metal but executed with a decidedly North American flavor. Combining a heavenly destruction of heavy riffs with beautiful melodies, CELESTIAL RUIN create catchy, singable melodies, and rich symphonic textures. The compositions are “epic” by all accounts. Lyrical themes are mainly drawn from fantasy and horror, sometimes implying deeper meanings, sometimes just celebrating the subject matter.
Based out of Vancouver, BC, CELESTIAL RUIN started taking the scene by storm with their debut album “The Awakening”. Receiving favorable reviews in publications such as Rockstar Weekly Magazine professing a 4/5 star rating declaring, “If The Awakening is only the beginning of things to come, you’d best get on board now while the getting’s good.”
After successful 2012 and 2013 summer tours, CELESTIAL RUIN was offered many opportunities that included opening slots with Stone Temple Pilots, Leaves Eyes, Moonspell and being a featured performer for Vancouver Alternative Fashion Week for two consecutive years.
CELESTIAL RUIN is always looking for the next unique avenue to expose their distinctive sound. “We play in the grey area of rock music, we are too heavy for rock, but not heavy enough for metal” comments vocalist Larissa Dawn.
This is a praise that has been mirrored in many live reviews including Beat Route Magazine stating, “Celestial Ruin appears to be in a sub-genre scene of one…their differences are working to their advantage”.
From September- December 2015 they completed a cross Canada tour (Out of Exile) and are now preparing for the release of their 2016 EP ‘Pandora’ produced by Joost Van Den Broek (Epica, Revamp, Xandria).
“As a significant jump forward from our debut album, from song writing to production, this EP was a journey that allowed to us grow, and we hope that fans will grow with us.” says Larissa Dawn.
A collaborative writing effort by CELESTIAL RUIN, the May 20th release of ‘Pandora’ will showcase the best of their best shared with fans new and old alike.

After hearing their latest album, Pandora, it’s pretty obvious to hear the hard rock influence, the catchy melodies, and atmospheres, really deeming this album ‘epic’ of all sorts. …I was very much pleased with this release, probably one of the best vocal performances of the year for me.