“The Loss of Beauty” is Shores Of Null’s fourth album and follows the acclaimed “Beyond The Shores (On Death And Dying)”, unanimously considered by fans and critics as one of the Doom Metal gems of recent years. Both albums were recorded between 2019 and early 2020, and although “The Loss of Beauty” was initially conceived as the band’s third album, ‘Beyond The Shores’ took its place as it better reflected the doom and gloom sentiment of the ‘annus horribilis’ 2020.

Across 11 tracks (plus two bonus tracks), Shores Of Null once again submerges listeners with tempestuous and turbulent riffs. The band continues to hone its sound and take its melancholic dark metal to new heights by mastering an assorted palette of genres with inbred poignancy. The lyrics celebrate beauty in imperfection and transience and are meant to be an invitation to seek beauty in little things, especially those unexpected and ephemeral.

The quintet of Shores of Null will be releasing singles over the following months to entice listeners further and have plans for a European tour to support the release. “The Loss of Beauty” has been shielded from the outside world until today, and it will finally see the light of day on March 24, 2023 via Spikerot Records.

“The Loss of Beauty” is dark and heavy, tinged with feelings of despair and melancholy. It is recommended for fans of Amorphs, Enslaved, and Paradise Lost.

About: Shores of Null stand out from their contemporaries with their ability to blend seemingly disparate elements into their sound, overwhelmingly heavy and soothing at the same time: blackened aggression stands alongside gothic-doom sections without either sounding out of place. Their music can be both melancholic yet majestic, made of chorale-like guitar textures across the instrument’s entire range, sustained by a powerful rhythmic section and punctuated by a refined mixture of clean and growled vocals, along with extensive use of pleasing vocal harmonies which have become the band’s trademark through the years.

The Rome-based metal band has been an unwavering presence within the metal underground since their musical outset in 2013, churning out three impressive records: the melodic and somber  “Quiescence” (Candlelight, 2014), the darker and more complex “Black Drapes For Tomorrow” (Candlelight/Spinefarm, 2017), and finally their most ambitious work to date “Beyond The Shores (On Death And Dying)” (Spikerot Records, 2020), a 38-minute long opus which continues to prove the band’s willingness to go off the beaten path while creating their ultimate doom manifesto.

The work, inspired by the five stages of grief formulated by the Swiss-American psychiatrist Elisabeth Kübler-Ross, has created quite a buzz in the underground, followed by the multi-award winning full-track video by Sanda Movies, an unprecedented output that has taken the heavy music hemisphere by storm.

The album sees guest appearances of the doom-titans Mikko Kotamäki (Swallow The Sun) and Thomas A.G. Jensen (Saturnus), along with the angelic voice of Elisabetta Marchetti (Inno). The band is able to present an even more diverse and eclectic sound on the album thanks to the addition of classical instruments like piano and violin, along with the return of the talented Marco “Cinghio” Mastrobuono (Hour Of Penance, Fleshgod Apocalypse) behind the production desk.

The band’s fourth album “The Loss Of Beauty”, recorded during the same sessions of “Beyond The Shores” is to be released on March 24, 2023. 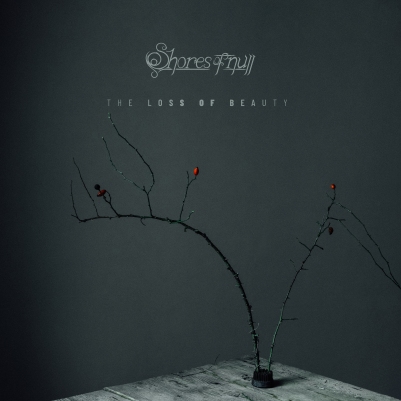 What the press is saying:

“Take a solid 40-minutes and give Beyond the Shores your full attention. It’s a special thing to get a lengthy track like this so well-executed and dripping with emotion. The heavy moments are gripping, and the sorrow-fueled moments feel serene. It all leads up to an impressive conclusion with just enough uplift and acceptance that’ll leave you quite impressed, and most importantly, want to take the journey for another listen. Longingly beautiful from start to finish.” – DeadRhetoric

“Shores of Null continues to impress and expand upon their doomy sound. An epic-length track worthy to sit amongst the best of these ventures (Edge of Sanity, Insomnium). Emotionally fulfilling and musically satisfying all at once.” – Dead Rhetoric (Best-of 2020)

“this album definitely is one of the best Doom Metal pieces I had the pleasure to look at in 2020. Once you plunge into its astonishing flow, there will be no escape from that majestic march through soaring soundscapes to those tear-drenched horizons.” – Rock Music Raider (Best of 2020)

“While the song / album is fairly slow for the most part, with a primary focus on the instrumentals, the musicianship delves into other genres along the way. Featuring some passages that are akin to that of more progressive metal, some sections even fall back into more hard rock. All this, before dropping back into some of the slowest doom metal I’ve encountered this year.” – Metal Injection

“it’s certainly ambitious (video for “Beyond the Shores (On Death and Dying)”), but if you have the time, it’s worth the watch. Steeped in quality and excellent videography, it definitely deserves the attention for the amount of effort used.” – Metal Injection

“Shores of Null rolled the dice with Beyond the Shores (On Death and Dying) and delivered in a big fucking way… Shores of Null have crafted something special; a heart-wrenchingly emotive and beautiful journey of sorrow, anguish, pain, and acceptance. Beyond the Shores (On Death and Dying) is a splendidly sombre, brilliantly written opus of commanding death-doom that demands attention.” – Teeth of The Divine

“With all that said, Shores of Null gambled heavily on this album, and in my eyes, it most certainly paid off handsomely. To make a one-song album that’s stretching near the 40-minute mark requires a hefty amount of guts to pull off, but in doing so, they’ve made something that takes the potential found on Quiescence, and adds a heaping amount of maturity and songwriting growth to the formula. The result is a fantastic album that sees Shores of Null standing tall among their doom and funeral doom contemporaries,2 as well as a guaranteed spot on my year-end list.” – Angry Metal Guy

“this album is phenomenal, both in terms of concept and its monumental delivery… with this magnum opus [Shores Of Null] have proved their position front and centre as depressed doom-titans…” – The Sleeping Shaman

“The greatest danger of a single track album is that such a lengthy and expansive piece of music can be difficult to maintain momentum and interest throughout. Shores of Null have definitely avoided this, and the album is not only interesting throughout, but thoroughly engrossing. This is music to lose yourself in, so that forty minutes seems to pass in the blink of an eye. I’m not sure if the band plans to play this album live, but if so, and if they have the chance to do so, it will be a phenomenal spectacle. Now, if you’ll excuse me, I’m off to play it again….” – The Progressive Aspect

“This album is incredibly dramatic and engrossing from start to finish, with the guest appearances, in particular, the female vocals and excellent violins, helping to elevate and oftentimes complement the music on this record quite significantly, turning what was already a great album into one of the musical highlights of 2020. In a year that has already seen a variety of great releases by bands with a more gothic sound and style, this is perhaps one of the more impressive and enduring ones, and easily stands as the best thing SHORES OF NULL have accomplished to date.” – Distorted Sound Mag

“Beyond The Shores (On Death and Dying)” is a near perfect, monumental achievement of doom.  I can’t imagine any fan of the style not finding something here to enjoy.” – Metal Temple

“A single track of incredibly well-realised melodic doom metal, layered with all sorts of treats and nuanced delivery.” – Wonderbox Metal

“A piece of delicious despair, delivered on a platter of storm-ridden and excellently executed Doom Metal. A record that left anybody else in the genre in 2020 quaking in their wake.” – Rock Music Raider

“their most intricate and brooding work to date… grandiose emotional impact.” – Metal Storm

“Every element plays a powerful role across this well thought out and constructed release. From the haunting piano and violins, the spoken elements, cleans and growls, all the way through to the crushing Doom rich segments, this takes you on a convoluted listening journey that, although at times painfully emotive for the listener, is at the same time an utterly superb listen that you want to tear yourself away from, yet can’t. Produced by Marco “Cinghio” Mastrobuono (Hour Of Penance, Fleshgod Apocalypse) ‘Beyond the Shores (On Death and Dying) is a magnificently powerful and moving release. Recommended for any and all Doom fans, especially fans of My Dying Bride, Paradise Lost, Swallow the Sun and Amorphis.” – Metal Talk

“Shores of Null stand out from their contemporaries in their ability to blend seemingly disparate elements and to sound overwhelmingly heavy and soothing at the same time. Blackened aggression stands alongside gothic-doom sections without either sounding out of place. A powerful monument to the medium of depressive doom (recommended especially fans of My Dying Bride, Paradise Lost, and Amorphis)”- Doomed and Stoned

“Beyond the Shores (On Death and Dying) might just be a single track but it is as epic and exhausting as a ten-track album. The lone track, nearly 40 minutes long and broken into segments that bury the mind under mountains of gloom and doom.” – Games, Brrraaains & A Head-Banging Life

“You are about to live an unique experience created by Shores of Null. It is complex to describe such an experience with words. If the song has to be listened in a single take, it develops different and complementary ambiences. The band’s melancholic and heavy basis permanently stays, and guests add their specific touch, beginning with Mikko Kotamäki and Thomas A G Jensen’s howlings, that enrich the group’s intense rhythmic with this melodic oppression… Shores of Null took a huge risk with this new album. However, Beyond the Shores (on Death and Dying) is an unusually pure treasure, of which sparkle will shine for years on the band’s career, which seems to be at its peak. 9.5/10” – Acta Infernalis

“This album is a giant step, as they haven’t released a track over 10 minutes up to this point in their career. The concept is strong, based on psychiatrist Elisabeth Kubler-Ross’ five stages of grief (denial, anger, bargaining, depression, acceptance). Torment echoes through the whole song, as the main character struggles with loss. The journey builds with an unrushed pace, giving the listener time to sink into its darkness. Shores Of Null are daring with this new effort, and those with the patience for a song this long should be satisfied.” – Heavy Music Headquarters