“Fans will recognize a harder-hitting sound, more depth in songwriting, increased dynamics, and darker themes, along with more vulnerable and introspective lyrics. We’ve matured and grown as musicians. New drummer Simon has added a lot of depth to the sound, and bass player Sean becoming part of the writing process has added a new dimension. The band is a more cohesive unit and it shows in the material.” – Alienator

“Noisy post-hardcore sludge, full of energy and rage… a genuine ass-kicker of a record.” – Decibel

“This band is burly, grimy, and the sonic manifestation of discontent. If it’s motivational music you seek, back away slowly. Alienatör ply their trade in the margins of metal, with elements of sludge, noise rock, hardcore, heavy metal, and crust punk. Listeners of Pariahs, the band’s debut full-length, will hear shades of Unsane, Red Fang, Cursed, Kvelertak, Acid Bath, and Cancer Bats, among other guitar-heavy acts by whom sophistication and polish are eschewed.” – Lambgoat

“Pariahs shows Alienatör firing all of their creative cylinders and marks a multifaceted, all-consuming sludge opera delivered with convincing force and accents.” – Idioteq

“From beginning to end Alienatör offers up a truly murky, chunky yet noise filled sound that tears at your ear drums, but in the best possible way. Each track is a madhouse of artery stopping, head banging sludge and noise rock that you cannot simply turn away from.” – Cadaver Garden

“Alienator are miserable and they’d like you to join them.” – Lambgoat

The album as a whole (LYRICALLY & MUSICALLY) explained:

Dark and cathartic, exploring personal themes, as well as racism, and abuse of power in Canada and the erosion of truth we’ve seen in modern times.

Revisionist History –  Right out of the gate we have the rhythm section carrying the song before a snakey guitar line weaves in over top. That’s something we weren’t able to do when we wrote the first album as a 2-piece. The odd-time signature gives it an off-kilter feel. The lyrics are about the erosion of truth in our public discourse and the dangerous narcissists who create their own reality and try to shove it down our throats.

Loss Leader – This song is about grief and loss, especially as a result of the opioid crisis. I’ve experienced a lot of deaths and tragedies personally and professionally and this song is about dealing with that. Musically, it’s got a proggier feel than anything we’ve done previously and a bit of a middle-eastern influence. It’s also the first song this line-up of the band wrote together.

Blood Red Blood – This opening riff is one I had kicking around for a while. We counted it as 9/8 or something wacky. Sean wrote the rest of the music around it. I like the breakdown in the middle a lot. The title was inspired by the Wilco song Sky Blue Sky, so there’s an influence you probably weren’t expecting. I wrote lyrics about the cycle of violence, toxic masculinity and  how “hurt people hurt people.” Often, what we do to others gets paid back to us in the end; “blood in, blood out.”

Regrets – One of the more heartfelt and emotional songs we’ve done, this one deals with personal struggles and the passage of time. I like the energy and looser feel of it, musically. Sean’s really standing on his head with some of the bass fills on this one, especially in the middle section, but it’s all tasteful and fits perfectly, elevating the whole song. Simon finds interesting ways to fill the empty spaces on the drums. It gives a new dimension to our sound.

The Priest – The darkest song I’ve ever written. This is another one, where the rhythm section really drives the song and the guitar comes in, jagged and angular on top. Ralph Rowe was an Anglican Priest who molested countless kids from fly-in reserves in the 70s and 80s. He ruined so many lives and then plea-bargained for a prison sentence that was a slap on the wrist. There’s a documentary about him called “Survivor’s Rowe.” Here, he serves as an example of the type of abuses of power that we allow those who we place in positions of trust.

We put a lot of work into the dynamics of this one. Lots of tension and release and then the calm atmospheric part toward the end, before we bring the hammer down again.

The Less Dead – The “less dead,” is a term for marginalized members of society who are considered less of a priority for police investigations and are therefore are easy victims for predators. Sex workers, people of colour, people with addictions or mental health issues, members of the LGBTQ community, and the poor fit in this category.

The closest to a straight-ahead punk song on the album but Simon’s crazy tom work in the bridge really elevates it. Very fun to play live.

Flat Earth Society –  Remember when we used to think that increased access to information would make humanity smarter? This song is a reaction to the age of misinformation we currently find ourselves in.

COVID conspiracies, climate denialism, and the age of social media propaganda have altered our perception of reality and divided our society. This song is about the echo chambers we create for ourselves and how we are being manipulated by those in power. We opened for Soulfly before the pandemic and Sean said watching the people bounce up and down on the dance floor while they played contributed to the feel of the breakdown.

Irreconcilable – This one is about Canada’s history of genocide against Indigenous peoples, which was brought back to the forefront of public consciousness when hundreds of graves were found on the sites of former residential schools. This song is about the relationship of denial that white settlers have with colonialism, how we refuse to “reconcile,” what’s been done, and our role in it. Great dynamics in this one, as it ramps up from a slow simmer into a crushing chorus and back down again.

Your Funeral – This one’s a bit different with the tension of the jerky snare-driven rhythm and then the straight-ahead release of the chorus. I find it interesting to juxtapose a kind of uplifting chord progression and driving beat with lyrics that are bleak and depressing. This one’s about being a wage slave, feeling like you’re a cog in the machine, wasting your life, and going through the motions.

Wounded Birds – This one is a kind of anthem for all the broken people, those who suffer from trauma, depression, substance issues and the like. I’ve had my own struggles so this one’s a bit cathartic, lyrically. Musically, it shows us branching out and experimenting more, adding a lot more depth.

Dark Matters – A pretty unique tune in our catalogue. It’s about the things that keep you awake at night; lies you’ve told, people you’ve lied cheated, or stolen from. I imagine one of our favourite politicians feeling some of these things late at night if they have any conscience left. It’s fun for me to take on the role of the negative voices in someone’s head, as I do here. Musically, it’s swirling and chaotic with some flashes of light in the darkness and gloom. An unsettling way to fade the record into black.

1. Recording was done at bass player Sean Skillen’s Exit Music studio. Sean joined the band during the recording of the previous album, adding bass to the already existing guitar and drum tracks. This is the first recording written as a 3-piece with distinct bass and guitar parts.

2. Simon Paquette’s first album as a drummer. Has brought new energy and versatility to the band. 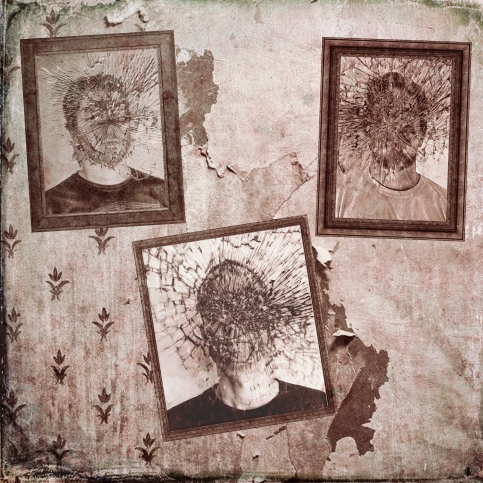 Hailing from Thunder Bay, ON, Canada, Alienatör is a sludge metal band that combines punk, hardcore, and noise rock elements into a stripped-down package, full of razor-sharp riffs and memorable hooks.

Their debut album, “Pariahs,” released in 2109 moves from fast and aggressive to slow and swampy with touches of experimental weirdness. Many of the lyrics are about how we numb ourselves to the pain and disappointment of everyday life.

Fast forward to 2022, and the band is ready to unleash their follow-up, entitled “Regrets,” which introduces new drummer Simon Paquette to the fold. The album is bleak and abrasive, with moments of calm, melody, and beauty to juxtapose against the ugliness. Raw, uncompromising, and dark, it is emotionally heavy music that reflects a chaotic time in history.