“In This Dying Sun shows a certain evolution from our previous effort. We still implement a lot of our core elements which are ambience, groove and melodies, but with this record, we felt the need to explore faster tempos with machine gun-like riffs. This allowed us to expand on subjects and textures from before. We never lost track of the bigness, especially with Tue Madsen mixing this record. In our talks, I really emphasized that to him, even though songs are faster, we still want them to sound huge. And boy did he deliver. Sonically this record has been the best one. Tue Madsen also mastered it. He was even kind enough to feature our single In This Dying Sun for his drum sample pack through Drum Forge because he really dug the song. We also brought in our new bass player Brian Fausnaugh full fold. He had recorded previously with us in some songs, so It was a no-brainer. Lyrically we still draw from books, movies, series, and whatever draws our attention. For this EP, Andre and I (jay) collaborated closer and wrote more together while the recording process was taking place. The band continues to evolve and In This Dying Sun showcases that.” – Jay Arriaga – Drums, Keyboards, Samples – Scattered Storm

“Their music is dark and futuristic with plenty of ambience to balance the heavy.” – New Noise Magazine  (2021 – Oblivion)

“Chugging guitars, punishing drums, brutal, throat throttling vocals… Yep, it’s all here and a lot more with the latest music video for “Necronomicon” from Scattered Storm. Reminding you of what live music used to be all about, the band torches the room in this electric performance video, as an eager audience beholds the musical greatness that is this Texas supergroup.” – V13  (2021 – Oblivion)

“Their sound has been compared to the likes of Fear Factory, Gojira, Messuggah & TesseracT, & their new single, ‘Kingslayer” definitely would fit in the realm of HEAVINESS.” – KLAQ 95.5 FM (El Paso, TX) (2021 – Oblivion)

On their Oblivion EP, Scattered Storm give stomping grooves and bouncy breakdowns a cinematic flair, as electronics and orchestration add dimensions to their sound. Whether it’s the “2001: A Space Odyssey”-inspired ambient outro to “Kingslayer” or the mournful closing ballad “Scattered Storm,” the band doesn’t hesitate to offer different sides to their music, which is a commendable trait for a band in their infancy.” – Heavy Music Headquarters (EP Review 2021 – Oblivion)

““Kingslayer” was chosen as the preceding single and it’s easy to see why as in one single cut, it envelopes the bands sound as a whole, the Stanley Kubrick inspired space like ending being a piece of ambient bliss.” – Metal Noise (EP Review 2021 – Oblivion)

“The band runs through a number of different styles here, from elements of the djent orientation to thrash metal tinged escapades, ambient music as well as majestic gliding synth creations, classic era progressive metal and electronic metal also finds their way on to this EP. The vocal style mainly alternates between clean melodic vocals and a raspier, aggressive one that has something of a hardcore touch to it. That the songs are dynamic is perhaps a detail that should be obvious. An EP for those who like their metal varied, eclectic and probably progressive in nature.” – The Viking In The Wilderness (EP Review 2021 – Oblivion)

“Scattered Storm has produced an EP with ‘Oblivion’ that continues to fascinate. You never really know what’s coming. It can be very strong, especially with the groove in the whole sound and you can also hear that the band dares to experiment.” – Metal Experience (EP Review 2021 – Oblivion)

“From the beginning, there was a very clear understanding of every detail they wanted to incorporate. From the very tuning of the 7 and 8 string guitars and the very specific tonality, they produce the ambience provided by the keyboards to layers and layers of vocals to really convey Acosta’s sound. This is all finished off with the main focus, that catchy riff and rhythm to have the songs stay on people’s minds and headbanging of course.” Hard Rock Heavy Metal (EP Review 2021 – Oblivion) 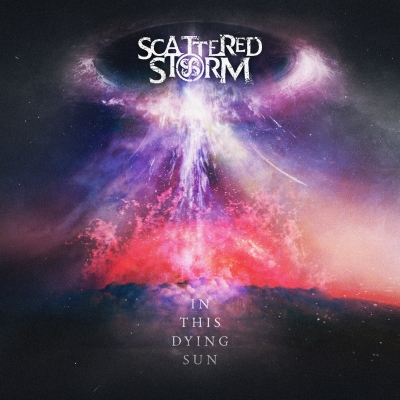 The album as a whole (LYRICALLY & MUSICALLY) explained:

In This Dying Sun takes off from where Oblivion left off, but it felt even more darker and proggy. It still has the hooks but the vocals have evolved more and synths took a back step for more guitar work. Some of the songs are faster-paced as well giving it a more driving force.

1. Bloody Love. Bloody Love deals with toxic relationships in a nutshell. How we sometimes succumb to the other party and let ourselves go even if it’s destroying us inside. The music emulates the brutal emotional aspects going through our heads. The ending is the culmination of that torture by being like an addict and asking for more of that painful love.

2. The Process. Talks about our evolution as human beings and how the systematic process imposed by our daily routines has left us empty, slaving into the future with no sense of self. Basically just being cattle being pulled from one end to the other and not having a say about it. Ultimately trying to break free and set the process on fire.

3. Hollow. This song talks about the process of putting yourself back together after being broken to the core.  Pretty much burying a dead feeling, love or anything that causes us so much pain by being there and burying yourself to try and come out of it ultimately feeling more empty than before with no purpose. Ultimately winning the battle of forgetting but coming out of it almost drained.

4. In This Dying Sun. This pretty much talks about our dying planet. Or even a dying galaxy. Which resonates deeply with what have we been doing to our planet for so long and the consequences of that. Death, decay, nothing good coming out of it really. In the absence of light, there is only darkness. The song is fast and precise almost Fear Factorish-like, but it simulates a fast and imploding galaxy.

5. Seen. This was a very complex song to write vocals to. Because it has many changes. Many ups and downs. Overall it is a very dark song. Its slow riffs and rhythms make it feel like you are in Darth Vader’s home. We used a lot Star Wars references on this song. Yoda’s teachings. The evolution of being good but then going to a dark place. Fear is the path we yell. As in Fear leads to anger, anger leads to pain, pain leads to suffering. All indications that you are pretty much heading to a dark place.

1.- We are always the band that sounds different on live shows. Everyone is blasting away fast and we are slow, dark demons bringing that contrast to shows. Fans seem to notice that a lot.

2.- We all got Covid on our Mexico Tour after not getting it the whole pandemic. It took just one guy on the tour bus!

3. Brian our current bass payer had recorded on Oblivion as well. He only recorded bass on Bloody Love for this album not even being in the band. He joined afterward. Scattered Storm is an El Paso, Texas-based metal band which formed three years ago with the collaboration between Jay Arriaga (drums) from No Life on Earth, Years of Cold, and Kevin Armstrong (guitar) from Mondoshawan, Section 6. From there Andre Acosta from Pissing Razors, Hereafter the Wave and current No Life on Earth frontman joined the ranks on vocals. Having recorded a couple of songs on Bass for both Oblivion and In This Dying Sun, Brian Fausnaugh (Random Allusion, Limerance) finally joined the ranks full time replacing Eddie Garcia on bass. Scattered Storm recorded In This Dying Sun in 2021 at Javier’s Studio Empty Paradise Studios for its release on November 11th, 2022 via Blood Blast Distribution to follow their 2021 debut EP “Oblivion”.