For fans of Arch Enemy, Gojira, At The Gates, Amorphis, In Flames

“Our fans will be surprised to hear some of our familiar songs, with a new voice as this is the first time Ben and I recorded vocals for. Poisoning Imagination, as the newest song of the EP, will also show the path that the band is moving forward.” – Emine

“I think this collection of songs is a natural progression and representation of the band’s sound – everyone has their moments to ‘shine’ and be featured, and this is the first time both of our vocalists – Ben and Emine – sing on the record, which has been really cool to see and hear.” – Mike

“I’ll be damned if “Threads Unbind” doesn’t provide an amazing taste immediately. We are treated to just four songs with their debut EP, but they are filled to the brim with everything that I’ve come to associate with a very well done piece of melo-death from the melody that actually sounds good, never disappoints when it goes to pull back before a well-timed punch, and gives us plenty of hints as to just what exactly Whispers in the Maze is capable of.” – Head Banger Reviews

“I am compelled to say that WHISPERS IN THE MAZE certainly outdone themselves here for a 1st attempt, a remarkably splendid slab of enjoyably entertaining talent that pulses with potential & enlightening fulfilment – check it out – melo-death enthusiasts are ensured to get their guaranteed head-banging fix here…a borderline foundation of finesse & fiercely frenzied domination.” – Metal Temple

“The band started off fast, hard, and shoving brutal reality right in your face. I’ve got to say the did a splendid job.” – The Music Below

“Threads Unbind is a promising display of power” – Acta Infernalis

“Threads Unbind is a surprisingly mature effort from a young band and that means melodic death metal fans should put Whispers in the Maze on the radar for their next effort.” – Metal Crypt 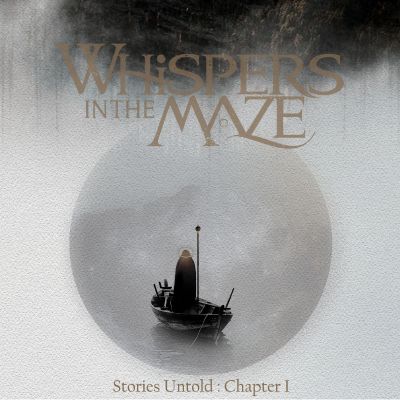 The EP as a whole (LYRICALLY & MUSICALLY)

Stories Untold is a melodic death metal record with an emphasis on melodies, elements of black and doom sprinkled here and there, and two vocalists bring a range of different vocal styles. Lyrically, Stories Untold is introspective, with our inner voices doing most of the talking.

Lyrics
This song is about a losing battle against anxiety. Whereas most songs on the topic would generally tell a story from the viewpoint of the person suffering from it, this one is told from the viewpoint of Anxiety itself, personified as a kind of imaginary enemy. The song’s title, ‘Poisoning Imagination’, reflects this idea of self-inflicted harm. I chose this viewpoint as I prefer to sing from a position of strength, rather than weakness and self-pity. The energy is totally different. – Ben

Music
I’m the Tribulation fan in the band, but I can’t help but find that this song has some Tribulation influences somehow. Musically, I find it’s a good companion song to Ink. – Ben

Musically ‘Poisoning Imagination” is probably our most energetic starting song, and I especially like that the vocals start right away. It is also a song that began at the jam space rather than a riff being brought, so it is different in that sense. Despite the lyrics being about anxiety, I find this song fun and highly energetic. – Emine

Lyrics
Written by our original singer Zach Dean, Ink’s lyrics are about the alienation that is organized religion. – Ben

Music
“Ink” starts with a very Middle-Eastern-sounding riff. And given my origins, sometimes I am thought to be behind that riff, but that is not the case! It was actually Zach (our first vocalist and then second guitarist, now of Messora) who wrote that riff. And we actually recorded that song as a single a few years ago. But we decided to rerecord it as the new members added new flavours to the music. We always have the mindset that “songs can change till it is recorded.” We surpassed that with Ink! – Emine

Ink was built around a “middle eastern sounding” riff brought to the jam room by Zach Dean, our original vocalist who also covered second guitar live for a while. The rest grew organically from there. The middle part of the song was later modified after Vitto joined us. You can dig out our old demo recording of Ink if you want to hear the difference. – Ben

3. Chained Till The Grave

Lyrics
Thematically a companion song to Ink and also written by original vocalist Zach Dean, Chained Till the Grave is about the prisons that are pre-formatted belief systems and coming to that realization, sometimes too late… – Ben

Music
Sometimes a riff can wait for years to find a home. “Chained Till The Grave”s intro was written many years ago, but it just couldn’t find the right home until it was played by this band. And the wait definitely paid off. It is not necessarily unique to this song, but I love how the two guitars mangle each other in this song and weave something beautiful. – Emine

Musically Chained Till The Grave has a doomy intro, a chuggy transition, that then goes into a neo-classical tapping part, before ending with a melodic outro. – Ben

Lyrics
Written by original vocalist Zach Dean, the lyrics of Behind Your Eyes are about carrying a self-destructive addiction or mental condition and the urge to succumb to it. – Ben

Music
Behind Your Eyes owes a lot to our former guitarist Amaury and his Gojira influences. You can hear that in the pick scrapes and the bent tremolo notes. An intro saturated with flanger and phaser effects and the clean vocal chorus that could belong in a rock song are other highlights of this song – Ben

“Behind Your Eyes” is the first song I ever recorded lead vocals for. And incorporating clean vocals was a very fun experience for me, and I believe it added something different to its vibe. In terms of transitions, there is a phase difference in when my guitar does a transition and joins the rest of the band. It is almost like “I am behind”—very fitting to the title – Emine 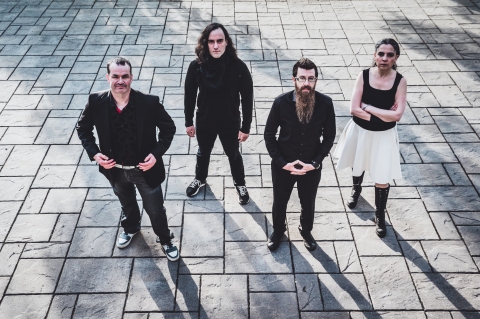 A metal band without borders, Whispers In The Maze gathers its members from all around the world, bringing together as one a myriad of musical influences and creative visions. Their guitars work together to create a lush harmonic soundscape, held up by the melodic rhythm and fretless leads of the bass, all tied together by the precision and groove of the drums. This unique melodic, rhythmic, and progressive blend is the canvas on which the brutal vocals paint images of war, rebellion, hopelessness, and death. Recently recorded their debut EP, with lots of shows on the horizon, they will only continue to create, evolve and conquer, with no plans to slow down. The maze is ever-growing. Lose yourself. Follow the whispers.

1. In 2015, Emine had just moved to Ottawa from British Columbia and Ben from New Brunswick. Both had to leave musical projects behind before moving and both were looking to start anew in Ottawa. They met through a Kijiji ad and discovered a shared interest in melodic death metal, especially the Northern European variety. Along with original drummer Blaze Brdar, they started two bands: Projekt Göthenburg, to cover their favourite classic melodeath tunes, and Whispers In The Maze, to put out their own original music. Projekt Göthenburg allowed them to start playing shows in Ottawa and discover the local scene before the first Whispers In The Maze was even written. Projekt Göthenburg still exists today, although as a completely separate entity and with different musicians. – Ben

2. The first time I jammed with Ben was online, on a (now closed) platform called BandHub. Ben was very proactive and responded to my ad in Kijiji even before he moved to Gatineau. We didn’t wait to be in the same city and started jamming online (in 2015 – way before Covid and online collaborations were not this common), and we have been jamming together since! – Emine

3. I unknowingly had already heard Whispers at some point before actually meeting them – I rehearse with one of my other bands, Dead Culture Society, in the same rehearsal warehouse, so it was serendipitous that I should be answering an ad looking for a drummer for a band located about 100 feet from where I was already rehearsing.  – Mike

4. I am probably the only member of the band who cannot listen to doom metal, and I am responsible for the most doomish intro we have in Chained Till The Grave. And I don’t regret it, things turned out great! – Emine