“The Descent is really meant to be listened to from start to finish. Many times!! It has lots of recurrent themes, sometimes hidden, sometimes obvious, so the hard listeners really get rewarded.

As for the singles, Hoax is very lively and reveals the band from a completely new angle. We expect fans to be surprised (which is why we called it Hoax!). Breach, on the other side, is a classic Cydemind song. Fans will enjoy its heavy riffs and crazy solos.” – Cydemind

“Violin metal shredders, Cydemind, has just released a beautiful new video for their “Winter” single, using the gorgeous backdrop of Quebec, Canada. The neo-classical prog track showcases the amazing abilities of this young band on the rise, with captivating hooks that’ll leave you awestruck and hitting up their Bandcamp page for more!” – Metal Injection

“The instrumental band puts the violin front and center, which is strange (if not unheard of) in and of itself. They’ve also released a sweet cover of Vivaldi’s “L’inverno” (“Winter”), from The Four Seasons, which is definitely the first time in the 12+ years of MetalSucks that we’ve had to type that sentence… and they’ve done so when we’re just about a week away from the first day of spring, which was a ballsy decision. And on top of all of that, they made a really, really beautiful video for the track out on the frozen tundras of Québec. Do they have tundras in Québec? Whatever. The video looks really cool. Also, cold. I got mild frostbite just watching it.” – Metal Sucks

“An epic album in every sense of the word” – Games, Brrraaains & A Head-Banging Life

“Cydemind have an excellent album on their hands with “Erosion.”” – Progressive Music Planet

“Everything a person could want in his or her progressive metal is contained within the album’s six tracks. Heavy, complex riffs? Check. Knotty, constantly-shifting time signatures? Check. Shreddy solos? Double check. Winding, non-linear song structures? Epic track lengths? Uplifting melodies? Check, check, and check. And then there’s that violin. It’s pretty clear from the first few notes that Olivier Allard has classical training, because he attacks his instrument like Yngwie Malmsteen with a bow.” – Indy Metal Vault

“Cydemind have captured a sound that I have spent a long time searching for. Combining the modern progressive style of bands such as Dream Theater and Haken, with some exceptional violin at the forefront to really stand out from the crowd.” – Belwood Music

“Out of Montreal, Quebec, Canada could be the next big musical act in the world of instrumental progressive metal, and that band is known as CYDEMIND…The beauty of this record is that the entire record stands out, yet the flow of the musicianship and arrangements flow together like that expensive wine that is aged over time and that cheese that is cured to where it has its perfect, exquisite taste to it. ” – Muen Magazine

“Bottom line, “Erosion” is a glorious album that is worthy of any Metal… nay, any music collection. It’s simply wonderful music to listen to.” – 925 Rebellion

“Cydemind have shown me two things on this debut album: they’re damn good musicians, and they have the ability to write compelling music that sticks with you. ” – Angry Metal Guy

“Cydemind are the find of the month, hell maybe even the year.” – Wyrd Ways Rock Show 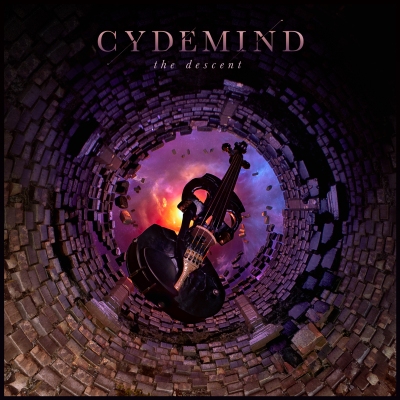 The album as a whole explained:

Cydemind will make its return with 7 new tracks, on an album that lasts just under 60 minutes. “With The Descent, we musically explored the themes of obsessions and the abysses into which they can plunge the human mind,” says Olivier Allard, violinist.

“Structurally, the album really represents a descent into hell, ” explains guitarist Kevin Paquet. The first track, Obsessions, acts as an opening. There are rhythmic and melodic motifs from each track on the album. The opening melody acts a bit like the leitmotif of the obsession (whichever it is) and comes up several times throughout the album. Subsequently, the album continues with Hoax, which incorporates several elements of funk. As the name suggests, you should not expect the album to respect that tone; on the contrary, the music gradually turns into something much darker and complex.”

Obsessions : The first track, Obsessions, acts as an opening. There are rhythmic and melodic motifs from each track on the album. The opening melody acts a bit like the leitmotif of the obsession (whichever it is) and comes up several times throughout the album. It might seem too much to grasp at the first listen but once you’ve been through the whole album, going back to this one makes much more sense.

Hoax : Hoax is one of the first songs we wrote for the new album, so it’s been finished for a while. It took us 3 or 4 days to write that one (it usually takes 3 or 4 months to finish one!), so it all came up pretty instinctively. We like to brand Hoax as a Funk Metal song because it really is borrowing vibes from both genres. We always liked funk bands like Vulfpeck or Snarky Puppy, and we always felt like their music would sound well with a little metal injection. So it’s basically what we did!

Breach : It’s a high-energy song that we believe is going to be appreciated by many fans! While Hoax may have surprised prog fans, Breach is more in line with the classic sounds of prog metal (if there can ever be anything classic about prog!).  It’s got hard riffs, a captivating chorus and unleashed solos. »

Call of The Void : The darkest, most complex song of the album. This song has a big narrative structure in it. It’s very easy to imagine a story with this one. We like to think we’re on a ship, exploring dark places after dark places!

Hemlock : Longest song on the album. It starts with a guitar motif that is going to come back throughout the song. After the big, epic conclusion of Call Of The Void, it feels good to come back to something softer. The song becomes heavier and heavier, and goes into a middle section we like to call Maelstrom. Really fun to play. There’s also a very long, melancholic guitar solo that leads to a grandiose, groovy finale, where the initial motif of the guitar comes back in a triumphant way.

Slumber : Slumber is a well-earned rest. Smooth, airy, and mysterious, it’s just soothing to close your eyes and let this one flow, after all the drama that went throughout the album.

The Last Stone : Even though it’s the last song of the album, The Last Stone was one of the first songs to be finished. Fans will maybe recognize some Erosion influence in it as it was written during the last weeks prior to Erosion’s release.  The Last Stone uses the obsessions leitmotif quite a bit, and also the last melodic piano line of Slumber, which is going to come back in different ways throughout the song. Very heavy riffs, very catchy choruses, crazy solos, and hovering ending; we think it’s an epic finale!

1. There’s the Batman (1989) theme hidden in Call of the Void!
2. Call Of The Void’s main riff is inspired by Hago’s Ezekiel 1.4
3. You can hear an alternate version of Slumber for the video Game Navyblue & The Spectrum Killers.
4. Some parts of the writing, recording and editing process took place in Malpeque, Prince Edward’s Island, where the band has a cottage.

That’s how violinist Olivier Allard describes the sound of CYDEMIND.

Mixing progressive rock, jazz, classical, and metal, Montreal-based CYDEMIND is a unique sounding group, one we’ll surely be hearing much more from in the future. Influenced by such bands as Dream Theater, Symphony X, Haken, and jazzmen like Avishai Cohen and Tigran Hamasyan, CYDEMIND has a sound that appeals to a broad audience.

CYDEMIND’s first release, EP ‘Through Mists and Ages’, dates back to 2014. It is soon after this release that their first single ‘What Remains’ came out. After a writing period that allowed for the band to refine their sound, the quintet (violin, bass, piano, guitar, drums) came back with their first full-length album. Titled ‘Erosion’, its six tracks are centered around the idea of nature’s persistence through time. Epic is quite certainly the word here, with one track clocking in at an impressive 27 minutes. ‘Erosion’ was released with critical acclaim :

“Cydemind have an excellent album on their hands with ‘Erosion’.” – Progressive Music Planet

“Allard’s playing is by turns dizzyingly nimble and achingly plangent, and the band – park the showboating and pull relentlessly in the same coherent, melodic direction”. – Prog Magazine

CYDEMIND then diverted from the usual metal band musical trajectory in order to produce music for the indie video game ‘Navyblue and the Spectrum Killers’. The game was released in September 2018 and is available on Steam. In addition to composing the entirety of the game’s soundtrack, CYDEMIND also released two singles ‘Navyblue’ and ‘Lights of Iberia’ as bonus content for the game.

To further expand their musical soundscape and reach new audiences, the versatile band then released its first music video ‘Winter’ in March 2019. The single is an arrangement of Vivaldi’s ‘Winter violin concerto’ from the Four Seasons. Shot throughout various locations in Quebec, Canada, the video poeticizes the beauty of Canadian winters while emphasizing the band’s energetic performance.

Always looking for novel and rewarding experiences, Cydemind then collaborated in producing the soundtrack for the post-apocalyptic contemporary theater play ‘’The Employees’’, which was performed in various theaters throughout Canada during the 2021-2022 theater season.

Five years after the release of Erosion, the band is releasing their much anticipated second full-length album called The Descent. Musically and thematically darker than its predecessor, The Descent delves into the concept of obsessions and the abysses into which they can plunge the human mind. Cydemind’s The Descent will be out on November 4, 2022, on all digital platforms.

In addition to their significant recording experiences, the band has performed numerous times throughout the Montreal area since 2011 in such venues as the Foufounes Électriques, the Katacombes, the Plaza Theater, and others. In 2017, they also directed the first edition of Proggy Nights in Canada, a small tour gathering of 3 Canadian prog bands in Quebec City, Montreal, and Toronto.