EATEN BY SHARKS Will Ignite Your Thalassophobia With “Depth Charge” 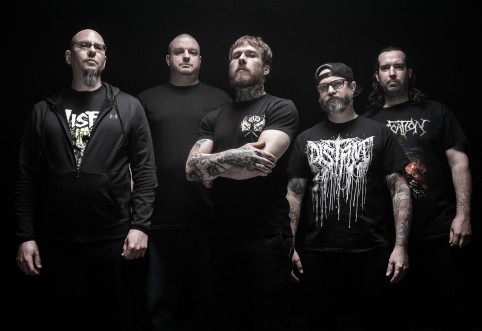 Thalassophobia – the persistent and intense fear of deep bodies of water such as the ocean. The feeling of something underneath you, that you can’t see. The exact feeling that Eaten By Sharks channel in their new album “Eradication” and especially so in the latest single “Depth Charge”. Along with that sinking feeling in the pit of your stomach, you can also expect shredding riffs, slick grooves, and intense vocals, particularly at the end.

Through the single, the listener is thrust into a first-person view of the horrors of a shark attack. Being dragged down into what could be the mouth of hell. Escape is not possible. All hope fades as the light from the surface disappears leaving you with nothing but a broken shell of a body, until even that gets devoured. The band elaborates:

“’Depth Charge’ eases you into the water with a groovy riff, led by the rhythm section, however, when the vocals kick in, it’s well worth the wait! The instrumental background is filled with whammy tricks and sweep picks, held together with some two-step and slick double-kicking beats. Matt has a very razor-toothed approach to the vocals, switching up styles and phrasing. Again, all the good stuff is saved up till the end, he lays down a sick death rap, channeling a serial killer type of cadence when sawing apart mountains of dead bodies. We had to pay the lyric video guys twice as much because they dislocated their fingers typing out the savagery.”

This is the third of three singles being released ahead of the album and together they form a very complete picture of what listeners can expect in this first-person horror experience. Along with their brand of technical death metal, Eaten By Sharks channel their love for horror movies into their nautical themes. They also cite a strong appreciation for sharks and their amazing nature, adaptability, and maintenance of natural equilibrium. Nature isn’t always nice and they like to celebrate the wickedness.

Eaten By Sharks is recommended listening for fans of Revocation, Gojira, and Despised Icon.

The music video for “Depth Charge” can be viewed and heard via its premiere on MetalInjection HERE.

A different type of beast has emerged from the murky depths of the Niagara metal scene. Eaten By Sharks is prepared to usher in a new wave of aquatic brutality, and devastate the landscape with a perfect blend of technical precision and unbridled aggression. The wait is over. There is blood in the water. The feeding frenzy is about to begin…..

Shared Stage with:
Revocation, The Faceless, Dying Fetus, First Fragment, Beyond Creation, Emmure, Upon A Burning Body, Beneath the Massacre, Brought By Pain

“Shit, did they put on a solid show and constantly required crowd interaction. They seamlessly blended classic and modern death metal with some technical flare here and there. I was thoroughly impressed with this awesome band, and can only add another solid band to the ever-growing laundry list of opening bands that may or may hit hit the spot…..and Eaten By Sharks fucking shredded!” – Technical Music Review (Live Review – Eaten By Sharks Opening for First Fragment – St. Catharines, ON -12-2-18)

“They groove a ton, with some sweet guitar licks for good measure to keep your ears engaged. They’re a mix of classic and new death metal, and just as ferocious.” – Technical Music Review