For fans of Deftones, Stray From The Path, Korn, Limp Bizkit, Emmure

“We think Lonely Wreck is a great follow-up to our first single The Dogs. We have recurring themes throughout our songs, kind of like a set of ingredients that we use to cook our tracks with. Even though we’re a new band, people who’ve heard us before will definitely know it’s DV when they hear this new song. As for the music video, death is once again a big part of the imagery, but instead of us being murdered, this time we focused on an individual struggling with addiction and the depression that comes with it who, eventually, loses control of his life and contemplates suicide.” – Dead Velvet 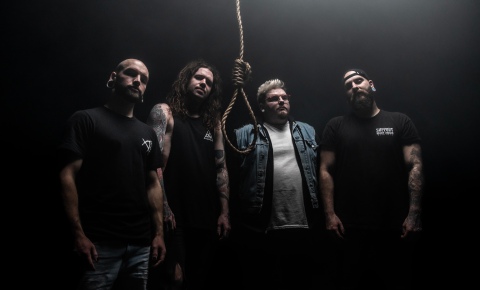 Based out of Montreal, Quebec, Dead Velvet is a metal band formed in 2021. Striving to serve up their own poetic blend of atmospheric chaos, dirty grooves and emotional turmoil, they are set out to provide provocative, intense, no bullshit performances. Pulling in influences from multiple genres including nu-metal, hardcore, hip-hop and everything in between, they are sure to make you move your feet. Their first single “The Dogs”, recorded with Maxime Lacroix of House Of Gain studios, was released in early 2022 and just a few months after, they are ready to present their second introductory single “Lonely Wreck”. With a multitude of other bone-crushing tunes in the works, Dead Velvet are making their way to a stage near you.

1. Originally, the band was called Gorilla Finger. I was playing the game Would You Rather on someone’s phone and the question was “Would you rather finger a gorilla or have a gorilla finger you?”, and I found the words “gorilla” and “finger” so phonetically pleasing together. It sounded really funky but after asking several people what they preferred between the two names, we eventually decided to go with Dead Velvet. I didn’t want to let the name Gorilla Finger go but Dead Velvet really grew on me. – Stretch – Guitar

2. In 2016 our drummer Tylor and bassist Corey were starting a band called “ Act On Impulse” and they actually hit me up to be their vocalist, I was definitely interested in the project and wanted to jam with them but I was already in two projects at the time, one being Junkowl in the early stages of its creation and because of my schedule I didn’t have the time. Fast forward 5 years and I saw Dead Velvet forming and saw a couple Instagram stories of them playing and honestly thought to myself “Damn I wish I was a part of this project” and then not long after  Tylor sent me a message saying they were looking for a vocalist, they sent me two tracks at like midnight and I was so stoked and inspired by the music that I wrote the lyrics for both of them that night and recorded vocals the next day in my kitchen. We jammed a couple days after that and it’s been nothing but good times ever since. – Jesse – Vocals

3. I came up with my own tuning that we use for all our songs. Different tunings inspire different riffs and I wanted to have a new approach when writing for this band. I also had to figure out a way to make all the weird guitar parts more playable. – Stretch – Guitar