“This is the kind of band that really plays that pure, raw, seething thrash metal that I love.” – Wings of Death

“The EP thunders around the listener’s ears with a massive, powerful sound and gripping guitar riffs, but is also arranged with great attention to detail. Geoff Waye also acts as lead guitarist in the melodic as well as brute playing with pinpoint accuracy… Thrash fans who expect more than just head banging should remember the name TRISKELYON.” – PowerMetal.de

“What does Melodic Thrash sound like? Well in the eyes (and ears) of Geoff Waye it sounds like Thrash with influences of Traditional Metal, so you have plenty of heavy chugging Thrash riffs, separated by Traditional Metal bridges and big choruses. Opening cut “Hunger” sounds like a classic Anthrax cut from the “Spreading The Disease” era, with Iron Maiden influences all over it and Pete Healey’s higher pitched vocals only enhancing that nostalgic feel.” – Metal Noise

Triskelyon is a Canadian melodic thrash metal project created by Geoff Waye, guitarist for Artach and Category VI. Conceived in late 2021 as a studio-only project, the first self-titled EP is set for release on January 25, 2022.

Triskelyon features the contributions of various vocalists. The vocalists and musicians that featured on the EP include vocalist Pete Healey and Marlee Ryley (Hyperia), along with drum programming by Raul Marques (Burning Torment).

The EP as a whole explained by Geoff Waye.

The music is straight to the point. No dicking around with breakdowns, no long drawn out solos, just get straight into it and let the headbanging commence. The EP’s tracks are therefore not long but get right into it. I tried to make the chorus more antithetic and memorable. Melodic solos. Speed. Etc.

1. Hunger: This EP opener is a statement. It starts with no buildup just straight into the fun speedy thrash riffage. This was also the first song I wrote for this project. After I had it written and got the drums done, I knew I was onto something. The song is about a hunger for change in the world. I am not a fan of the way the world is heading in terms of politics, divisions, and how stuck in their ways and traditions people are.  The chorus line “It’s the time for the fearless to rise. A hunger for change in their eyes.” gets to the theme and heart of the song’s idea.

2. Find A Way: This is the more melodic of the three and has a bit more groove. It’s about my life in a way with lyrics about feeling somewhat isolated from the pandemic….even tho the song itself is not at all about the pandemic. It’s just a song about feelings and finding my way through it all.

3. Odyssey (Blessed by Steel): This is the fastest and most intense song on the EP. It’s speedy and full-throttle thrash. The lyrics are again personal and about my musical life journey as told through using song references which an astute listener might pick up on a few of them.

1.  Triskelyon is a deliberate misspelling of the word “triskelion”. It is defined as follows: “A triskelion or triskeles is an ancient motif consisting of a triple spiral exhibiting rotational symmetry. … The actual triskeles symbol of three human legs is found especially in Greek antiquity, beginning in archaic pottery, and continued in the coinage of the classical period.”  It has different meanings, but the one that spoke to me is the concept of forwarding movement and not standing still….some of the ideas that found their way into the lyrics for “Find a Way”.

2. Pete and Geoff were in a Newfoundland based band together in the early 2000s called Oberon.

3. Triskelyon is a solo project yet the door is open to collaboration with others. 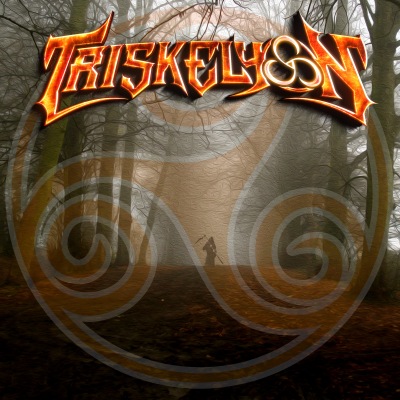