“The poetry of the lyrics is eloquent and frightening, providing a shattering portrayal of dismay and despair, yet in its bitterness, shaded with sarcasm, the words may also be understood as expressing a revelation of emptiness that is triumphant and empowering. Musically, the song is a stylistic hybrid that’s deeply haunting and even entrancing, but it too is a bitter revelation. The slow, ghostly wail of horns opens the song, along with solemn ecclesiastical chanting. Skull-cracking beats join in along with grim guitar emanations and torrid howls. The pace of the music remains steady, but the riffing transforms into a searing sensation. The tragic wail of the opening persists, and bell-like guitar tones ring out in grief around the scalding vocals and the boom and snap of the drums. A feeling of anguish burns through the music, but a sea of soft ambience flows in, along with a mysterious rippling melody. The music ascends and shines, but never casts off the feeling of tragedy or the aura of mystery.” (single – Cheirotonia) – No Clean Singing

“Idol Of Fear have released Trespasser, an album far too good to go unnoticed… End to end Trespasser has a magnificently bleak and darkly foreboding air throughout,” – Jools Green – Metal Talk

“The biggest surprise isn’t merely that Trespasser is great, but that it’s within striking distance of excellence. Despite its flaws, Trespasser is a highlight of 2022, and is the only album that’s torn me away from the new Sylvaine. While Trespasser isn’t rainbows and butterflies, it hooked me on my first listen, and left me even more enthralled and moved after dozens of spins. I like to think I’m a harsh enough reviewer, with an average score of 2.86 (including an unpublished dud). This review might endanger my employment indentured servitude with AMG LLC. But Trespasser is one of the greatest dark-horse records I’ve heard in years, and I have no regrets in awarding it my inaugural 4.0. If you’re one of Idol of Fear’s 118 Spotify listeners, I’m impressed. If not, get on board. 4/5” – Angry Metal Guy

“Eloquent, frightening, and tangibly real, it is the reflection of a lost, fearful mindset that longs for answers. Trespasser is a hostile Masterpiece. ” – Metal Roos

“This is the kind of album that puts a lot of effort into creating a unique atmosphere, a very sinister one at that, and while similarities to Emptiness are abound, this still feels extremely unique. And despite its emphasis on atmosphere, the staying power lies within the fact that they’ve managed to craft really memorable songs to pursue this atmosphere. Choruses and melodies never feel cheesy, but they stick out, ensuring a pretty good balance between immediate and lasting impact.” – Metal Storm

“Familiar with much of the Canadian metal scene, Idol of Fear stands out as a band offering variety and passion through their creative experimentation and discovery. Trespasser is sure to bring familiar listeners and new to their knees with terrifying vocals, chaotic melodies, and beautiful instrumentals that certainly made me raise my eyebrows in surprise.” – Noob Heavy

“I love the way that Idol Of Fear can create songs that are as majestic and beautiful as they are brutal, nasty, and uncomfortable. When these two forces combine, it’s only a matter of time before I succumb. Take a listen yourselves to see if you feel the same way. Highly recommended.” – Man of Much Metal

“in the spectrum of Black Metal Idol Of Fear sit in what has become known as the third wave, the avant-garde new wave that specialises in creating dark and oppressive atmospheres with brooding, menacing and sinister moments combining to create something almost cinematic.” – Metal Noise

“If you like this kind of Black-Doom-Ambient it’s definitely a must-listen record.” – RTMB Music

“Idol Of Fear expel a nice level of energy to create a blackened crafted set of songs…” – Brutalism (All Sights Affixed, Ablaze (LP))

“The first full length from Ontario quartet Idol of Fear kind of snuck under the radar at the end of last year, but better late than never – especially since this is one debut that will make you sit up and take notice… well-conceived and mindfully executed.” – Metal Rules (All Sights Affixed, Ablaze (LP))

“the song (All Sights Affixed, Ablaze) delivers is dark, dynamic music performed with a lot of impressive instrumental flair, a deft balance of memorable melody and scathing aggression, and the kind of vocals you can understand — at the same time as they are gnashing voraciously through flesh and bone.” – No Clean Singing

“For a first release, this is a very good album on which to build a lengthy and prosperous career. It will appeal to lots of people, and you will most likely love it if you enjoy experimental music. This is well worth checking out.” – Metal Temple (All Sights Affixed, Ablaze (LP))

“All Sights Affixed, Ablaze from Barrie’s Idol of Fear impresses right from the get-go with “Vanquish.” – Hellbound

“one listen of this track (All Sights Affixed, Ablaze) and you’ll find all sorts of influences and shifts in tone, but it’s all dark and weighty. ” – Yell Magazine

“Idol of Fear is one of the best surprises of 2014 in the realm of black metal.” – Metal Made In Canada(All Sights Affixed, Ablaze (LP))

“The music is consistently strong, heavy, and brutal, but it also has a melodic quality undergirding the whole thing, particularly in the guitars. Listen to the music and you’ll hear it, a melodic high end that tracks the heaviness, much like a bird of pretty circling its way closer and closer to its kill…Together, the band members have created some ambitious and edgy extreme metal. This is a solid debut from a band to watch!” – Sea of Tranquility(All Sights Affixed, Ablaze (LP))

“Using some kind of awesome power, Idol Of Fear manages to take all the doom and gloom of operatic Black Metal and combine it with the tonal complexity of Death Metal all in a fresh and new way that I haven’t heard before.” – Absolute Underground Mag (All Sights Affixed, Ablaze (LP))

“I don’t usually give away spoilers but this album has just an epic finish. Make this the last music you hear before heading outside on a dark, crisp night. You’ll feel the air differently.” Metal Storm (All Sights Affixed, Ablaze (LP))

”This is extreme experimental Metal Canadian style; it sits menacingly across the chasm between death and black reinforced by its own innovative edge.” – Metal Talk (All Sights Affixed, Ablaze (LP))

“the band creates an imposing and immersive soundscape of extreme metal which comes with a blackened heart and experimentally fuelled provocation. It is a fiercely challenging and rewarding confrontation as evidenced by the band’s debut album All Sights Affixed, Ablaze, eight individual torments which align for one grievous and pestilential seduction of ears and imagination.” – Ring Master Reviews

Track By Track Explained by the band:

The Flayed Horizon – A fast and ravenously violent song, tribal sounding beats with the most unhinged vocals on the album. The lyrics pertain to recurring dreams of utter pandaemonium.

Cheirotonia – Musically there is something tragic to this one while carrying an air of mystery. The lyrics are bitter and somewhat sarcastic, but also triumphant and empowering.

Phantom –   A mid-paced heavy hitter with riffs that crawl through the walls to stalk your soul. Featuring spiteful lyrics based upon cathartic retribution

Trespasser – The most dirge-like, spiritual song on the album. Features heavy organs and lyrics dealing with intrusion into forbidden realms

In the Cold Light of Dawn – A somewhat poppy song for us, utilizing more direct, catchy hooks and a straight-up structure

Endless – A somber melody offered as a resonating conclusion 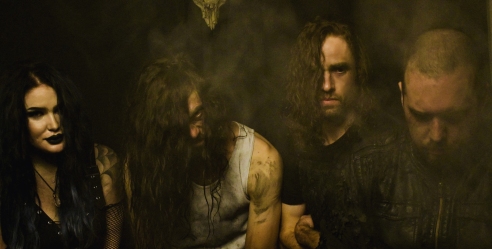 A heavy darkness from Canada who have been stalking the unlit horizon since 2011, Idol of Fear is undeniable, undefinable. Formed out of a necessity to make something out of the gloom that swirls around us all, Idol of Fear has been making music together for a very long time now and dedicated themselves to honing their craft, as it is work that they do not approach lightly.

Thus far, Idol of Fear have released two full-lengths, “All Sights Affixed, Ablaze” (2014) and “Grave Aperture” (2018). A third, “Trespasser” will come out in 2022. All contributing ideas to the creative process, Idol of Fear tracked the first two albums themselves and tend to write new material by recording as opposed to jamming it out. Every lyric relates to a personal experience, but oftentimes certain elements seem to make their way through dreams and other nebulous connection points.

When playing live, some songs are re-arranged in order to be properly executed, but for the most part Idol of Fear recreates the atmosphere that their recorded material projects – with the extra ferocity of course.