“This is by far some of the heaviest tunes we have written and the addition of Lead Guitarist Danio Pirrone and keyboardist Matt Williams has also created a new dimension to the My Hollow sound to make it so much more epic. The new tunes don’t stray too far from our back catalog, but they do possess more of a mature approach to our songwriting. At the end of the day, we hope that the listener can extract their own joy from each individual song. We think the older, as well as the newer fans, can find tangible qualities to enjoy about the new EP.” – My Hollow

For fans of Chimaira, Gojira, Lamb of God, August Burns Red, Fit For An Autopsy

“It has all the subtlety of two-ton anvil slamming down on a set of pearly whites! ” – Heavy Metal Time Machine

“Five pissed off Canadians ready to tear my head off! A welcome surprise.”- Power of Metal

“A staggeringly great job these boys are doing.”- Metal Talk

“I once read it was the test of the progressive band to take two wholly unrelated pieces of music and move seamlessly between them. My Hollow has that in spades, and diamonds, and clubs, and hearts.” – Glacially Musical

“On Borrowed Time is killer. True, it’s packed with a lot of influences, ranging from Pantera to Parkway Drive and more, but My Hollow still retain their own unique, bone-shaking, heavy sound. They’ve just been sure to include all of the best and dirtiest elements of heavy music.” – Skullnbones

“They are a dynamic band, jamming along at 100mph, then cruising along to vast, deep sonic vistas that refresh the listener throughout the album (after On Borrowed Time, Cold Dark Days slows it down). They bounce around from different influences and spheres, but never staying long enough to wear out their welcome.” – Hunter Young, Metal Machine

“Canada’s My Hollow really set the metal underground on fire with their debut full-length entitled “On Borrowed Time”. This CD encompasses most every element of death metal and death-metal/core into the mix and the end result is one of the best releases I have heard this year. Definitely in the top 10.” -Akerthorpe, Encyclopedia Metallum

The EP as a whole:

Lyrically, the album fits well together. Each song has its own struggle and perseverance. The main focus for each song was to have its own battle and its own victory. Each topic is different, each outcome is the same.

1. Vultures
When I wrote this song I wanted to write something brutally heavy and I had this kind of black metal fast tremolo guitar riff that just totally crushed. I wrote a couple of alternate parts that were cool, but didn’t have the feeling that I was going for. I would say that this song was probably one of the most difficult ones for me as I had to revisit it a couple of times. I am definitely happy with the finished product which made all the struggle worthwhile. (Greg – Guitar)

2. Fighting The Monsters:
This song came together like peas and carrots. I wanted to write a single that had huge sounding choruses and fast, hard hitting verses. We wanted some singing parts in the chorus and we were fortunate enough to have Bjorn of Soilwork completely kill it on this song. I was definitely aiming for a sound that a bigger variety of crowd may latch on to. (Greg – Guitar)

3. Hell Or High Water:
When I wrote the guitar parts for this song they ended up coming together really quickly. I remember feeling some stress and some loneliness at the time and I think that it comes through in the music. It’s also a lot different structurally than most of our songs, which is something that I always try to bring to the table. It also features a longer instrumental section nearing the end which also has gotten positive feedback from the crowd during live performances. Danio Pirrone added a pretty sweet guitar solo in place of the one originally written as a place holder, which is far more technical than My Hollow leads of old. The vocals that Graham added feed into the feel of the music as well, that feeling of unrest and longing for closure are evident in the lyrics. (Sean – Bass)

4. Faded Through:
This was one of the first songs I wrote coming off the release of the “And Now We Fall” single. I wanted to keep the same feel and evolve from that sound which was heavy on the keyboards. I had some basic ideas for the keys and when Matt got a hold of the song, he took it to the next level. The song really came together when we started jamming it out. I had a hard time coming up with an ending and Sean had this killer break down the fit perfectly which in turn allows us to do our trademark move, “The Slowbang,” when we play it live. If you’ve ever seen us play Cold Dark Days live, you’ll know what I’m talking about. (Greg – Guitar)

5. The Iron Harvest:
For me, this song was all about the ending. I actually wrote the song backwards in a sense. I had this killer idea for an ending of a song and what better way to start the song than to completely blast the fuck out of our forearms with a shit ton of tremolo picking. We jammed this song out for a while and with some solid ideas from the boys, this beast of a song was born. (Greg – Guitar)

This was my least favourite song, in truth, prior to Matt getting involved. The ending was awesome, but I wasn’t a fan of the beginning sequence until Matt added his parts in, which for me really improved the tune dramatically. He brought some outside-the-box ideas to parts I felt needed something extra and morphed it into one of my favourites tracks from this release. Danio Pirrone came into the studio and ripped a few lead parts on top of this tune that we could only dream of playing in a My Hollow song prior, this is only a small feature of what he is capable of, so it’s a taste of what’s to come from future My Hollow songs. (Sean – Bass) 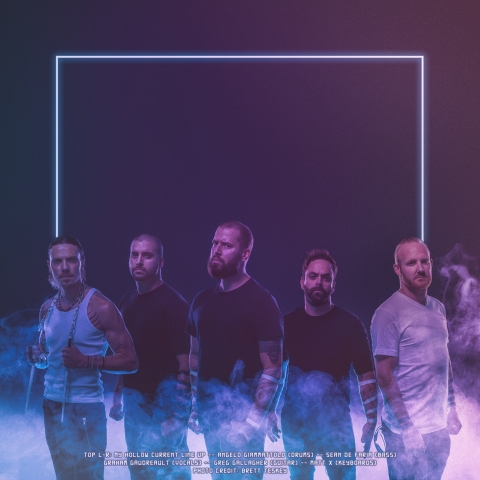 hollow: (1) a place or area that is lower than the area around it.
(2) an empty space inside of something.

The definitions of the word hollow describe My Hollow fittingly. With intense riffs and passages seamlessly giving way to lower, heavier parts in a lock-up, chunked out style with mutes leaving empty space in an otherwise chaotic sequence.

Based out of the Toronto area, My Hollow boasts a cast of independent metal journeymen, hungry to be heavier, tighter and more engaging with every song. Applying advice and drawing experience from performing alongside some of Canada’s biggest metal exports; The Agonist, Cryptopsy, Threat Signal,  Beneath The Massacre among others. My Hollow as a whole can draw from a multitude of influences, not only from metal but from other genres as well, reflected in both their recorded releases as well as their live performance. Described by Danish webzine Power Of Metal as “five pissed off Canadians ready to tear my head off!” As well as “all the subtlety of a two-ton anvil slamming down on a set of pearly whites” by US based heavy metal blog, Heavy Metal Time Machine.

My Hollow has two official releases, 2012’s ‘Cold Dark Days EP’ featuring four demo versions of songs which were reworked and reimagined on 2014’s ‘On Borrowed Time’ full length release featuring My Hollow’s most refined and focused work to date.

Like any band, My Hollow has had its highs and lows. Being selected as a finalist for the annual Wacken Metal Battle Canada 2013 solidified My Hollow as one of Toronto’s, as well as Canada’s top metal acts and announced themselves to a broader spectrum of listeners. Although narrowly missing out on a spot to perform in Germany at heavy metal’s premier festival the experience proved to strengthen the bands resolve and galvanize their confidence in the process.

While the band’s recorded releases give the listener an idea of what My Hollow is about, the live performance is where My Hollow truly shine. “With a crushing wave of energy, and sound, My Hollow filled the venue with their effervescent presence. The lads never disappoint on stage,” is how Toronto based metal publication Metal Master Kingdom described their experience.

With a new EP “Fighting The Monsters”, which includes guest vocals from Bjorn Strid (Soilwork) due out in 2022 and an ever-evolving sound and live performance, My Hollow strive to become an ever-present staple in the Canadian and global metal scene and will stop at nothing to leave you hollow, and wanting more.

1. The guitar and vocal tracking for the album were engineered by both Greg Gallagher and Sean De Faria. The drums were recorded by Tyler Williams at Monolithic Productions, who also mixed and mastered the album. Every band is on a budget, the more money you can save doing things yourself the better, so long as the end product is acceptable. That money can be used for other ventures like promotion, music videos and merchandise.

2. All artwork from the last 10 years has been done by Jennifer White, the wife of our vocalist, Graham. She has made so many amazing pieces over the years and has really made us look good visually. She also created the storyboard for the music video for ‘Vultures,’ as well as creating all of the puppets, props and backgrounds by hand, all while serving as de facto director for the video. We are very fortunate to have her around, My Hollow wouldn’t have been the same without her.

3. We have a number of “Easter Eggs” and hidden inside jokes without our content. A lot revolve around Angelo’s obsession with the number ’11.’ For instance, whenever we can we change the double-L’s in My Hollow to My Ho11ow, or whenever we have a music video we’ll have things in the background, like in the music video for “On Borrowed Time,” the clock is set to 11:11. Also, on one of our recordings, Graham said ‘Meow’ instead of ‘Now,’ in homage to the cult movie classic “Super Toppers.”