“I think we’ve created a truly original album with Fire It Up. It was a blast writing these songs and putting my personality into the lyrics for the first time. We’re proud to have done all of the tracking ourselves (it was a learning experience!) and to have done things the old-school way without any quantized drums or pitch correction. I think the result is a more natural-sounding recording, which gives a better human connection and allows the songs to shine through with the real attitude. The songs on the album are meant to inspire a life journey – an adventure with friends, motorcycles, romance, danger, and victory. I hope it will be a soundtrack for your adventures.” – JJ Tartaglia – Thunderor

1. JJ Tartaglia is indeed an avid motorcycle rider and has been featured a couple of times in Adventure Bike Rider.

2. The band did actual motorcycle riding and yacht sailing to shoot their music videos.

3. Several keyboards were used in the production of the album, including 2 different keytars, and also a 40” gong.

4. JJ and Jonny have toured all over the world as members of Skull Fist.

The album as a whole:

1. Fire It Up: Up-tempo track with 2 different choruses, massive hooks and melody. The lyrics are about motorcycle riding, romance, and escape.

2. How We Roll: Groovy, catchy song, reminiscent of Twisted Sister, Slade. The lyrics are about motorcycle riding, friends, and not wanting to go home.

3. All or Nothing: Fast tune, lots of double kick, ripping guitar solos, super catchy chorus. The lyrics are about motorcycle riding through a portal and metaphorically moving onwards in life.

5. Thunderor: Up-beat fun heavy metal song similar to the style of Skull Fist, some Pennywise influence, harmonized guitar solos and mini drum solo. The lyrics are about pulling up on a motorcycle and other guy’s girlfriends wanting you.

6. On the Run: Driving mid-tempo song, reminiscent of 80s Ozzy Osbourne. The lyrics are about being on a mission, romance, danger, and double cross.

7. Into the Storm: Guitar & synth instrumental, reminiscent of Yngwie Malmsteem.

8. Cold Tears: First half starts with a vocal & piano ballad, which progresses into a Manowar-esque epic with an over the top ending. The lyrics are about reflection on life, not giving up, and comradery. 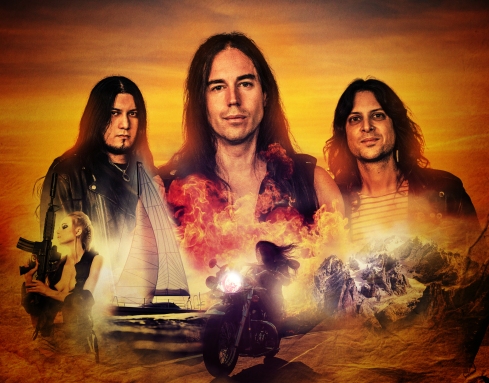 THUNDEROR is an 80’s-infused heavy metal band formed in 2020. Featuring a lead-singing drummer and an all-star lineup, the Canadian power trio delivers hook-driven stadium caliber songs with an untamed spirit.

Since 2019, drummer JJ Tartaglia had felt a calling, one which grew stronger each day. Being a member of several prominent metal bands over the last decade (most notably Skull Fist) and having essentially served as a disciple of heavy metal for many years, the time had come to take his quest even further. A new course was being charted for his musical mission. He would share a vision, a feeling… a message he could deliver only with his own voice.

Fueled by his passion for adventure, JJ began to work on drum arrangements and piano pieces that would become the skeletons of the Thunderor songs.

In 2020, with the addition of ex-Skull Fist bandmate Jonny Nesta on guitars, combined with JJ also composing on keys and vocals, songwriting began in full force and quickly yielded an album’s worth of material. Close friend and monster player Oscar Rangel (ex-Annihilator) was then called upon to do bass and the line-up was complete.  Thunderous drums, lightning hot guitar licks, dreamy synths, and piercing vocals would form the musical storm that is THUNDEROR.

The band would spend the next year self-recording the album, priding themselves on recording the natural way, producing an energetic record with a strong human connection.  Fall of 2021 would see the release of the 1st single HOW WE ROLL, immediately garnering a worldwide audience. The debut album FIRE IT UP is set for an early 2022 release backed by an European tour.

If you’ve ever felt a longing for escape, a thirst for adventure, wrapped in romance and danger, well what are you waiting for? Get after it and let THUNDEROR be your soundtrack!