“This is our first time doing a proper re-release – the original version of Kingsbane didn’t get out to that many people. We love the songs and the story behind it, so we thought we’d freshen up the sound a bit, and give a few new takes on some of the songs so there’s a new experience for people who have heard the album before.” – Osyron

“Their excellent blend of melody, speed and power always hits the sweet spot and I always enjoy seeing them. Progressive Power Metal at its finest. I could see them playing in Atlanta on PowerProg one year soon!” – Metal Rules (Live Review)

“Everything about KINGSBANE is supremely well done. They are one of my new favourite Canadian bands!” – Metal Rules (2017 Kingsbane album review)

“a stunning demonstration of metal majesty. I love theme oriented records because of the presence of narrative that directly shapes the tone and direction of the work… Without any doubts I can tell you that everyone in this band poured every bit of their heart and soul into this album.” – The Gauntlet (2017 Kingsbane album review)

“Prepare to enter the sonic equivalent of Valhalla, where glory is won with axes in hand; axes bearing six strings that pour forth thundering metal into the moody skies of some long forgotten time.  ” – Beatroute (2017 Kingsbane album review)

“Everything about this band is top quality and one of the most proficient, mature, classy and yet still exciting new bands in this field.” – Metal Rules (Foundations 2020)

“Get close, get warm and listen to the tales told of Canada by Osyron. 8/10” – Games, Brrraaains & A Head-Banging Life (Foundations 2020)

“a very solid entry into one of my favorite genres and I think it will fit right in many people’s playlists – and, more importantly, I think the playlist would be lacking without it. This one is worth picking up. I don’t think you will regret it at all.” – Uber Rock (Foundations 2020)

“From acoustic to symphonic, each song has plenty of twists and turns with potent vocals and compelling arrangements that showcase Osyron’s instrumental prowess.” – Heavy Music Headquarters (Foundations 2020)

“Foundations is an impressive, very likeable album that will no doubt strongly appeal to a diverse range of metalheads, from fans of European power metal, to prog metallers, to fans of more modern metal. Given the strong quality of this EP, I very much look forward to their next full-length album, which could really establish Osyron as a new, fresh force in the international metal scene.” – Metal Observer (Foundations 2020)

“Foundations puts the band front and center for another Canadian breakthrough to a worldwide audience. Osyron succeed in creating a musically catchy effort that also contains some interesting twists and killer interplay when necessary – and should be a band to keep tabs on.” – Dead Rhetoric (Foundations 2020)

“There is something deeply passionate about “Foundations”, and I am impressed by what these skilled Canadians have spawned. It will be interesting to see what the future holds for Osyron, and regardless of whether you dig Symphony X or Pain of Salvation, I suggest that you check this 29-minute gem out.” – Eternal Terror (Foundations 2020)

“Seriously, it had been a long time since I had been blown away by a progressive metal release and this one does not disappoint. The production is on point and every song has its place on this EP to demonstrate what these guys are capable of. If you are looking for something different and fresh in a genre that has been known to stagnate, give this EP a nice long listen.” – Metal Temple (Foundations 2020)

“Foundations is genuinely unlike anything I’ve heard before and it’s had me going back for multiple listens precisely for this reason. The musicianship and songwriting are of high quality, but it’s the production that really sells it.” – Moshville (Foundations 2020)

“Osyron has definitely grown since I first got the chance to hear their music. They have matured in just about all factors that influence their music in any way: Skill, composition, production, anything you can think of. There really is no weakness to be found, they have delivered an awesome album with versatility and power as its greatest selling points.” – Dutch Metal Maniac (Foundations 2020) 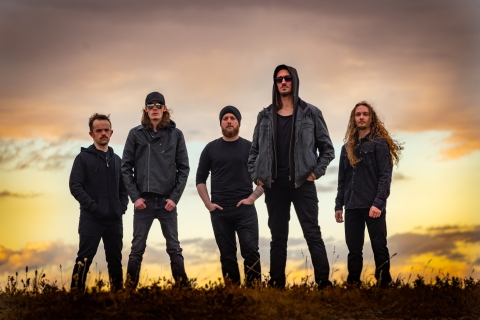 Osyron is a symphonic metal band based in Calgary, Alberta. The group consists of vocalist Reed Alton, guitarists Krzysztof Stalmach and Bobby Harley, bassist Tyler Corbett, and drummer Cody Anstey. Bridging the gap between traditional European metal and the music of their homegrown contemporaries, Osyron has a sound all their own.

The band’s origins can be traced back to Ontario, where they began under the name Morbid Theory. After releasing two demos (Chaos Breed in 2006 and Harbinger in 2010), the band underwent some changes in membership, scenery, and identity. Moving to Alberta in 2012, the group, now rechristened Osyron, re-recorded Harbinger in Calgary, and released the album in 2013.

After releasing their sophomore album, Kingsbane, in the fall of 2017, the momentum that followed was swift. Kingsbane caught the attention of the European metal community – proving a favourite of audiences, critics, and radio programmers.

In 2018, Osyron released a metal cover of the Canadian national anthem, which picked up speed across the country. This patriotic theme was continued into their third release, Foundations (2020). Stemming from a perspective of Canadian identity and culture, both past and present, Foundations challenged the global perspective of the great white north by retelling historical moments in an immersive and melodic manner. Speaking on topics of Canada’s colonization to the mistreatment and recognition of Aboriginal heroes to the country’s participation in global warfare.

Now in 2021, with great reception from new fans for “Foundations”, Osyron has decided to re-introduce the past to the present with the re-release of their 2017 album “Kingsbane” in a Deluxe Edition on May 14th.

The Deluxe Edition of “Kingsbane” will feature all original tracks from the 2017 record re-mixed and re-mastered (which featured former drummer Trevor Cobb). There will also be three re-written and re-arranged bonus tracks for Viper Queen, Griefmaker, and Razor’s Wind (Acoustic) with current drummer Cody Anstey. The original recordings of the bonus tracks were written by guitarists Krzysztof Stalmach and Bobby Harley, but for the Deluxe Edition were collaborated by the whole band. The Deluxe Edition of “Kingsbane” was also entirely re-mixed by bassist Tyler Corbett and re-mastered by drummer Cody Anstey.

Osyron has performed alongside numerous major acts such as Norther, Protest The Hero, Into Eternity, Threat Signal, and The Agonist. Their next goal is to take their sound across the Atlantic to put on a true Canadian spectacle across the European lands.

Shared Stage with:
Norther, Protest The Hero, Into Eternity, Threat Signal, and The Agonist

1. Out of the five members of Osyron, four of them have diverse backgrounds in the technical aspects of music production from record engineering, to production and mixing, to graphic design and website design. Much of our ‘behind the scenes’ activities are handled completely in-house. Almost all of our music is recorded by Tyler Corbett and Cody Anstey, who each have a foothold in the local audio engineering community. Krzyzstof Stalmach writes and composes symphonic music scores from his home studio, and handles all of our backing instrumentation on the records and at our live shows. Bobby Harley handles almost all of our web presence, building and maintaining the official website and social media.

2. Osyron had a great opportunity in 2017 to open up for Western Canadian heavy metal giants Into Eternity in Edmonton, AB. It was our first time performing outside of our home city with a completely new lineup. Not knowing what to expect, and with only a small draw of die-hard fans, friends and a few family members, we had no idea what was in store that night. There was a line up out the door, and the venue was over capacity so they had to turn away people at the door (including some friends and family of the band). With adrenaline coursing through our veins, and a full energized crowd, we played a quick 30-minute set to mosh pits, heavy headbangers and new fans. The experience was a foreshadow of what the new lineup was capable of with not only our new music, but the chemistry that was being forged on stage that night.

3. Guitarists Bobby and Krzysztof have played games like Call of Duty and World of Warcraft with members from In Flames. Because of this relationship, they’ve also been able to hang out with them backstage multiple times, as well as the opportunity to meet members from other bands such as Behemoth, Machine Head, As I Lay Dying, and Killswitch Engage.

4. We produced and uploaded our own metal version of O Canada on YouTube in 2018, and have received word that the song has been played in multiple schools throughout the country, been used on Canadian podcasts, etc.