For fans of Soilwork, As I Lay Dying, Scar Symmetry, Lamb of God, Unearth

“Beneath This Crown is in our opinion the most innovative and modern record we ever made. The creative process for each track has been very meticulous and nothing has been left to chances. It blends the melodic and experimental part of Reality Grey with the most brutal and aggressive side of the band.” – Reality Grey

“Melodic, aggressive and catchy, this track adds (Multidimensional Hollow) well placed synths and ambiance to an already well rounded sound, making it complex without being overcomplicated. The new album shows a marked evolution in the band’s sound, something that will intrigue current fans and entice new ones.” – Metal Injection

“Beneath this Crown, a creative step forward in their combination of NWOAHM from the early aughts, At the Gates-inspired metalcore and Scandinavian-flavoured melodic death metal.” – Decibel Magazine

“Reality Grey give off a viciousness and expertise hard to find in other bands. The instrumental expertise of each component is absolute, slighting touching tech-death side of acts like The Faceless but remaining ‘catchy’ in their complexity” – Metal Hammer

“It’s complete and total aural devastation with some seriously chunky moments, so it lives right up to what you’d expect a song called “The Void” to do.” – Metal Injection

“Reality Grey will serve the world of metal excellently both as an all round, no nonsense, metal act and as a brigde band for younger fans of heavy music” – Metalunderground.at 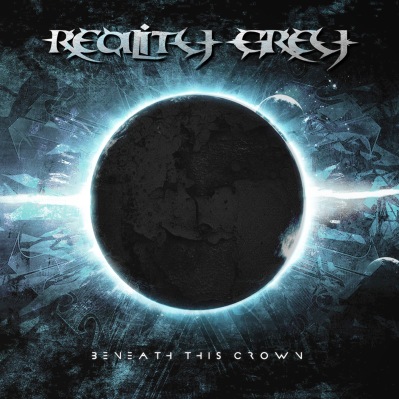 Track by Track Explained:
1 – Legion: An orchestral intro with some Orwellian-like speech
2 – Fade In Fear: Fast, razorsharp riffs with a melodic chorus and light-speed guitar solos. Groovy.
3 – Kings Of Nothing: A groovy and brutal intro with crazy riffs, gives way to a “spacey” interlude with a fusion guitar solo.
4 – Preachers Of Hatred: The most brutal song of the album. Slayerish intro gives way to a groovy and jazzy pre-chorus. Insane drumming and a very heavy finale.
5 – Daybreakers: Progressive riffing in the intro, the double bass goes in unison with the guitars, vocals a-la Meshuggah, super spacey chorus with clean vocals. A nice progressive bridge takes the song to a very melodic fusion guitar solo.
6 – Powerblast: Very groovy song, guitars and drums are a monolithic wall of sound. Evil riffs in the final part. Brutal.
7 – Multidimensional Hollow: The most progressive song on the album. Very melodic and complex with light fast guitar solos and an epic finale.
8 – The Fury: Groovy and fast. It starts with a riff a la Breaking Benjamin that results in a old school hardcore chorus.
9 – Dreaming (Feat. Milly Florio of End Of Skyline): Intro Pantera style, the verse, and the chorus are completed with the amazing voice of Milly Florio from the band End Of Skyline that perfectly matches the brutality of Tommy’s voice. The dreamy final part will urge you to listen to the song again. A very experimental tune.
10 – Reascent: Progressive riffing in the intro gives way to an HC verse and chorus. Very evil bridge before the guitar solo.
11 – Beneath This Crown: The title track has different feels, super thrashy at the beginning, doomy special and crazy guitar solos.
12 – Indelible Stains: Super heavy intro guitars and drums makes a wall of sound. The lyrics on the song are some of our favourite ever.
13 – The Void: This song has a metalcore feel, clean vocals chorus and huge breakdowns. 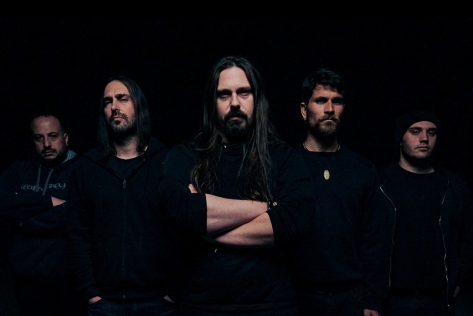 With the release of the debut full-length album “Darkest Days Are Yet To Come” in 2006, in the heat of the melodic death metal revolution, Reality Grey managed to secure their first record deal with Razar Ice Records USA. Songs like “Reality Grey” and “Never again” racked up hundreds of thousands plays on the old MySpace allowing the band to tour, gaining popularity well beyond the Italian borders. Following up with EP “Day Zero”, Reality Grey began to push their own boundaries. Ferocious, yet melodic, with a no-holds-barred songwriting attitude. Songs like “Day Zero” and “Slavery” emerged the band’s experimental side, synths, melancholic pianos, and acoustic guitars; perfectly fused with intoxicating sonic aggression.

After years of non-stop touring alongside bands like Deicide, Unearth, Municipal Waste, Sadist, Malevolent Creation, and more, the critically acclaimed “Define Redemption” is released by Bakerteam/Scarlet Records; sending the band on their first headline tour in Japan. Reality Grey, now having been featured on worldwide publications Metal Injection, Metal Hammer UK, Metal Temple, and Metal.de, released 2018’s “The Void”. Reviewed as “a complete and total aural devastation…” that “will blow your speaker out” by Metal Injection.

Reality Grey has completed work on their upcoming full-length due out May 7th 2021 (Blood Blast Distribution powered by Nuclear Blast). Looking ahead with tours and festival appearances on their sights, Reality Grey will continue to push ambitiously, earning their place among the pantheon of heavy music.

Now, having inked a worldwide deal with Extreme Management Group (EMG), the band says “We’re thrilled to announce that we have started working with Extreme Management Group! Definitely the right place for us. Big news is coming very soon. Stay tuned!” EMG said, “We are excited to be working with Reality Grey. They have some really fantastic music. We expect big things to come from this partnership.”.