For fans of Every Time I Die, Norma Jean, The Chariot, Chelsea Grin, Whitechapel, Traitors

“We’re just four homies from a small town that play groovy riffs, and crushing breakdowns. Come show us what you’ve got in the pit.” – Cavedweller 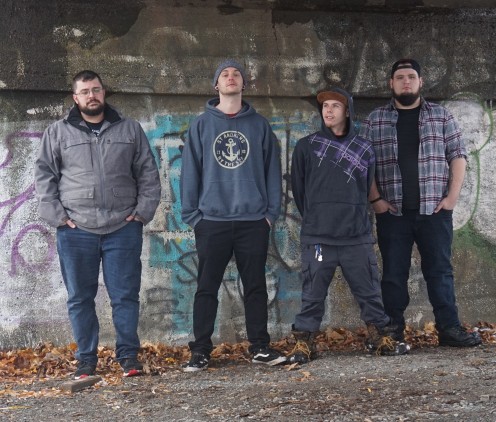 Cavedweller is four homies from the small town of Fredericton, New Brunswick, Canada that play groovy riffs, and crushing breakdowns.

Cavedweller is Cujo Bonvie (vocals), Alex Sturgeon (bass), Sam Brown (drums), and Brad Kenny (guitar), four guys who have known each other from the local scene for years. Brown and Sturgeon used to play together in local act Blueprints, and Bonvie was a regular attendee to local shows, and played in a number of local bands, including Dumpster Mummy, Panda Bee Catastrophe, and The Mind Unleashed. Once the four of them started jamming, the chemistry was evident and the rest is history.

In 2019, the band recorded their demo “Free-Sushi” which was followed up in 2020 with the EP “Primal”. The EP was mixed and mastered themselves; guitars were recorded in Sturges room, drums at a friend’s place, and mastered at Kenny’s place. During the recording process at Sturges, a lightsaber battle broke out between Sturge and Kenny to determine whose masters would be the ones released. It was a long and intense battle, but Kenny was ultimately the victor.

There is a wide range of influences coursing through the blood of the band including hardcore, punk, deathcore, and a little bit of prog-metal, and the final result is best suited for fans of Chelsea Grin, Whitechapel, and Traitors.

Cavedweller has played with several bands in their short history and expects to have a full length out by the end of 2021.

Don’t be shy, come show us what you’ve got in the pit!