“This EP sorta sums up what we’re about at this particular moment. Genre people might not be satisfied with our lack of adherence to any one sound for too long but we didn’t make these songs for those sorts of people. This might not be metal enough or noise rock enough or sludge enough or whatever, but we’re the kinda guys who get bored real fast, so there’s some channel surfing going on here. That said, we wrapped up all these ideas with burlap and tied it with razor wire. Hopefully, fans of ugly music will appreciate what we’ve done here as an introduction to the band and anticipate whatever else is coming down the pipe from us. We worked pretty hard to make sure this met our personal standards… and we’re really jazzed about how it all turned out thanks to the talents of our friends in the audio dept. This EP sounds crazy.” – Cell Press

“You know that feeling, when you spin a new record for the first time and it just fucking destroys you? Well today I am happy to report, Cell Press outta Montreal have truly delivered the goods with their debut self titled EP.  I mean fuck, is it any wonder this band rules, when they can boast members from the likes of The Great Sabatini, Biipiigwan, I Hate Sally, Architect. With their self-titled release, Cell Press give zero fucks about accessibility, instead they focus on delivering punishing aggression with a melting pot of sludge metal, noise rock, and grindcore.” – The Sludgelord

“a perfect showcase of their unique sound and style and leaves you wanting to hear more from the band. Their total disregard for the limitations of genres and boundaries results in the EP blending noise, grindcore, sludge, punk, groove and dark ambient among other influences. They perfectly blend raw aggression with groove and melody and aren’t afraid to shift gears to play with ambience and noise.” – Cave Dweller Music

“Warm fuzzy guitar tones bring a touch of the Sabbath to “Piss Police” with broken chords and momentary pauses giving the kind of sound that Raging Speedhorn look for to accompany the rampant venting screams of the vocals that unapologetically roar along during the montage.” – Metal Noise

“Cell Press’s debut self titled EP is definitely an interesting listen. I didn’t expect it to take me on the journey which it did. An aggressive sound runs throughout showing that this band don’t play by the rules, they’re making music the way they want to.” – The Independent Voice

“Noisy and enjoyable, I give this Cell Press effort high marks. I am a Punk fan from the beginning, and I hear those roots here, certainly in the attitude, even if the category is technically off. The disenfranchisement is very appealing. Recommended.” – Flying Fiddle Sticks

“Each of the five songs stands for itself, and as nightmarish they are, it is a lot of fun listening to them. There are two tracks on the EP that need special mentioning. First, there is ‘Desert Breath’ which the band called an inverted ‘Immigrant Song’ and features a line from Woodie Guthrie at the end. And then there is the eleven-minute long track ‘My Son will No [sic] the Truth’ at the very end of the tape. This one is the result of drummer Mark playing a long-ass solo while being stoned. The other band members added layer by layer to this recording, and while doing that they only listened to the layer previously recorded. The result is a weirdly awesome jam… Cell Press’ debut is a noisy, sludgy work of nihilism and musicked claustrophobia. This release is punk as fuck.” – MangoWave

1. “My Son Will No The Truth” began with drummer Mark getting suuuuuper high at the end of the first night of tracking and ripping an 11-minute solo. The next day the band added layers with a kind of rule in play: whoever was tracking could ONLY listen to whatever was tracked last. So each layer was a sort of reaction to the prior layer only. The studio is located next to some train tracks… the train sound at the beginning was captured serendipitously at some point during the 2nd day.

3. There’s one very small guitar riff that occurs in “Blacked Out In Verdun” that guitarist Sean initially played as a joke. It never failed to crack up the band so they kept it. It only happens one time… They wonder if anyone else could pick it out. 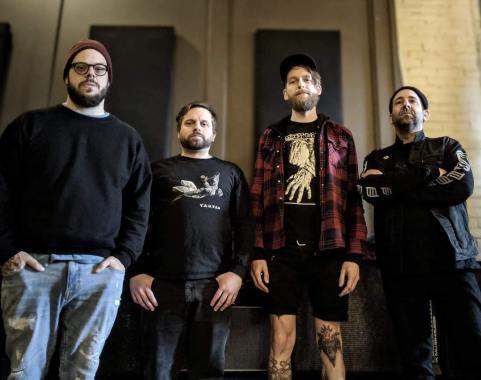 Cell Press are a Montreal-based band that formed in 2019. They play a sort of burly noise-rock that leans more on the hardcore and metal side of the swamp. They took their name from the 2001 Russian prison documentary “The Mark Of Cain”. The brutal humanity of that film is reflected in the music… on the surface, it’s raw and punishing but there are complexities and nuances revealed once the surface noise has been embraced. Members have played in a myriad of punk, metal, and hardcore bands such as The Great Sabatini, Biipiigwan, I Hate Sally, The Chariot, Animal Ethics, Architect, Swarm Of Spheres, and Angles. Their self-titled EP is the first offering of tunes. Recorded pre-quarantine in Hamilton at Boxcar Sound Recording

(Sean Pearson), mixed in Oakland at Anti-sleep studios by Scott Evans with the pandemic in full swing… 2 local shows have been logged but any further plans to gig have been halted by Covid-19.

The EP as a whole explained by the band:
We are not really trying to find “The Formula”. That’s boring to us. We all have plenty of ideas that we want to explore, and it just so happens that this combination of people is going to communicate those ideas in a very aggressive fashion. Some of it isn’t even really musical at all (“My Son Will No The Truth”). But this EP has bundled together 5 pieces that each stands on their own and don’t sound like each other.

Track by track explained by the band:
1 – Piss Police – We bookended this track with one riff which we play in different ways, as an intro and outro. The middle section was something guitarist Sean Arsenian had demoed at home for a different project. It found a better home with Cell Press. The bridge is a much noisier take on a Jesus Lizard type of riff.

2 – Desert Breath – This is sort of an inverted “Immigrant Song” type of riff, on steroids. The Refrain at the end is hijacked from a Woody Guthrie song.

3 – Blacked Out In Verdun – This song is sort of like a mish-mash of helmet and Keelhaul. The main riff has this elastic tempo thing towards the end of its phrasing that can be hard to achieve together, but its the most rewarding aspect of the song to guitarist Sean Arsenian.

4. Dead At OACI – This was the first song the band wrote together.

5. My Son Will No The Truth – Some folks don’t appreciate the “Filler” type of noise piece that some bands will have, but this track is as important to them as any of the other. They’ll never play it live (impossible to replicate), but they think it’s a really cool piece.