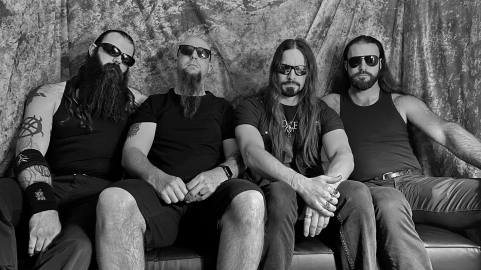 Canada’s Sadistic Embodiment is releasing a new album “Blood Spell” on September 18th via CDN Records. The album follows the band three EPs Beloved Imprisonment (2019), Blodörn (2018), and Self-Titled (2018). Continuing their sonic onslaught, each of the nine songs on “Blood Spell” has a distinct feel given the variation in vocal and instrumental styles throughout the album. Each song stands out and yet they are all uniquely Sadistic Embodiment. This will please old school death metallers and the new school with a variety of punch-in-your-face hooks, melodic passages, and absolutely brutal anthemic choruses.

“After spitting out three EPs this last couple of years, we were really stoked and kind of nervous settling into a longer writing and recording process for Blood Spell. As per usual, we cranked out the material during bi-monthly jams, but this time we really took our time crafting the music once the main structure of the songs was built. Our sound is still exactly the same, but the listeners may hear more broad musical influences across the nine tracks.  There are tracks that sound distinctively Wally and Jason and certain tracks where you really hear Bryan shine as he shows off his technical prowess.

A lot of our songs are longer than your average death metal track, and they are relatively simple in regards to guitar and lyrical work. But with longer playtimes, we were able to fit in more ambiance and guitars solos into every nook and cranny.” the band adds.

Today, Sadistic Embodiment is sharing their second single off the full length. Entitled “Gallows Hill”, the track is a thrashy and high-energy mosher with lyrics reminiscing of a brutal and unforgiving historic time.

“With this song, I went back to my roots, as many may know (and some that don’t) I’m from Ireland. I love to show my love for my country in my music, the first being a huge lyric influence in the song “Freedom Cry” from our EP “Blodörn”.

With “Gallows Hill” I once again go back to my homeland with more brutal Irish historical facts from the 1800s. The song is based on the area where hangings happened for horrific crimes committed, where a crowd would form to watch the pain and suffering of the man OR woman of the rope.

This is also my first song for SE where I take lead on vocals with our current vocal lineup. You can feel the pain of both those being hung and their victims’ families in this song, along with catchy groovy riffs and vocal melodies, this will be a song that will stick in your head for a while.”

Listen to “Gallows Hill” via its premiere on MetalInsider HERE.

“Blood Spell” will be released on September 18, 2020 on all major digital platforms along with being available for pre-order (CD) from CDN Records here.

The album is for fans of both old school death metal and newer that will appreciate it. Especially fans of Gojira, Bloodbath, and Kataklysm. Like a pungent black onion, “Blood Spell” has many layers of groovy, mid-tempo riffs, choruses alongside pain, anguish, and rage; the instrumental and vocal nuances meticulously build into each song. 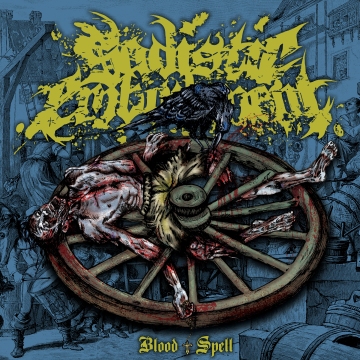 The sadistic death metal quartet was originally conceived in Edmonton, Alberta. Although all Edmonton born half of the group now resides in Calgary, travelling frequently to join the others in crafting extreme musical works. Each member brings their own distinct flair to the music, live theatrics, and social media content.

Drummer Bryan Newbury (also known from Into Eternity, Untimely Demise) formed the project in the fall of 2017 by inviting Curtis Vieville and Helge Lipphardt to jam simple and catchy death metal. A couple of months later, Jason Cullen joined the group and then Nate Mandrusiak joined shortly thereafter, forming the five-piece that produced their Self-Titled (March 30th, 2018) and Blodørn (September 8th, 2018) EPs. Curtis Vieville left to travel for the summer of 2018, leaving the band to record bass and vocals for the Blodørn release on his behalf.

During the late fall of 2018, the group parted ways with Helge Lipphardt and brought on Curtis’ old bandmate Wally Fischer. Continuing their relentless musical onslaught the group wrote and released the EP Beloved Imprisonment on January 31st, 2019, showcasing their evolved sound. But the work was far from over and after a few gigs, the group began work constructing their first full-length album. During that period the band parted ways with their singer Nate in early 2020, and from thereafter the group became a three-pronged vocal assault team.

Completing their work in the spring of 2020, the milestone album “Blood Spell” was finally realized. As if sensing the impending debut, CDN Records approached the band with a record deal just as the final touches were being completed. And thus Sadistic Embodiment joined the CDN Records family.

Each release from Sadistic Embodiment grows in depth and complexity while maintaining simple and heavy death metal passages. They pride themselves on having catchy choruses intermixed with powerful and epic melodies. The newest material exhibits dark soundscapes with a lot of variation in song type and feel. Listen closely and you will find evil and pain lurking in the mix