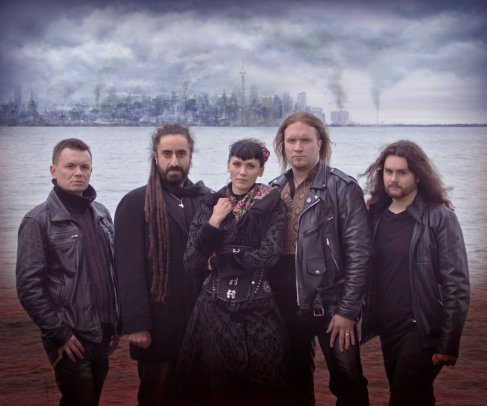 Protokult have been defining folk/pagan metal since 2009 when they released their debut album “Ancestral Anthems”, since then they have created three additional uncompromising and relentless albums with their fifth “Transcending The Ruins” coming out on October 1, 2020.

An introduction to this new offering comes with the single “Feed Your Demons”, which the band explains in their own words:

““Feed Your Demons” was probably the last song written for the record, we needed something fairly simple, heavy and to the point. I pictured a groovy yet haunting female folk bridge in the middle and wanted some extra aggression too. One of the more personal songs from the album, it deals with the fragility and vulnerability of what makes us human, I.E addictions, shame, and hopefully learning to cope with so-called vices. It’s not a song that supports addiction but essentially, controlling your demons if you absolutely HAVE to feed them on occasion.”

Over two years in the making, “Transcending The Ruins” is a rush, meant to be enjoyed either as a whole journey or at any entry point, the band ensures. Approaching this record with a bit more maturity and consistency, the result is heavier, faster, darker.

Inspired and fascinated by various metal genres alongside folk-culture, after a few years of experimenting, Protokult was meant to fuse the two together while paying homage to the past, Bacchanalian festivities and honouring the underground.

For fans of Arkona, Korpiklaani, and Nightwish, the record pulsates from start to finish yet incorporates the massive dynamics, ambience and dashes of folk-melodies that the band has become known for.

“Feed Your Demons” can be heard at the following links:
YouTube
Spotify

“Transcending The Ruins” will be out on October 1, 2020. Album pre-order on Bandcamp.

For more info:
Protokult.com
Facebook
Instagram
Twitter
EPKAbout:
As interests in history, paganism and folklore took an increasingly strong hold on folk metallers Protokult, they were inspired to unleash their debut album, “Ancestral Anthems” in 2009. With the first two pressings selling out in months, they vowed to take things to the next level while continuing to deliver a unique mix of Canadian and international influences. In 2011, they released their next offering, the EP “Marzena”, then followed by sophomore album “No Beer In Heaven” that was widely praised for its hooky fun-loving anthems, especially the single “Get Me A Beer!”.Protokult’s goal? To unite its members’ diverse cultures into one sound, balancing tradition and folklore with heavy, thrash, and black metal for headbangers everywhere.Over the past few years, the ever-evolving Protokult has graced the stage with the likes of Arkona, Turisas, Alestorm, Gloryhammer, Tengger Cavalry, Cellar Darling (X-Eluveitie) and Razor.

With beauty and the beast-like contrast between Ekaterina’s haunting vocals and the band’s metal rampage, they are ready to unveil their third full-length “Transcending The Ruins”, which is slated for release on October 1st, 2020. The album captures the reformed quintet at an all-time high, showcasing an impressive palette of powerful riffs, glorious onslaughts, and essentially reminds us, why we love heavy metal and it’s darker atmospheric shades.

“they’ve got a good sense of humor, and they sound top-notch” – Metal Sucks

“a superb album. Protokult gives folk-metal a new nice dimension. Their progressive folk-metal approach is a very delicious one. Don’t let the ‘beer-titles’ fool you, the band goals are far beyond beer-humpaa. They’re far more serious, despite of the sometimes quite merry tunes. This is one of the best folk-metal albums I’ve heard this year” – Folk-Metal.nl

“Let’s mark the list down, shall we: Awesome Folk music spanning different areas of sound and direction, check! Creative and art work based around an old fashioned beer hall, check! And last, but certainly not least, BEER themed music!!!!.” – Metal Temple