PLEASE NOTE: SERENE DARK changed their name from Endemise, under that moniker they released Far From The Light (2013) and Anathema (2016).

“An epic, heavy and creative vibe to this album which I think would appeal to fans of mid period Dimmu Borgir, Insomnium, Abigail Williams, Fleshgod Apocalypse.” – Loud Stuff

“They produce an array of songs that have an incredible sound that are  magnificently orchestrated.” – Metal Temple

“Through Anathema Endemise demonstrates the ability to filter several European influences into a unique sound from a Canadian perspective.  It is a fine edition to the black metal catalogue of any connoisseur of these dark musical arts.” – Glacially Musical

“Endemise is yet another Canadian metal band that has managed to create something fucking awesome and special.” – The Dirty Room

“Black metal vocals, death metal riffs and hella lot of blastbeats. Endemise strikes with ‘Anathema’ and does so in an unrelenting manner. This extreme metal chaos will surely crush some norms settled upon by high culture tyrants.” – Lords of Metal

“Anathema is a promising outing for these Canadian natives.” – Metal Trenches 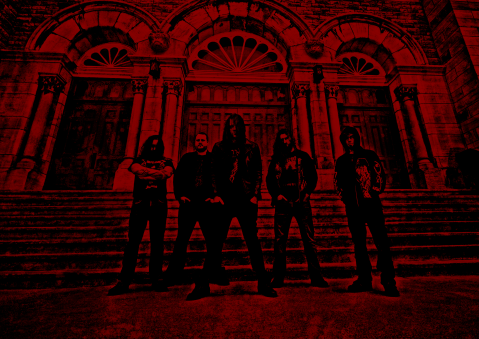 Like a blackened metallic phoenix rising from the ashes of their previous band Endemise; Serene Dark intends to take their music to new heights. The very name Serene Dark is a powerful statement of intent; in the words of guitarist Dale Sauve

“Our music can be soothing and melodic at times, and dark and heavy at other times, so Serene Dark was a perfect fit.”

Morphing from Endemise to Serene Dark was a natural progression.

“We have been making music with our current line-up for the past decade and decided a new name and fresh start was in order. Our former band Endemise formed over 15 years ago and it went through so many line-up changes and musical directions, we decided to put that band to rest and create Serene Dark as a fresh start.”

“It will be received as a new but familiar sound for any previous fans of our last band… We want our fans to get lost in the music. We want to pique some interest in fans of this style of music… We have written a lot of songs and chosen our top ten favourites.”

The album has a strong concept behind it.

“The album explores the confrontation between the shadow aspect of the personality and the integration of it into the self to create wholeness.  Influenced from philosophy, stoicism, hermetecism and the occult. The album, lyrically, is a journey towards individuation by the exploration of human darkness and transforming that pain into something tangible and meaningful. In essence- to lose one’s self entirely to reach perfection.”