Assembled in 2003 to infiltrate, build and destroy, Gatineau, QC’s INSURRECTION is an aural onslaught assaulting witnesses in both languages of French and English. Known for blending calculated technicality with a signature mixture of merciless death metal, the band has annihilated the masses with four full lengths, their most recent 2017’s “Extraction” unleashed on Galy Records to follow “Prototype” (2013), “Fracture” (2010) and “Prologue” (2009). Emerging as one of the most prominent metal bands to come out of Eastern Canada, the brutal quintet will be embarking on their first Western Canadian tour this coming June along with festival performances at Decimate MetalFest and Montebello RockFest.

“This is exciting news for us to share with everyone! We’ve been around for 15 years already and never had an opportunity like this to play out west for our fans in the prairies, so with Extraction released, it’s the perfect time! We get to finally meet and perform for so many fans that have never had the chance to see us live, and then we head on home to play Montebello Rockfest to top it off nicely.” says vocalist Stef Jomphe. 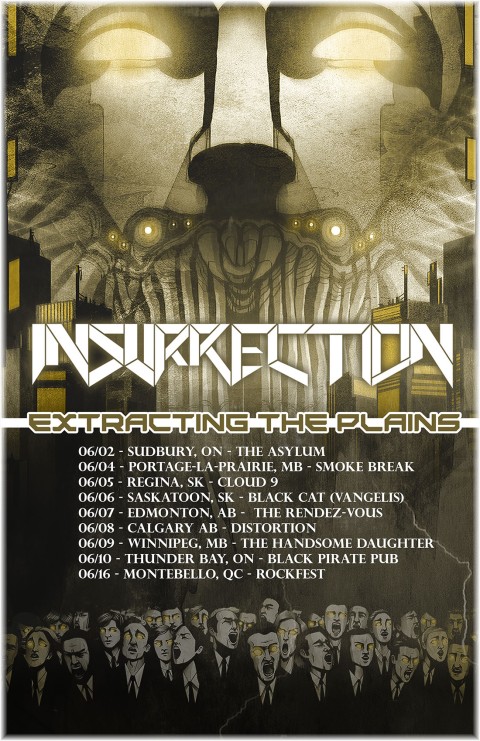 INSURRECTION‘s latest album “Extraction” is a ten track aberration that has shocked and blasted fans to the next life. The album was produced by Pierre Rémillard at Wild Studio (Cryptopsy, Obliveon, Anonymus, Voivod, Krisiun, Ghoulunatics, Despised Icon, Beneath the Massacre, Gorguts, Martyr).

Assembled in 2003 to infiltrate, build and destroy, Gatineau, QC’s INSURRECTION is an aural onslaught assaulting witnesses in both languages of French and English. Known for blending calculated technicality with a signature mixture of merciless death metal, the band has emerged to be one of the most prominent Eastern Canadian metal bands.

“We are a hybrid of the best and the worst that the metal underground has to offer, completely familiar, yet hard to pin down, better categorized as the many oddly familiar faces that death metal can take.” says band founder and vocalist Stef Jomphe.

Their 2009 debut release ‘Prologue’ gave true life to their monstrosity, the formation launched their second release 2010′s ‘Fracture’, a dark prophecy of unforgivable times and a brutal soundtrack to the fall of man. It pushed the limits with every outing, creating Insurrection to become more than the sum of its parts, but a merciless abomination.

In 2013, their third album ‘Prototype’ produced by Topon Das (Fuck The Facts) was unleashed on Quebec label Galy Records and another well acclaimed brutal assault that converted the unwitting to their legion.

Pushing development to blasphemous levels and quickly spreading their notoriety to areas of Quebec and Ontario. INSURRECTION continues to expand and modulate to corrupt the entire East coast of Canada returning with their new album “Extraction”. A ten track aberration, ready to shock and blast fans to the next life, the album is produced by Pierre Rémillard at Wild Studio (Cryptopsy, Obliveon, Anonymus, Voivod, Krisiun, Ghoulunatics, Despised Icon, Beneath the Massacre, Gorguts, Martyr, etc) and features guest vocals from Bruno Bernier (Obliveon) on “Data Extracted … End Transmission”. The album was released on October 6, 2017 via Galy Records.

“Playing an exciting blend of death & tech metal, Insurrection are masters of dishing out an aural onslaught, one that comes in both French & English. With a serious amount of meat to the bones of the guttural vocals & complex riffs, System Failure opens the album with a bang.” – Games, Brrraaains & A Headbanging Life
“Insurrection hits hard and often on their latest release, Extraction. From the opening barrage of System Failure to the closing song, Data Extracted…End Transmission, the band leaves little fuel left in the tank.” – Grim Reader Reviews

“Right from the off, Insurrection hammer you with a full on assault of thumping drums, gnarly riffs and even gnarlier, sometimes bestial, growling vocals. The opening track ‘System Failure’ is relentless from start to finish as it flies out of the traps at 100 miles an hour.” – Rock n Load Mag

“Head-banging, crushing riffs are the name of the game throughout Prototype, starting with the aptly titled “Abattoir,” which slashes and chops its way through speedy, thrash-esque rhythms and machine-gun drums. “The Chronophobes” adds some technical twists, as well as a more unpredictable structure, while highlight “Checkmate” balances intense grooves and an abundance of fierce, grimy riffs. The album features lyrics in both French and English, adding more interest to the vocals, which range from deep gutturals to high-pitched shrieks…it’s a well-executed, strong release.” – Exclaim!