“This EP is a love letter to Death Metal. Old School, Modern, Technical and Brutal;
we love all of the aspects of death metal as a genre, and we wanted to show that with this EP.
We tried to display our influences by dramatically changing the vibe of each song.” – Bloodfeast Ritual 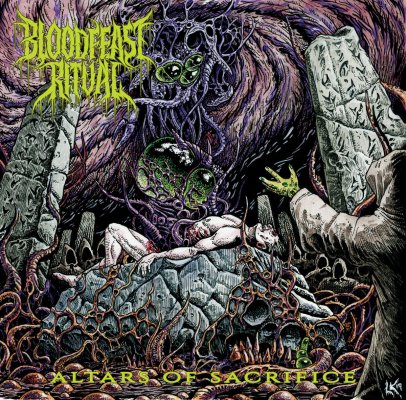 “This EP is a love letter to Death Metal. Old School, Modern, Technical and Brutal; we love all of the aspects of death metal as a genre, and we wanted to show that with this EP. We tried to display our influences by dramatically changing the vibe of each song.” says the band.

Heavy, fast, and brutal, today the band is sharing their lyric video/karaoke edition for their track “Chopped Up And Burned”, which fans can scream and growl along with on YouTube HERE.

“This song was born out of a mutual love for Evil Dead. The lyrics spell out the story of the movie, and we feel the music compliments it nicely.”

Formed in the barren lands of Los Angeles when guitarist Hunter Gurney found fellow guitarist Michael Bala shredding at a Guitar Center in Hollywood, CA. With the shock and awe of each other’s talent, a friendship was quickly formed, and soon after the two mad lads began jamming, jellying, and collaborating in all senses of the phrase.

Between the two of them, there was a strong, electrical creative energy that compelled the pair to both write songs. The young shredders were very inspired by HP Lovecraft, 80s horror, and older style death metal. Hunter added his own flavor to Michael’s existing songs, and Michael helped Hunter expand his own songwriting abilities. The pair worked very quickly, and composed a handful of crunchy tunes; soon after, it was time to find other members to join their cult for brutality.

Through a mutual friend, the duo met growler David Ainsworth. Michael and Hunter were taken aback at David’s ability to perform metal vocals in a wide variety of styles, and suddenly the wolf pack became a terrifying trio of tremendous heavy metal titans. The Mississippi Mutant aka David became close with Michael and Hunter and joined them on their quest for death metal domination.

After a few solid months in the practice room, the trio decided it was time to hit the studio. Five songs for annihilation were chosen to be recorded and were executed with surgical precision, under the watchful eye of Charlie Waymire from Ultimate Studios. Michael and Hunter shared bass duties on the recording, and vocalist David injected his vocal venom from with lyrics of demons and eldritch horrors. Showcasing a range from technical death metal to melodic shred, the trio’s sonic devastation “Altars of Sacrifice” (EP) was completed and set to assault the masses on July 24th, 2020.

2020 is proving to be a big year for Bloodfeast Ritual. The band is beginning their journey, and they appreciate each and everyone that has encouraged them, either in the form of inspiration or those that have taken the time to pass on a kind word. Especially during the current age of Covid.

“”Chunky riffs, technical playing, and vicious raspy barks make up the majority of their sound, but they also display fistfuls of melodic leads that have more of a Trad sensibility to them that helps the band stand out, particularly on the first two tracks.” – The Metal Crypt

“If you like your death metal a little bit more of the shred-tastic sides of things, and are sick of all these ‘old school’ bands, then Bloodfeast Ritual’s debut EP ‘Altars of Sacrifice’ might just be for you. Coming hard on the Arsis/Black Dahlia Murder side of things, these Los Angeles dudes are tearing it up… The mix of shredding brutality and classical guitar work here is a reason that Bloodfeast Ritual have really go something going on on ‘Altars of Sacrifice’. It is a true love letter to the genre in its myriad forms, and Bloodfeast Ritual have the chops to pull off a variety of styles to really uphold the traditions without losing their modern edge. Check it out” – The Killchain Blog

“Gruesome death metal played with loads of energy and skill that will blow you away!” – Zax Records and Reviews