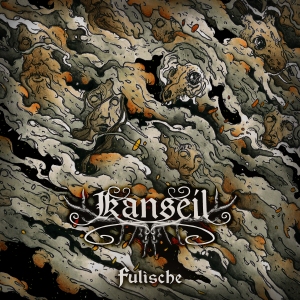 Formed in 2010, Italian Folk Metal band Kanseil are a 21st century version of their land’s rich-story telling tapestry, they are bards with instruments, musical archaeologists, excavating the sounds and stories of their country’s past to create something new, beguiling and beautiful. They are a musical time machine, bringing forth riches from the past into the present.

Between 2014 and 2016 Kanseil played more than 60 shows with the likes of Korpiklaani, At The Gates, Enslaved, Folkstone, Manegarm, Arknoa, and Omina.

This year Kanseil will release their second full-length album ‘Fulische’.

Andrea explains that “’fulische’ are the sparks of a fire moving away from the element they were born from, they shine in their own glow and you can watch them for a few instants before they disappear forever in the dark…In the same way mankind’s stories live in the collective memory until they take flight and you have a limited time to look at them and catch their beauty before they’re lost.”

Unlike so many bands, Kanseil really are able to recreate their sound on stage.

“Live concerts are our great passion. We have fun giving them and we always get a great feedback from our audience. We care and say that all of the instruments used in the tracks of this album, such as the bagpipes, the whistles, and so on, will be used in live concerts as well. Our lyrics regard local tales and legends and traditions and pretty recent events that are worthy of attention and deserve to be remembered and saved from oblivion for the listeners!”