“The hard-charging melodic death metal of this song is itself heroic in its atmosphere, its darting, folk-influenced riffs, galloping rhythms, fiery soloing, and soaring keyboard melodies summoning mythic images of striving and triumph. While its musical antecedents are indeed clearly identifiable, it’s nonetheless a pulse-pounding, heart-swelling track, and one that proves to be very catchy as well.” – No Clean Singing

“A choral start to an album lulls the listener into a false sense of security before Edmonton, Canada based act North Hammer tear the universe a new one with their own brand of melodic death metal. Paying homage to Norse legend, North Hammer will appeal instantly to fans of Amon Amarth, Ensiferum, Wintersun and more…Those who like their metal heavy, growly, performed at a thunderous pace with guitar and bass work to die for, you’ll love it.” – Powerplay Magazine UK

“Andrew James’ one-man project from Edmonton, North Hammer enters the heavy metal fray with the crushing debut “Stormcaller.” Especially for a first release, this album is intense, heavy and filled with high quality Ensiferum worship riffage. But North Hammer is not just a clone or a tribute, the sound of the band is clearly defined within the first few tracks and continues to develop and surprise throughout the album.” – CROM Metal

““Wanderer” begins with a Bathory-esque chorus in front of tender acoustics to further exploding into melodeath territories. Riffing comes and go in form of a melody that interwines the next segments of the track, which concludes with a great solo and a nice double bass storm. The composition is dynamic and moving enough, thanks to the mix of the Quorthon worship and the swinging melodic death metal influences.” – Toilet Ov Hell

“Metalheads who are down with the likes of Wintersun, Ensiferum, Amon Amarth, Aether Realm, and/or Blind Guardian should find something to like here.” – PureGrainAudio

“Before you can gather your senses the battle finishes and leaves you bloody, but grinning from ear to ear. NORTH HAMMER have released a blend of catchy folk, death and black metal which will appeal to fans of various extreme metal. The song writing and musicianship on ‘Stormcaller’ is unquestionable and this is a very promising start for NORTH HAMMER and one I hope they can build on for future releases?” – All About The Rock

“what really stands out in Stormcaller are the riffs. Andrew James pulls of some stellar work here, catchy & exciting with each song standing strongly on its own. The blend of folk melody & heavier death-metal sounds great.” – Games Brains & A Head Banging Life

“North Hammer hit all the right notes with ‘Stormcaller’, a strong and swift record full of great tracks and it leaves you invigorating and ready for anything. A record for axe swinging, mead swilling and blood spilling, ‘Stormcaller’ is one of the most fun and fist pumping records you’ll hear this year.” – The Killchain

“For a debut, this is an outstanding album that is full of ferocity. It is fast and loud. You can imagine the headbanging that would go on at one of their shows.” – Baby Dolls And Razor Blades

“Stormcaller is a great Viking metal record made all the more impressive considering it was largely written and performed by just one man. It may not push the boat out, but fans of Amon Amarth will enjoy it a lot.” – Toby Saunders’ Rad Reviews

“North Hammer’s music is well-played, well-orchestrated, and consistently fun. I look forward to hearing more in the future.” – Metal Trenches

“Though the album itself can be viewed as a concept album, each track stands out individually and brings a new twist to Viking-metal with a North (Canadian) feel to the heavier metal genre. If you like Amon Amarth, Ensiferum, and Wintersun you won’t be disappointed in this album.” – Canadian Beats

“Stormcaller sounds polished and well thought out from the get go. Launched up melodic guitar riffs upon energetic drums and excitingly aggressive rasped vocal stylings and quickly an epic sense of victory takes hold. Managing to keep this atmosphere constant is no easy feat for a band and North Hammer manages to keep a good balance throughout. Powerful pieces of Metal are partnered with atmospheric folk melodies to give peace as a calm before a storm. This just gets the energy tense and even higher to launch into another powerful moment for the album.” – Noizze UK

“An explosively powerful and meaningful album, stacked with personality and vivid colour, imaginatively driven, ‘Stormcaller’ rises above the rest. With North Hammer, Andrew James has created his own North Star.” – Jenny Tate’s Blog 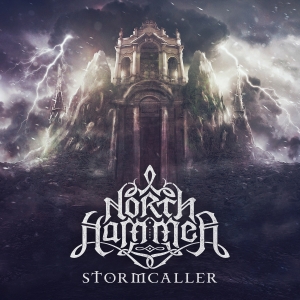 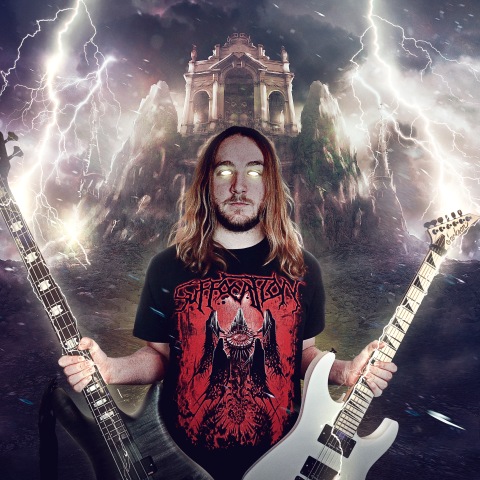 “Thou camest near the next, O warrior Thor!

Shouldering thy hammer, in thy chariot drawn,

The huge success of the ‘Thor:Ragnorok’ movie isn’t just down to dazzling effects and star-power. It is because it draws deeply from the primal wellspring of Norse mythology. In these parlous times, the tales of Thor, Odin, Loki, Freya, and Valhalla, all strike a deep chord within people’s souls.

And in the case of Andrew James (of Edmonton’s Eye of Horus’ and ‘Shotgunner’) and his new one man band North Hammer; that chord is a guitar chord!

Andrew draws inspiration from the mighty Quorthon; for Andrew is not so much a one-man band as a one-warrior metal machine. Andrew wrote and recorded the guitar, bass, vocals, and orchestration for North Hammer’s forthcoming ‘Stormcaller’ album.

Andrew explains the significance of his band’s name. “The ‘north’ part was a representation of the common theme winter that comes up in metal music, including folk metal. It is also a reference to my native Canada. ‘Hammer’ is a reference to Mjolnir, Thor’s Hammer!”

Andrew hopes it will be well-received by fans.

“The experience I’m trying to give the listeners is that of a fellow fan. I want people to be euphoric for other bands that mean something to them like Ensiferum, Wintersun and Amon Amarth. To connect personally with my music and realize that I love and worship these bands.”

While North Hammer is a studio project at the moment, Andrew plans to put together a band of top-notch like-minded musicians.

North Hammer’s “Stormcaller” is due out on March 16, 2018 and will be available on all major online retailers.