For fans of Animals As Leaders, Scale The Summit, Protest the Hero, Periphery, Intervals

“High energy instrumental metal, The Dead Centuries are all about massive hooks, futuristic riffs & technical melody. Opener Freddie Lounds is rich in skill, showcasing how a trio’s different abilities can combine to make something that sounds so grand & complete.” – Games, Brrraaains & A Head-Banging Life

“they’re not here to show you their muscles, but to share their record collection with you through a bright, pacey, grinning album that deserves every spin. Ace.” – Overdrive Mag

“Race Against Time features ten tracks of high energy material that would be an ideal piece to add to the collection of any fan of progressive metal.” – Pure GrainAudio

“Their music both hits you hard with big metal-infused riffs then provides the musical magic sponge with rich virtuoso, melodic guitar noodling, inspired by the likes of Protest The Hero, Intervals, Plini, Situ Aye, Paul Gilbert and more. It’s simply intoxicating to listen to.” – Gig Radar

“the songs on Race Against Time are exactly what we want from instrumental prog – engaging arrangements with a perfect balance of groove, riffs, and virtuosity, and enough variation to keep us listening through all ten tracks. This is a great start for The Dead Centuries.” – Heavy Music HQ

“The Dead Centuries deliver a multitude of excellent riffs across the course of this album. This band is a total hook machine, and they accomplish this over a dizzying number styles. Progressive, metalcore, melodeath harmonizing, post-metal: Race Against Time has it all.” – Metal Trenches

“If you want a more complex and technically layered instrumental album, as well as a diverse one that you can either jam to or simply throw on as background noise, this one is for you.” – Canadian Beats 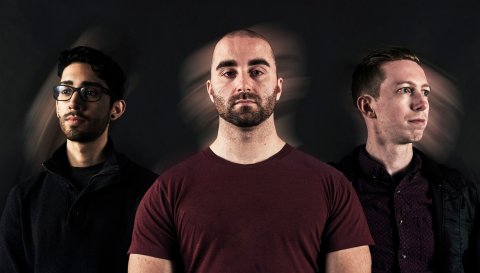 Visionary and highly influential writer Michael Moorcock, who worked with the bands Hawkwind and Blue Oyster Cult, memorably stated that ‘it is the business of the future to be dangerous.’

Ottawa three-piece The Dead Centuries are both futuristic and dangerous…which is as it should be. Influenced by Protest The Hero, Periphery, Paul Gilbert, Sithu Aye and Intervals, The Dead Centuries can easily hold their heads up in such exalted company.

In their current form, The Dead Centuries compose and perform technically precise instrumental music, rich in virtuosity, melody, compositional skills, and most importantly…they create superb music to listen to. This isn’t the sound of three musicians showing off their undoubted skills, rather they are serving their songs above all else, with every fibre of their beings, every neuron firing in their minds, every tendon in their bodies. In a sense it is as if the three musicians that make up The Dead Centuries have become one mind in their own music!

The Dead Centuries had a natural evolution into the special band they are now, originally consisting of two guitarists, a bassist, female vocalist, and drummer; as members left over time, those that remained rose to the occasion and created more technical and original music.

Adam feels the fans will love their new album “Race Against Time”, they should expect ten tracks of “melodic, high energy, refreshing material.”

Live, though, The Dead Centuries music evolves into different forms.

“We perform at a very high technical level, with the emphasis on accuracy, precision and energy. Live shows are light hearted and fun, a welcome change from most heavy bands. The Dead Centuries take their music very seriously…but not themselves!”