“Support comes from Australia’s thrash sensations Mason says Annihilator main man Jeff Waters: “With all the great bands that sent in demos, cds and links, the one that stoof out was these guys. My guitarist Aaron and I sat and listened to some of their songs and realized that this band will kick our asses if we don’t start practicing a bit more! Killer thrash band and genuine.” – Jeff Waters Annihilator

“this really is thrash in its truest essence. If you were around when thrash first broke all those years ago, you have to listen to this record. You’ll be flabbergasted how tracks like Tears of Tragedy and The Afterlife make you feel just like you did in 1984-86, so effectively has the band captured the very essence of what thrash metal should look, smell and, most importantly, sound like. – Sentinel Daily
“When the first note gets in your ear you know it’s gonna be an awesome band.  It’s blowing riffs and a nice voice reminding you of many legends.” The Metal Mag

“In town as part of their national tour in support of their latest album “Impervious”, Mason are a thrash force to be reckoned with and their performance tonight was, as recently heard and so eloquently stated, “tight as a nun’s nasty”. No truer words could be said as the Melbourne thrashers brutalised the crowd with their brand of unadulterated vintage thrash that proves that Melbourne truly is a breeding ground for some of the best thrash metal not only in Australia, but in the world.” – The Rock Pit (Live Review)

“There is a real party vibe to this set… well, the whole night but everyone has been waiting for Mason to take the stage. And when they finally do so, Jimmy and the boys prove why they are making a massive dent in the scene locally and internationally.” – Metal-Roos (Live Review)

“Such awesome thrash, it blew me away. They play this solid thrash – clearly old school Metallica & Megadeth influenced and as metal as it can be.” – Metal Roos (Live Review)

“The best thing about Mason is that their eagerness for playing thrash really shines through. They don’t forget that thrash metal fans want to hear thrash metal; not death metal or black metal. Sure, there are a couple of blastbeats, but if you just want a band that plays fast and will make you bang your head insanely hard,Mason is the perfect choice. True to the subgenres’ roots, the band is able to incorporate Maiden/Priest influences into their music, while still spending the majority of the time thrashing. ” – Skull Fracturing Metal

“Mason once again proves the charm of Aussie bands, with the huge, sweeping riffs instantly hooking the listener into their brand of groovy, thrash metal. ” – Heavy Metal Tribune

“Meaty riffs, bleeding solos, and intuitive drum patterns that express and establish Mason’s footing in high energy thrash well accompany their lyricism and vocals….Thrash metal feels so ingrained in Mason that listening through Warhead feels effortless. All kudos and compliments to them. They’ve deservedly earned the title of solid, no bullshit 80s revival. Indeed, this is the New Wave of Thrash Metal as it’s meant to be.” – Metal Obsession

“The musicianship is spot on from start to finish, the vocals are fantastic and include that classic thrash metal gang vocal chorus on a few tracks and the mixing and production of the album is crystal clear which makes a nice to some of the things I’ve listened recently…“Warhead” is a must own for all true thrash metal fans and Mason will be a band to watch over the next few years as they have an extremely bright future in front of them and will hopefully play a big role within the recent resurgence of thrash metal as a genre.” – Freakin Awesome Network 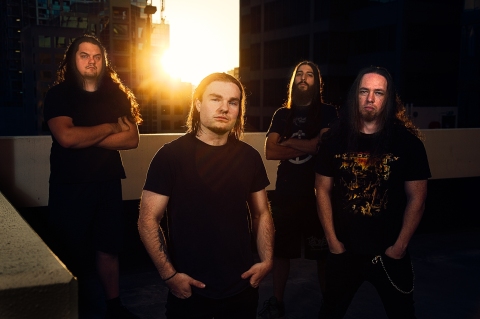 Crushing audiences across the globe with their driving force and energetic stage presence, Melbourne thrashers MASON deliver commanding performances that has taken them on tours across Australia and beyond in Asia, Europe plus Canada where they have shared the stage with the likes of Harlott, Havok, Accept, Revocation, Mutank and Annihilator.

Drawing influence from The Big Four and The Bay Area, MASON encapsulates the 80′s thrash sound mixed with fast tempos and a dominating rhythm section. Unleashing their debut self-titled EP in 2011, MASON are ones not to let the dust settle. Their ten track debut album, ‘Warhead’ was released in 2013 and included guest guitarist Jeff Loomis (Arch Enemy, Nevermore). In 2016, MASON jumped straight back into the studio to record their second EP, ‘Unmerciful’, the perfect follow up showcasing the band’s ability to fuse fast and aggressive metal along with melodic guitar work that captivated and reinforced their stronghold on a global level.

Now in 2017, their second full length “Impervious” is crashing the gates and kicking the mosh pit into overdrive.

“During the demo process we wrote a lot of material, but the majority made the “Impervious” album minus one or two songs. We spent a lot of time fine tuning the songs and making sure they kicked ass! For this album, we focused mainly on trimming the fat and stepping up the energy and tempos. Fast, focused and heavy! For those wanting to know more about this release. “Impervious” touches on so many topics from suicide, death, terrorism and more events that happen to people around the world. When ya look at the front cover, it is a symbol of character and strength of a boy that goes about his everyday life in the worst conditions and does what is normal to him to get by day to day. To sum it up, this new album is powerful and holds a strong message from start to finish.”

Track by track explained by MASON:

3. Tears Of Tragedy – This is our favourite song of the album. Such a fast song lyrically, this song has it all. Classic thrash, ripping solo’s and a killer melodic break down.

4. The Afterlife – This is where the album starts to get complex and interesting, this song has a lot of technical parts and there’s a lot of cool elements going on playing and writing wise if you really listen.

5. Impervious – The title track of the album. One word, EPIC!

6. Cross This Path – This song has really taken over as the ‘mosh pit’ anthem. There is so much energy and aggression every time we play it live. As a lyricist, I was really proud of this one.

7. Sacrificed – Grant Burns and his jazz timing. This song we definitely stepped out of our comfort zone and experimented with a lot of different elements. From a crushing riff out to a technically proficient lead section. Truly a song that we are incredibly proud of.

8. Hellbent On Chaos – One of the heaviest intros we have ever written, this has spawned from the intro Eligos, so we decided to adopt it and make another song and a beast was created. Thrash attack!

9. Created To Kill – We wrote this song based on “The Walking Dead” TV show. We love it and thought it would be cool to write a song that would fit the show and hopefully maybe it gets picked up and we never have to work again haha. Vocally this song came out the best! The perfect ending to this album.