“Crafteon are about to self-release their debut album, Cosmic Reawakening, and it’s one that should definitely be on your radar if you’re a fan of black metal or legendary horror author, H.P. Lovecraft. From the moment you hit play on the album, you’re immediately transported into a melodic and mystical world that Crafteon builds on across all 8 tracks, and leaves you wanting more.” – Metal Injection

“The lyrics are indeed Lovecraftian in their evocation of blood-chilling horror. And the music effectively captures the terrifying and grandiose drama of the words, with a pulsating, yowling riff that gets its hooks in fast and cracked, strangled vocals that are monstrously ugly and rise up in flames of delirious anguish.” – No Clean Singing

“this is one of the year’s best releases and deserves the widest possible audience.” – Hellbound

“Crafteon is infinitely better than all that West-coast, tree hugging, ambient, hippie, post-crap excuse for US Black Metal that is saturating the scene these days. Old school and way cool, check out COSMIC REAWAKENING.” – Metal Rules

“Unlike many other bands who claim to be inspired by a certain subject or person, Crafteon do a fantastic job of capturing the spirit of Lovecraft while still making incredibly exciting black metal.” – Games, Brrraaains & A Headbanging Life

“Another release where it’s frankly hard to believe it’s their debut due to the level of quality on display, I’d wager these wraiths get picked up by a label fairly shortly. If you’re a fan of Lovecraftian mythos and/or good Swedish black/black metal in general, pick this up without hesitation.” – Black Metal Daily

“If Black Metal and Lovecraft are something that floats your goat, then the debut full length, ‘Cosmic Reawakening’, from Denver’s Bardic Black Metallers, Crafteon, is worthy of your ears and time….’Cosmic Reawakening’ is, simply put, a great listen and an easy and engaging one at that, it’s mood rich and anyone who is familiar with the stories will appreciate just how pace and content suits the tales concerned, from the blackened well varied riffing to the sinister edge that comes from the bass lines which are prominent and add mood and atmosphere without dominating.” – Metal Talk

“”The rhythmic and melodic variety are absolutely Cosmic Reawakening’s strongest assets, and it achieves something most scant few black metal albums can: It’s charming…Cosmic Reawakening is a totally memorable and undeniably fun listen as is… If you decide to check it out (and you should if you’re a fan of melodic black metal), I recommend picking up the CD version.” – Angry Metal Guy

“The songwriting is solid, especially so for a debut, bringing a mature and full bodied sound that. There is not any down time throughout, as the album goes for throat and refuses to let up. Crafteon may have released their debut independently, but it shouldn’t take long for these guys to get picked up. Evoking the best of Swedish melodic black metal and mixing it with a classy melodic death metal sound, Cosmic Reawakening is equal parts pummeling and majestic.” – Metal Observer

“Black metal based on H.P. Lovecraft you say? Is there any better combination? Of course there isn’t! And that’s exactly what Crafteon peddle, a brand of melodic black metal rich in Cthulhu’s and other sticky monster stuff… High drama prevails as Crafteon expertly craft a journey that’s fantastical and feverish in its intensity and its genius lies in its subterfuge. You see, Cosmic Reawakening creeps up on you, unnerving, hideous yet strangely hypnotic and its horrors appear to lurk under the surface, masked by melody.  To quote the great man himself, “with only a slight churning to mark its rise to the surface, the thing slid into view above the dark waters. Vast, Polyphemus-like, and loathsome””. – Worship Metal

“Press play below and give yourself over to Crafteon’s bold take on Lovecraftian metal. From the seafaring harmonies of “The White Ship” to the eerie melancholy of “From Beyond,” Cosmic Reawakening has the riffs and spirit to please fans of mythic metal from Bal-Sagothto Keep of Kalessin. And at a tight 44 minutes, the record’s engrossing narrative is more than enough to lose yourself in.” – Toilet Ov Hell

“…on the band’s Cosmic Reawakening debut, Crafteon string together eight songs stocked with climatic melodies (“What the Moon Brings” in particular) and the right amount of atmosphere. To further add to the band’s (black) cauldron, Cosmic Reawakening is self-released and knocks the socks off a lot of black metal that labels are ramming down our throats. Quality stuff.” – Dead Rhetoric

“Cosmic Reawakening is a well-constructed piece of melodic black metal, easy to listen to and certainly worthy of repeated listening.” – Sentinel Daily

“strong debut by the quartet” – Metallian

“one of the most memorable black metal albums ever.” – Disagreement.net

“This CD is a DIY project. Crafteon’s work without a label is masterful. It’s a bit rare to make an album that sounds this great. Even on CD, through the tiny speakers, this album sounds amazing.” – Glacially Musical

“I had the feeling that Crafteon was something creative. I sensed in the overall sound their desire to be great. After listening to the album for days on end to confirm, I’m glad to report that they definitely have made a very cool album, in my opinion. I have not heard another black metal band that sounds like this one, certainly not this year and not that I can remember in the recent past. The idea of classic black metal is important to the band and I think that you will sense it, too. Crafteon is not about playing fast or slow for the sake of it. It’s about a general thing like atmosphere.” – Metal Bulletin Zine

“Skillfully navigating the pages of H.P. Lovecraft is no easy feat and even more so, setting these pieces to music of your own doing. Lord Mordiggian does a superb job and one will need liner notes (yea!) to follow the lyrics and make good sense of them. The music stands on its own and is masterfully done by the current troupe. There is very intricate playing and changes to suit the splayed writing of Lovecraft (in this view). Fashionable attire and a cool, unified, foreboding look also helps sell this feature presentation! ” – Dutch Metal Maniac

“I would say that if you’re going to invest your time and hard earned green bucks on a musical release, this would definitely be a solid selection. If you are at all interested in Lovecraft-inspired Metal, if you are into Black Metal in general, if you enjoy hearing music that is so good you immediately tear all your hair out and roll around on the floor foaming at the mouth as ancient entities fill your head with forbidden secrets, then this is the release for you.” – Metal Temple

“Young American black metal band Crafteon have the potential to become a band of decent renown in time, given the trajectory they’ve set for themselves with their debut “Cosmic Reawakening”.” – Drunk In A Graveyard 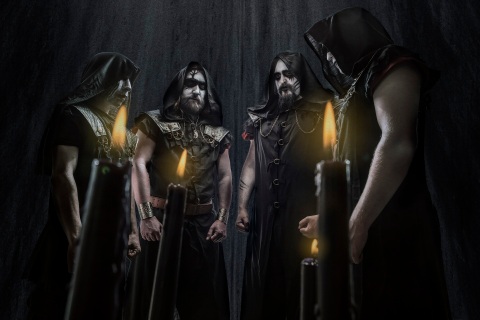 “That is not dead which can eternal lie yet with strange aeons even death may die.” – H.P Lovecraft ‘The Nameless City’

H.P. Lovecraft (1890-1937), creator of the Cthulu Mythos, was the most influential horror writer of the 20th century. Indeed, no less a talent than Stephen King said Lovecraft was ‘the 20th Century’s greatest practitioner of the classic horror tale.’ Lovecraft’s ability to evoke brooding otherworldly horror is unsurpassed and has influenced a great many heavy metal artists from Iron Maiden and Black Sabbath to Metallica. Yet no band has ever paid tribute to Lovecraft with the same degree of scope and immersion as the appropriately CRAFTEON.

CRAFTEON is the conception of vocalist and guitarist Lord Mordiggian. A teacher of literature, Lord Mordiggian was inspired to create an entire album inspired by his favourite writer H.P. Lovecraft.

Musically inspired by the likes of Shining, Dissection, Nyktalgia, Cradle of Filth and Iron Maiden, Lord Mordiggian describes the sound of CRAFTEON as ‘rough-hewn, distraught, mucilaginous, archival and multiplanar.’

CRAFTEON’s debut album “Cosmic Reawakening” features eight tracks inspired by classic Lovecraft tales such as ‘The Outsider’, ‘Dagon’, and ‘From Beyond’. CRAFTEON have achieved the unachievable in crafting music to match the stories, indeed, such are their storytelling prowess and their style of music could be dubbed Bardic Black Metal. Lord Mordiggian is optimistic about the album’s reception and there is more music to come.

“I expect the general fans of black metal to enjoy the influence of early Swedish black metal…This band will remain in the realm of Lovecraft and at least his genre, and considering he has hundreds of other stories, the music to come in the future is virtually limitless as far as the concept goes. I already have several songs in the works for the sophomore album, and this time the other band members are contributing their own original pieces as well.”

CRAFTEON’s debut album “Cosmic Reawakening” is due out August 25, 2017.