For fans of Cult of Luna, High on Fire, Neurosis, Khemmis, Unearthly Trance

“These Canadian doomsters may have a penchant for blistering fuzz-laden riffs, but there’s just as much focus on this, their second album, on atmospherics. Post-metal-influenced sonics are integral from the opening moments of the album, and remain throughout….Longhouse are to be commended for one thing, it’s the skill with which they blend the elements of their sound to provide a full-length that is as primitive as it is sinister.” – Bonded By Metal – 8/10

“Man, I don’t think I’ve been this geeked out about a Canadian post-sludge record since Pyres put out Year of Sleep back in 2013!” – Hellbound.ca – 8/10

“This album is raw, tranquil, oppressive and emotive but is always of the highest quality… if you’re in the mood for a hybrid of heaviness drawing comparisons and influences from the likes of Cult of Luna, High on Fire, Neurosis, Khemmis, Unearthly Trance, we set our Sludgelord dial to stun because this album is spectacular.” – The Sludgelord

“The album is a thunderous affair, monumental in stature yet devoid of pretence, II: Vanishing‘s music befits the reverential subject matter. ” – ToiletovHell

“It might only be 5 songs long but Longhouse do more in that time then many bands do in double that. It’s a doom masterpiece that isn’t afraid to mess around with different ideas.” – Games, Brrraaains & A Head-Banging Life

“The one song from the album released for public listening so far is “No Name, No Marker“, and if you guess that refers to graves, you would be correct. It’s a riveting mix of doom and post-metal with blackened shrieking in the vocal department. After a haunting, grief-stricken opening, the track becomes heavier and more intense by orders of magnitude, eventually becoming a big juggernaut of earthquaking chugs and groaning chords, with guitar leads that shimmer, flicker, and spiral around the powerful rhythms like ghost lights. The wrenching vocals add to the music’s intensity, and the grinding bass solo is a nice touch as well.” – No Clean Singing

“This is an album that’s an extremely accomplished and enjoyable listen.  For a great mix of sludgy doom with progressive, post-metal and atmospheric elements, Longhouse might very well be one of my new favourites.” – Wonderbox Metal

“The songs on this, 5 track, album are brutal from start to finish. Songs like ‘Blood and Stone‘ and ‘The Vigil‘ both threaten the world with absolute subjugation and eternal, bloody domination.” – 925 Rebellion

“drowned in the beauty of both the instrumentals and lyricism. If you have a chance I highly recommend both this releas  and the bands debut album from 2015 Earth From Water.” – Canadian Beats

“Longhouse plays a musical style that takes sludge and doom metal and mixes them with with a very heavy vocal approach to create a very dark sounding recording, the production sounds very professional while the lyrics cover various spiritual and occult concepts.”  – Doomed to Darkness

“This trio from the Canadian capital of Ottawa plays top notch heavy sludge metal. The cover art inspired by the world turtle mythology really caught my eye, it’s pretty gorgeous and fits the quasi atmospheric side of the band well. They include some sad traditionnal doom melodies from time to time such as on “Gehenna Gate” and some progressiveness, especially in the well composed and modern guitar melodies.” – Metantoine’s Magical Realm

“It’s hard to pin down the genre style of this song, so I’m not going to try. I’ll just say that it’s a rhythmically dynamic piece of music, with some very heavy, very catchy riffs, hook-filled guitar arpeggios, a slow, sinuous melody that proves to be very striking when it surfaces in the song’s back half, and the kind of snarling vocals that wouldn’t be out of place in a black metal band. (track: Earth from Water)” – No Clean Singing

“Longhouse has only released demos up to now, but these recordings are very convincing, and a promise of the potential this band has: raspy vocals reminding me of Thou, heavy grooves à-la-Kylesa and early Rwake, hard hitting drums, and a few atmospheric post-metal passages…Definitely a band to keep an eye on.” – Metal Made In Canada 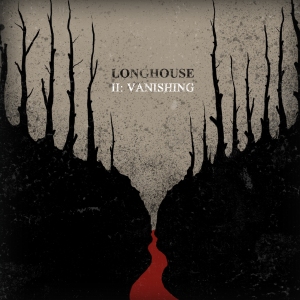 Ottawa’s LONGHOUSE came into being in 2013, when guitarist Marc Casey and bassist/vocalist Joshua Cayer turned their long-standing song-writing partnership into a full band with drummer Mike Hache to complete their circle of dark, riffy, heavy textured doom metal.

LONGHOUSE released their debut album ‘Earth from Water’ in 2015, a spiritual odyssey into the perseverance of the human spirit and the lessons we can learn from the natural world, something increasingly important as the human race sinks evermore darkly into digital isolation. Even the name LONGHOUSE gives a sense of strength, of drawing power from the earth.

In November 2016, Longhouse returned to Wolf Lake Studios, to record their sophomore album, using Mike Bond (Loviatar, Norilsk, Arms of the Girl) once again as producer and engineer. Entitled ‘II: Vanishing’, the album has a pleasing progression from LONGHOUSE’s debut while retaining the band’s core sound of heavy, intricate riffs, splashed with a touch of post-metal to guide you on a dark, and visceral journey over five tracks spanning nearly 40 minutes.

“II: Vanishing has a logical evolution that is evident in the composition, as well as production. I also think that fans should take a moment to reflect on some of themes that are threaded throughout the album.” says Cayer.

As much as Cayer is a musician, he is a strong lyricist drawing on his own origins to create song-words that are light-years away from any traditional heavy metal clichés. He draws attention to historic and current issues affecting Indigenous populations in Canada, such as the Indian Residential School System plus Murdered and Missing Indigenous women and girls (MMIW).

“The bulk of my ideas for lyrics come from exploring Indigenous ways of knowing. I am Algonquin First Nations. My family’s community is Kitigan Zibi, outside of Maniwaki, QC. However, I grew up in the city, mostly detached from my culture. As a father I have been trying to immerse myself in the stories, wisdom, and strength of our Elders, knowledge keepers and story tellers, so that I can pass that on to my daughters. Because this takes up so much space in terms of who I am, and who I am becoming, it plays a very large part in terms of influences I draw upon.”

LONGHOUSE’s ‘II: Vanishing’ will be available digitally on April 14, 2017 via their Bandcamp with physical cassette release June 2017 (date to be determined) via Sunmask Records.

This is the beginning of the journey into the darkness and the unknown – hunting by the extended period of light provided by the last full moon before the winter settles in for the long, cold season. There is a duality in the long shadows created by the moon: an obstacle, concealing treacherous terrain and obscuring dangers in our midst; and an opportunity, providing cover to use so that we may succeed in our task. This sets the tone for the subject matter of the album.

This is the title track of the album, and is part of our efforts to bring awareness to the issue of Murdered and Missing Indigenous Women in Canada. It is a call to recognize one of the many symptoms of the colonial process and failed attempts to assimilate Indigenous populations, as well as a way to honour and acknowledge all the brave women and girls who have come forward to share their very personal stories of abuse and victimization. The song was largely inspired by the Maclean’s article ‘It Could Have Been Me’ – http://site.macleans.ca/longform/almost-missing/

This song is about recognizing the shared humanity of all people, and the intricate and complex web of relationships we share with the earth and all of creation. For Indigenous peoples, honouring and caring for these relationships is of the utmost importance. We must value all of creation, from the waters, to the plants, to the animals, to the minerals in the soil and the sky and heavens above. All relations are significant and all things have a purpose – whether it is blood, or a stone, or anything in between.

This song is written from the voice of children who died while forced to attend residential schools, and were buried in unmarked graves. Between the 1880s and 1996, over 150,000 Indigenous children were forced to attend Indian Residential Schools – church and government run industrial boarding schools. Many survivors reported suffering all levels of abuse at the hands of school staff. The mortality rates, due to poor living conditions, overcrowding, illness, abuse, and neglect were so high that in the 1920s it became policy to no longer keep record of children’s deaths. The Truth and Reconciliation Commission has recorded approximately 3201 children who died from conditions related to these schools. It is feared that the true number could reach as high as 80,000. Many children remain unnamed, and many buried in unmarked graves.

This song was written as a collaborative effort with JD Gobeil from Loviatar. It is an exploration of stories of the Thunderbirds. They are immense birds found in First Nations stories, and are regarded as protectors of the earth. The beating of their powerful wings bring strong storms, and their eyes are the source of lightning bolts, which they use to protect the earth and humans from the horned serpents – huge snakes that dwell deep beneath the waters. Thunderbirds have the power to transform themselves and the things around them, often using this ability to teach lessons to those who would break natural laws.