“In a perfect work, bands like Radio Free Universe would be all over the radio. They’re so universal while being unique. You simply cannot dislike this album unless you just don’t like music. They are unique in the fact that they have developed their own niche in the rock genre, they have their own style without reinventing the wheel. This album would sound great on vinyl, CD or on your mp3 playlist (although I recommend vinyl or perhaps 8-track).” – Rock And A Hard Place

“What a great band! … These guys really pack a punch!” – Way Out Radio

“This is authentic and real rock music. Vocals that speak to listener, amazing lyrics that leave a deep and lasting impression. All surrounded by credible hooks that layer the music in bliss. Radio Free Universe live is proof that it can be done. They are a thrill to watch live, and a very dangerous act to follow, a must see for any music lover. This is band is the very thing that makes us all want to be rockstars. I urge you to find them.” –  LA Weekly

“Radio Free Universe are bluesy, heavy on the guitar riffs, and packed with forceful, driving drum beats. Sure, this is the setup for many hard rock rock albums, but Radio Free Universe are different. The thing that separates these Canadian rockers from the rest of the stale pack is the sort of retro nostalgic feel they are able to hone in on. It’s just awesome and affords their music a special classic rock sound with a modern twist.” – PureGrainAudio

“Call it a resignation to the powers of the cosmos or a rock and roll revelation but when Radio Free Universe plays, it’s best to just to be a part of the moment and let destiny have its way”. – View Magazine

“I was impressed with every musical nuance this band presented. Great guitar riffs, driving rhythms produced by the bass & drums , giving the illusion of a rolling freight train. All this is highlighted by a seasoned front man reminiscent of rock bands like Led Zeppelin, Deep Purple & Black Sabbath. Some of the tracks I heard inspire the audience to sing along while others relate specific stories.” – The Hamiltonian

“Talk about a last-minute addition to our list! We just discovered this band in mid December as they were opening up for White Cowbell Oklahoma at Lee’s Palace and they became an instant favourite of all our editors. Zeppelin infused riffs and rhythm this is one band we want to see a lot more of in 2016. Singer George Panagopoulos looks and sounds like Sammy Hagar and we can’t think of a better compliment to bestow on a rock band front man.” – Tmakworld 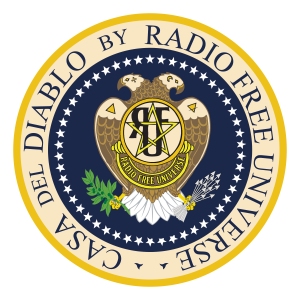 We live in a world where everything, including music, is itemized and made into a genre (indeed the sub-genres grow daily!). Yet rock is all about rebellion plus rejecting norms and Hamilton, ON’s marvelous RADIO FREE UNIVERSE are very much their own creation. In vocalist George Panagopoulos’ words, they are “genuine, honest, heavy, sonic…liberating.”

Panagopoulos explains liberty is a big part of the inspiration behind RADIO FREE UNIVERSE’s unique name. “It is inspired by Radio Free Europe, which began as part of the resistance against tyranny in World War 2. Now its journalists report the news in 23 countries where a free press is banned by the government or not fully established. We apply this to our music. Trying to break free of the chains of genres and just focusing on the song and serving it”

“We try everything and it just becomes clear what the song wants. When you do that the song makes up a world unto itself. Honestly, the universe provides! It just happens. We’re happy people who love playing together. It’s easy! Everyone pitches in, that’s what makes this special. The song writes itself. That’s a very important thing to understand what this band is. We love great rock music. We all got into this loving that.”

RADIO FREE UNIVERSE’s debut album ‘Casa Del Diablo’ set for release on March 17th, 2017 via Jet Pack Records features twelve infectious rocking tunes including their single ‘Disclosure’ hitting radio across Canada plus their soon to be anthems American Gun, 18 Wheels and more. The album was mixed and mastered by Glen Robinson (Voivod, Gwar) along with him producing tracks American Gun, Disclosure, 18 Wheels and Six with the rest of the release produced by RFU vocalist George Panagopoulos and Mark McMaster.

“I spent a good deal of time living in the US.  It’s a vibrant real culture from coast to coast. I don’t believe in the devil, but I do believe that people trap themselves in things.  The enticement of pleasure and wants that the country truly offers a great deal of opportunity, but it’s also lined with a thirst that is unquenchable. Money can be good, but in the United States it fuels every fire. The country has literally become an evolved beast that feeds of people’s desire and fear.  Everything you can think of corruption wise is alive and thriving there. As well as every great innovation and creative spirit. This album is about those things combined with my experience there. At the same time it’s a celebration of sorts.  No song judges any one at anytime. Nothing says this is bad or that is good. It’s just an observation. Example ‘American Gun’ is one of those tracks that work for people who don’t like them and people that do. All the songs are observational not so much political. The most amazing thing about that country is with all that going on you find people who are happy and full of love. That’s amazing if you think about it.”

Prior to preparing for their debut release, RADIO FREE UNIVERSE has made quite a name for themselves on the live scene in Southern Ontario and greater Toronto area since their formation in 2010. In their hometown of Hamilton, ON, they’ve performed at the Hamilton Music Awards plus have been nominated twice for Recording of The Year. Other appearances by RFU include Canadian Music Week, Lock Street Festival, NXNE, KOI Fest and Big Music Fest ft. Aerosmith, Bryan Adams and Slash.

‘Casa Del Diablo’ will be available on iTunes, Amazon, Spotify and all major online retailers.
——

Album – Track By Track by the lyrics/vocalist George Panagopoulos:

1. American Gun.
It’s a song about them. How it feels to hold one how it feels to hate them. You can sing these words and mean them.  it will work for both sides of the issue.

2. Disclosure.
This is a strange song. It’s about aliens running the planet.  Aliens from another dimension. It talks about 9/11 and reptilians that “take you away and teach you how to love, take you away until you’re one of us”

The song was instant. When the riff was written the words happened immediately and have never been questioned for any reason.  Sometimes songs are in the either and they are an accumulation of strange thoughts and strange places. I think the song is reaching to understand why the world is in the state it’s in. In the end, it’s a battle of the beast inside us and our connection to something we may never understand.

3.18 Wheels
The American road.  About a working driver who dies on the road.  A true story of a friend and perhaps what he went through.  Truck drivers are kind of the closest thing to the old sailors when they were pirates. Thus the lyric. “And now it’s 18 wheels on a dead man’s chest” the rest of the song is very literal and self explanatory.

4. Butterfly
The LA woman.  She was an actress I met and saw her transform from a caterpillar to an A list sensation.

5. DMT
I met a guy that said to me “Do you want to die… let’s do DMT”.  I never did the drug. Quite honestly I have plenty of out of body experiences, so if anything, the last thing I need to do is simulate a death experience. I find the whole idea insane. To me we spend eternity trying to find life, why rush death. It’s a great mystery. This song is about the American druggy. Trying to find his being and meaning in a place that makes absolutely no spiritual sense what so ever.  People are so disconnected from the earth and their experience that they have to do drugs like DMT to be reassured of something they are not meant to understand.

6. Six
When I was in New Orleans during my younger years, I wanted to learn to sing the blues. Some local players who saw some potential in me wanted to show me the blues for what it truly was. Not flashy, not polished, but old and broken. Limited because your voice is haggard and your guitar is out of tune. They took me to meet an alley player that the locals at the time called Satan. (just an old singer who was great and he earned that name because he was good).  To make a long story short, the guy let me hang out as longs as we got drunk. Thus the lyrics in the chorus (listen to it).

7. Magnolia Girl.
This one was inspired from an OBD (out of body experience). I went to a strange place where puppets were playing music. I literally heard this song and was handed the lyrics.  I went to the studio once I woke up and recorded it right away fresh from the other side.8. The Rest of Us
Is about a killer, a mass murder and what it does to us as people. What it turns us into.9. Dirty little things.
This is all those dirty things we do.  All the parts of our little sins we want to forget. But in my perspective each sin is a liberation from the conformity of others ideas on us.  Like the first line crosses boundaries but still there is morality. “Been on down to Memphis in the house of the rising sun, I broken the law down in New Orleans, but I still never killed anyone”.10. Rhythm And Bones,
In the end this is what we are.  As musicians were rhythm and bones. Real musicians to me will go until that’s all there is left.  The rest is metaphors. 11. Happy,
People in America are a different kind of happy. This song tells a little about that chaotic happy in the culture.12. Armageddon Road
An acoustic short song about a road to nowhere. The great American hangover.
“I’m waiting up for the end of the world cause it’s only seconds out”