“For those that like their music fast and powerful, this is the appetizer for you. It’s all kinds of mad power…an epic little album from a band that is close to conquering the universe or at the very least, close to setting it aflame.” – 925 Rebellion

Opener “Systematic” will testify to this with punchy and growling riffs and equally growling vocals. which somewhat draw you in and immediately your foots a tapping and your head is banging, as the air guitar sits proudly on your lap as you “Systematic” scream and roar to the vocals, which if you listen closer also have a story to tell.” – We Rock Webzine

“Oh yeah, this is like the music that appears in my dreams; along with a lot of other genres, however, this raucous, heavy, bone-shaking madness is top of the list and first track “Systematic” just does the trick! It wraps its harsh melodies around your head never mind your ears and weaves its own turmoil. It’s catchy and solid and to be honest a track that should carry a warning of being very addictive as your fingers reach for the replay button yet again, to bask in its extreme pleasure bound twists that lock into your head and won’t leave you alone for a second…For an EP this has four very powerful tracks attached to it and demands your attention; Do yourself a favour and listen!” – Ram Zine

“Their sound gets the feet tapping, the head banging and it is easy to sing along to the choruses.” – Sentinel Daily

“CRNKSHFT’s forthcoming release sells me on the group’s ultimate potential. I look forward to hearing what else this Canadian band can do.” – Heavy Metal Time Machine

“Stomping drop tuned leads, soaring vocals and hard-charging grooves litter the lead single, a formula that pays off in spades on the riff-tacular “Tears Me Apart”” – Get Exposed Music

“these guys have a running start to the hard rock scene, and if their message and sound stays in their current vein, there’s no denying that this band will put a crankshaft kick-start to this year’s list of burgeoning, fantastic new artists” – Shockwave Mag

“We surely have a soft spot for things carrying real punch and that is exactly what the new self-titled EP from Canadian outfit CRNKSHFT has in sound and presence. The four track offering is an imposing roar of hungry and varied metal but equally shows a blaze of hard and melodic rock n’ roll, a trait even more compelling in the successor to their previous well-received debut EP helping stir up a very healthy appetite for the band’s fierce and rousing attack.” – The RingMaster Review

“the four tracks are full of grunge influences and a killer metal delirium that will capture your heart ,and ignite your mind. “Systematic” kicks the release off in fine style ,with its bludgeoning , punishing riffs its easy to see why this was the band’s first single, the lead guitars strings are flayed as the guys will have you banging your head and bouncing around the room this is a stylistic killer opener.” – The Metal Meltdown

“Though the album is short, I found myself repeating it numerous times and jamming out each time. I highly recommend it if you’re a fan of punk, metal, hardcore or any heavy genre. There is a bit for everyone in it. I guarantee you will be screaming, drumming and playing your air guitar to it. The guys are not going to be stopping anytime soon.” – Canadian Beats

“Now these guys have got real talent – never over blown & rich, rich enough for the listener to fully immerse themselves in the absolute luxuriousness of the vocals/music! … This is truly great stuff!” – Wayout Radio

“CRNKSHFT is an incredible band with an amazing sound. This talented machine wrote and performed on the entire EP! Songs like “Breaking the Silence” not only puts this EP above the radar, it qualifies these song men to take the reins of a musical genre into their own hands. I’m giving CRNKSHFT’s new EP five out of five stars!” – Warlock Asylum

“This concise, compact and charismatic EP brings the fire immediately as it channels the essence of Hard Rock into CRNKSHFT’s opening song, “Systematic”…a marvelous release which excels in many areas including drive, determination, dominance and general brilliance. CRNKSHFT will surely prove to be a valuable name for Rock in the future if they can advance on the progress made by this EP.”  – AC Rock Reviews

“Wow wow WOW!!!!!!! This is amazing!!!! What a great track! I’m just listening, and this track just ripped my FACE OFF!!! I’m totally interested in being involved in your project in any way I can.” – Sylvia Massy (Tool, System of a Down, Johnny Cash, Prince, Smashing Pumpkins, Green Day, Red Hot Chili Peppers, Sevendust and Tom Petty) about the Single &laquo; Systematic

“You Guys are the first real band I have seen in three years, when you came on stage I was like, F*** ya, you guys are a band; When I approach a label they as me are these guys stars, I’;m going to tell them these guys are stars”  – Tommy Mac (Bass Player for Hedley/BigFatScratch/Flybanger/Everything After)

“Like an ominous storm in the distance that’s slowly moving towards you, Crnkshft’s music hits you with such strong dynamics and power that it will knock the breath right out of you” ‐Darren Grahn (Producer; Metallica, Hedley, Bon Jovi, Motley Crue)

“I have always said I wish I had one of those tracks under my belt. You know, the track that you could play for really anybody; a kid, a peer, a heavy musician, a producer, someone whom you’d like to impress for whatever reason, anybody; that is the track for me. Great writing, tons of energy, unapologetic, dynamics, intent, world class production, all parts are so strong, title and guitar hook so memorable.” ‐ Tony Ferraro (drummer for Trooper, Fear Zero,) – about the Single Systematic

“Having worked with the band for a few years, I&rsquo;m always impressed by the bands power and song writing. Definitely one of Vancouver&rsquo;s more proficient writing teams. The guys know how to get a crowd excited.” ‐ Kevin Schallie (Event Manager – Rednyne Productions  & The Live Agency)

“Crnkshft is another new band for me and it is clearly evident they are influenced by the 90’s grunge with a heavy does of metal. The power of the riffs gets right into you and holds your attention.” – Van City Music Scene 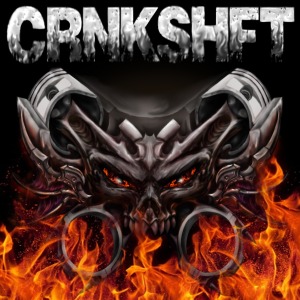 Vancouver, BC’s CRNKSHFT are setting the scene ablaze with their explosive, drop tune aggression with melody at its core. To sum it all up…these guys are ‘hard as fuck’.
Influenced by bands like Alice In Chains, Five Finger Death Punch, Pantera and Godsmack, CRNKSHFT have carved out a sound in the vein of Shinedown, Breaking Benjamin, Alter Bridge, and Black Stone Cherry.
Since the band’s formation in 2015, CRNKSHFT’s engine has been firing on all cylinders with their debut EP ‘Hard Fucking Rock’ released in 2015 plus being tapped as local support for such touring bands as Prong, Grim Reaper, Lordi and The Veer Union.
Ready to shift gear to full speed, the wrecking crew will be unleashing their next self-titled EP produced by Daren Grahn (Metallica, Hedley, Motley Crue, Bon Jovi) on March 24, 2017.
“Our new EP is a beast; we are really excited to showcase our melodic side. The four songs should touch a wide demographic of fans, which is what we want. We aren’t looking to be defined as just a heavy metal band, but as a hard knocking punch to get anyone going. We’re accepted by all those who listen to metal and rock. The whole idea of CRNKSHFT’s music is that we’ll be enjoyed by fans across a variety of genres.” states the band.
The EP’s first released single “Systematic” has already won ‘Best Metal Song’ by the Academia Awards Academy in Los Angeles, demonstrating that CRNKSHFT’s punishing high octane sound is ready to win over the masses.
When it comes to lyrics, vocalist Shane Jolie explains.
“This EP is pseudo political, but also has songs about heartache and emotions, it’s not a story from start to finish, and each song has its own message. It’s an EP to show the world who we are and what we’re all about. My writing is dark, ideas came from depression and anger, sometimes when I’m happy, but mostly not and it’s still very true to this day. I want people to take whatever they can from the listening experience of our new EP. Music always helped me out of my funks and I want CRNKSHFT to do the same. Let it be accessible to all people and all feelings.”
The band explains the EP track by track.
1. Systematic is about being a cog in the system and the struggle attached when you finally realize that’s life, but also finding the power to break free from that.
2. Tears Me Apart is about doubt and fear, putting you out there, being destroyed and just discussing those feelings.
3. Breaking is similar, but it’s about exposing false truths in the world and saying there are people just like you, don’t let depression win.
4. Old Habits is about the daily battle in your own mind between being driven or following the same pattern and expecting different results. Wait for it all to change, but old habits die hard. Unfortunately, it’s about fighting with your own mind and standing up to whatever is mentally keeping you back from achieving your true greatness.
CRNKSHFT prides itself on writing raw, emotional music and when they perform with zero fucks given, what you see is what you get…a leave it all on stage attitude that gets fans fists pumping, head banging and singing along to the band’s anthemic melodies.
“We’re not a band that’s going to give you stage props and fake blood and shit, we’re going to give you an emotional rollercoaster, it’s not just straight metal or straight rock its a mixer of everything in between, the songs have tonnes of dynamic, and we push for people to get caught up in it.”
Mark it down on your calendars, March 24, 2017; there is no stopping the CRNKSHFT freight train. The self-titled EP will be available on iTunes, Bandcamp, CD Baby, Spotify and all major online retailers.