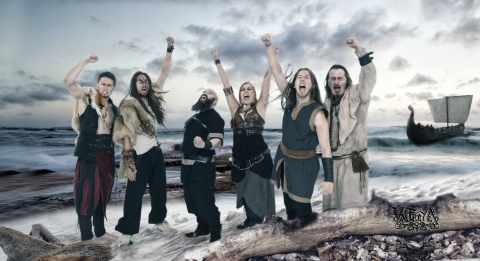 The world needs heroes now more than ever. In the shape of Montreal’s larger-than-life metal warriors Valfreya, it has them! And in their striking vocalist Crook, they have their own Valkyrie!.

In 2009, vocalist Crook wanted to play something akin to folk metal, but even more aggressive and fast paced. Combining Valhalla and the Norse goddess Freya, the band has been creating music and lyrics to revolve around stories inspired by Norse mythology.

Orchestral and death metal with a hint of folk music, the prolific Valfreya have released two well-received EPs (‘First Chronicles’ and ‘Acoustic Chronicles’), an impressive 2012 debut album entitled ‘Path To Eternity’  via Maple Metal Records and have just unleashed their second ‘Promised Land’ independently on January 13, 2017.

“The album is a journey through a lot of emotions and situations, giving life to a host of varied songs, each with a different sound and personality. The story behind the album is about Eric The Red discovering America and how he defies the Gods, but pays a hefty price for that defiance. ” says Valfreya about the release. “It’s a step-up in sound quality and has more intricate guitar parts and better-written music that with every listen you can discover parts you hadn’t noticed before. On top of that we have an original sound and songs! We want to give more to people that enjoy good riffs!”

Just as you hear on record, Valfreya promises the fans a unique live experience. What you hear on the album is what you get on stage. All vocals, whether clean or screams, are done by the band members both in studio and live. They dress in a fantasy-like Viking fashion to go with their story-telling, which gives an interesting visual aspect, while delivering the instrument-playing with precision. Valfreya has shared the stage with Arkona, Dark Tranquility, Nekrogoblikon, Necronomicon, Koorpiklaani, Moonsorrow, Tyr and Insomnium.