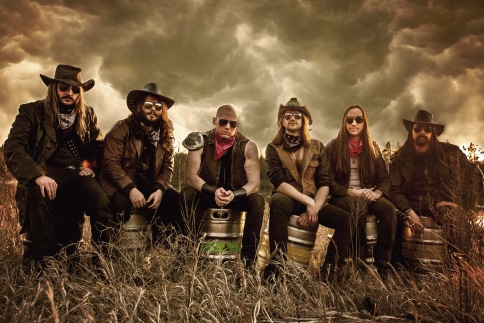 It’s not every day a band creates a whole new genre: So all hail the splendidly-named Shotgunner with their ‘post apocalyptic western party metal’.

Indeed, if you can imagine the soundtrack to an inebriated Mad Max and Snake Plissken living the vida loca in Las Vegas, you’re still only halfway to imagining the party metal mania that Shotgunner invoke.

Shotgunner aren’t letting the grass grow under their feet, as they follow up their debut ‘Locked and Loaded’ album with a Christmas EP entitled ‘Feliz Navidad’, which guitarist / vocalist Diego hopes their fans will “take as an opportunity to play for their families and further alienate themselves from their loved ones”.

Yehaw! That’s what Christmas is all about!

Diego reveals Shotgunner has a bottomless pit of party inspired metal. “We have an ever-growing list of hundreds of funny ideas, song titles, specific lines and themes. From that list we create songs that match the idea. Luke and Brandon will then flesh out the lyrics for the song. We’ll then enter the studio, consume many beers, and hit record. For the songs to have that genuine party sound, we figure we have to be partying while create them. If it makes us laugh then we know we’re on the right track! For instance, ‘Let’s Party Merry Gentlemen’ is a take on one of the most metal-sounding Christmas songs ever. With a simple, groovy rhythm section, the riffs and vocals are able to stand out. This will definitely be a live staple for the foreseeable future!”

You have to admire a band that practices what it preaches! Diego sums up the ethos of Shotgunner thusly. “We strive to be as entertaining as possible. Ridiculous song titles, funny interludes, burped gang vocals, creative uses of our instruments, anything we can do to make our music stand out from the bunch!”