“If you’re going to attempt this sort of thing, you’d better have chops. Fortunately, (OmnisighT) have ’em, and how.” – Georgia Straight

“Their stage presence and technique is out of this world…I can safely say that the only guitarists I’ve seen live that instilled the same sort of awe in me as Raj Krishna were Jeff Loomis and John Petrucci himself.” – Prog Sphere

“These guys don’t screw around with any fancy crap, they just shred shit up” – Lady Obscure

“great songwriting, fantastic lead guitar work…immediately on the first track, the intro “String Theory,” we are greeted by some immense guitar skills. Seriously, these guys are fucking fantastic.” – The Monolith

“deliciously retro, Zappa-meets-Malmsteen solos with at least one toe in the land of jazzy improv… guitar fiends should rush to check them out.” – Georgia Straight

“I have never been more impressed with a band that I had zero knowledge about. These guys play like they’ve been playing together since birth and clearly love what they do at a cellular level.” – Metal Titans 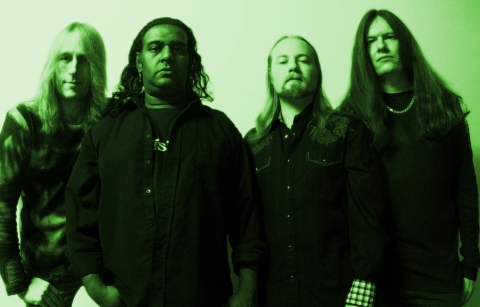 OmnisighT are influenced by greats like Soundgarden, Dream Theater, Meshuggah, Tool, and Faith No More, but transcend their influences to become very much their own creation. Justifiably highly regarded for their virtuoso musicianship and finely wrought song-craft, OmnisighT bring progressive metal into new dimensions.

OmnisighT began as collaboration between vocalist/guitarist Raj Krishna and drummer Chris Warunki, creating the impressive ‘Path’ debut album. Their live line-up was consolidated with the addition of Dave Shannon on bass and guitarist Blake Rurik. ‘Path’ was followed up by the ‘Wave Particle’ EP.

In early 2017, OmnisighT will release ‘The Power Of One’. Like all truly visionary musicians Raj was driven to create unique music. “I’ve been writing and singing songs since I was a little kid. We never seemed to hear heavy prog music that had shredding and hooks at the same time. It always seems you get one or the other….Having technical musicianship with good song-writing, shredding licks, and big hooks was the whole idea.”

Raj is full of optimism for OmnisighT’s new release. “I think our guitar player fans will really like it.  I think fans of the songs will also be pleased with the thoughtful lyrics. I’m questioning the status quo. The song ‘Power of One’ is about how one person can make a difference in the world around them just with knowledge and a little spiritual balance…The album as a whole is a musical journey, there is the concept of standing up to the oppression and deceptions of the ruling class.”

While Raj is justifiably proud of OmnisighT’s recorded output, he sees the importance of performance. ‘Live is where the band really shines! We put on a show, running around smiling and shredding. The band plays with more intensity…we often give the headliners a run for their money.’

OmnisighT’s ‘Power of One’ will be available on iTunes, Spotify, CD Baby, Bandcamp on January 20, 2017.