“‘Penny Dreadful’ starts off this 25-minute six track EP and from the off, it feel like the influences of old Hammer Horror movies are rife across all elements of the music. Dark, foreboding and with lyrics to enjoy as well as unsettle, Malacoda have done a good job in the atmospheric storytelling department.” – Powerplay Mag UK

“These sixs track are loaded with immersive tempos, excellent guitar play and plenty of keyboard sounds. The end result reminds me of something between Dimmu Borgir, Nightfall, Moonspell and Kamelot, which obviously means that this music is epic as hell. My favorite track is ‘I Got A Letter’ but there’s a lot of gothic goodness to be found on this thing.” – Merchants of Air

“Its funny how I started listening to this EP straight after reviewing the excellent Devilment Album by Dani Filth and his cohorts , these guys would fit in perfectly with the Cradle of Filth front mans  merry band of Gothic themed demons live and would be an awesome addition to any Devilment / Cradle of Filth tour!” – The Metal Gods Meltdown

“an intoxicating blend of dark, melodic metal on this six track EP Ritualis Aeterna…25 minutes of gothic metal that is morose while melodic, as well as cinematic in terms of presentation and execution.” – Dead Rhetoric

“The result is a six song listening experience that I would simply describe as “Fucking Epic!”..Throughout Di Mascio demonstrates both an incredible vocal range as well as the ability to switch style and technique often many times throughout a single song. This cat can sing! He goes from dark guttural growls to a rich, melodic, almost operatic style on a dime. A standout track for me personally was the ballad, “Linger Here”. A simply beautiful and touching song that for some reason emotionally reminded me of Queensryche‘s “Silent Lucidity”…Ritualis Aeterna is an album that requires full on active listening. I would recommend the aforementioned quality headphones, a candlelit room and possibly a nice big glass of red wine. The complexities of the compositions will be lost if you throw this on as simply background noise and that would be a discredit to the musicianship found within. I totally look forward to seeing this band live on stage. If they can bring this to life live it will be mind blowing!” – Decibel Geek

“when it comes time to create a soundtrack for the macabre, the mix of horror and rock produces some of the most entertaining and enjoyable music to ever reach my ears…The musicianship is supreme throughout…A listen to Ritualis Aeterna is a sonic journey into the horrific with the demon Malacoda as your guide.” – Glacially Musical

“This is a well executed and put together release and if you enjoy some power metal with a little extra touch of darkness to it, this EP is the one for you.” – Cadaver Garden

“The fallen angel of Symphonic and Horror Metal returns with six dark, romantic compositions that will beautifully captivate your metallic mind and heart.” – The Headbanging Moose

“Penny Dreadful kicks off with a compelling chorus and here and there light-filled doom-goth elements, lots of speed and a good dose of catchyness for such a dark track. Malacoda proves that they are far from your standard band and know how to create a unique atmosphere. ” – Wings of Death”

“beautiful EP, full of refined sounds, elegant and very atmospheric in terms of Gothic space and the symphonic and melodic arrangements that also include its Power side” – RTMB Music

“The group will satisfy fans of elegantly symphonic metal and dark colors, even if to get out of the borders of the underground would serve a wing blow, but we are satisfied and promote the Malacoda .” – Metal Eyes Iye Zine

“Malacoda aren’t just a band that excel mainly in their dark and gloomy keyboard atmospheres, as they also hit strong choruses (there are no ten minute epics here, so it’s mainly verse/chorus) in nearly every track that will actually get stuck in your head” – The Grim Tower

“Canadian gothic metallers Malacoda have further expanded their dark gothic vision by including even more literary and visual influences into their sound since their previous release.” – Don’s Metal Reviews

“dark symphonic metal with certain touches of power metal…”I Got A Letter”, maintains that mystical and dark halo, with great settings, where the bent voices acquire a greater presence, having a very catchy chorus.” – Necromance Mag

“The style of “Ritualis Aeterna” is quite unique, Malacoda have found a way to blend the styles of old school Heavy Metal mixed with some Horror tropes into the instrumentals and the use of the keys really helps to push your emotions in the direction the story is trying to make you feel. The real draw here is the vocal style of Lucas Di Mascio, the beautiful blend of haunting Power Metal vocals, almost Manson-style Industrial yells and of course the terrifying Black Metal vocals makes for a very unique experience.” – Five Magics Music

“An artistic way of expressing imaginary act. This could be a movie or a theatre act but it’s expressed as music. If you are into Type O Negative, Marylyn Manson… you may want to check them out, or if you like DARK music that touches you. – The Metal Mag

“What does this 6-track EP mean? For me, a good mix of horror, symphonic power metal, paired with dark atmosphere, originality and innovation. Really good! Add a touch of gothic romance to this mix and you’re ready for the well-seasoned midnight dinner for Helloween. ” – MetalUnderground.at 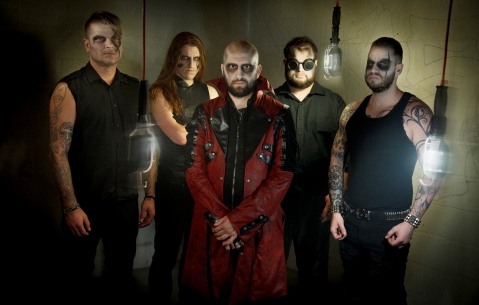 Taking their name from a demon from Dante’s ‘Divine Comedy’, Malacoda’s dark gothic vision is indeed divine but no laughing matter.

As band leader Lucas, who studied Literature and Religion at University explains: ‘Malacoda was the name of a very minor character in the book, a fallen angel who flies around with a small army of demons torturing helpless souls in Hell. From a literary perspective, I found it interesting that he wasn’t merely an evil creature being tortured for his sins, but was given free reign to do what he pleases and takes it upon himself to torture other wicked souls in the spiritual prison that is Dante’s Inferno. I wanted a powerful name that fit not only the sound of the band but also the lyrical themes I touch upon. I wanted something dark, but not something that would be blatantly devilish sounding. The name translates roughly in Italian to ‘Cruel Tail’ and most people don’t see it and think “this band is named after a demon” and see it as something more romantic sounding.’

Like the ‘Inferno’ that inspired their name they forge metal without limits in sonic shapes endless and horrifying in equal measure. Malacoda’s music vision shares much in common with Dante’s, they are unafraid to gaze into the abyss, unafraid to be inspired by the myriad of human horrors within and without. They are not blind to the worlds within them waiting to be born.

Malacoda are about to follow their well-received self-titled debut with the horror-themed ‘Ritualis Aeterna’, which enters this world on December 2, 2016. Festive it most certainly isn’t, magnificent it certainly is. Full of dark atmosphere, originality and innovation, this is gothic power metal for the 21st century, intelligence and intensity to rival that of their infernal inspirations!