“Hickory, NC’s Rapheumets Well(pronounced Ra-few-mets) is a band heavily steeped in science fiction and fantasy. And when I say heavily, I mean HEAVILY. They slam dunk their lushly orchestral and luxurious symphonic melodic blackened death metal into a fantastical and fantastically creative and complex world that I don’t even want to embarrass myself trying to explain. But, you gotta give mad ol’ props to any band willing to dive head first into something as elaborately conceptual as this costumed and inventive septet have from the off.” – Decibel Magazine

“if you like the theatrical havoc generated by Fleshgod Apocalypse and Dimmu Borgir, for example, you’ll fall in love for the music found in The Exile, the brand new concept album by the symphonic horde known as Rapheumets Well. ” – The Headbanging Moose

“As you’re about to find out, this first song from the new album combines turbocharged death metal vehemence with sweeping orchestral melodies, interweaving blazing drumwork and rapid-fire riffing with cosmic synthesizer vistas and fluid soloing, vicious growls and hair-raising shrieks with a vaulting clean-sung passage that coincides with the protagonist’s decision to end his apathy.” – No Clean Singing

“The Exilebrings symphonic elements to more intense and sometimes speedy death metal. Solid bursts of adrenaline, with the symphonies effectively working to provide a balance to these heavier moments, as heard in “The Epic of Darmak.” But the band is more than a one-trick pony, and frequently gives way to other flights of fancy while keeping the death metal sharp…an album that is well-written and enjoyable from start to finish. The potential is there for the band to really spread their wings for album number three.” – Dead Rhetoric

“The Exile is one hell of an intense and adventurous ride, and one that must be experienced if you dig on metal that is several steps to the left of centre.” – The Metal Forge

“Rapheumet’s Well waste no time in getting things going with opening track Ressurecting The Blood Gate, which sets the scene with an acoustic and stripped-back line before swiftly progressing into a heavier and fuller sound, complete with an absolutely stunning symphonic section, and when the vocals kick in, they hit you like a tonne of bricks. There’s so much body and power behind their delivery, and they subsequently leave a real impression on you.” – Soundscpae Magazine

“Interspersing lush orchestral bits into some brutally heavy yet beautifully melodic music, this band has managed to create one of my absolute favorite albums of the year so far.” – Get Ready To Rock! 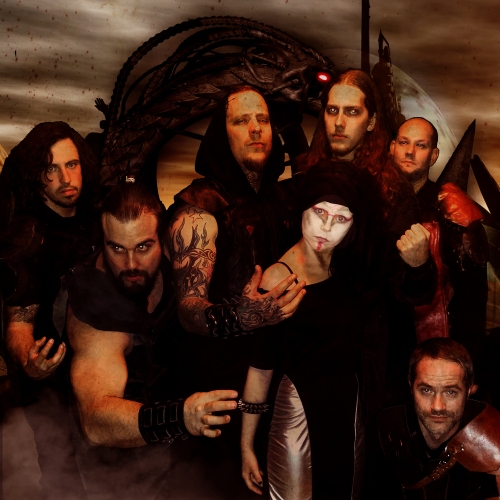 Blending a sound that is a complex mix of classical orchestrations, cosmic synths, and extreme metal to portray the epics of parallel worlds, Hickory, N.C. based Rapheumets Well (Ra-few-mets) bring forth a voyage enriched with lore, fabricated from scratch to show the depth in which represents them as artists.
Inspired by the fictitious universe of Sovael, Rapheumets Well is the name coined to the conscious deity who oversees the anastomosis of the multiverse, the master of portals and inter-dimensional travel. Being personified as a trickster, Rapheumet often creates chaos for unsuspecting voyagers. The word “Well” refers to the gravity wells, which like black holes, are catalyst of change and gateways between the cosmic plains.
“We created this name in hopes of personifying a living gateway between dimensions. We love science fiction and a few of us have extended education and degrees in science.” says drummer Joshua Ward.
Formed in 2008, 2011 and 2012 saw their first two demos followed by their first self release full length ‘Dimensions’ unleashed in 2014. Recorded by the band members, mixed and mastered by drummer Joshua Ward (Elders Realm Studio), ‘Dimensions’ featured 10 songs (from first song to last song) that progressively told a larger story portrayed in a complex saga of Atai (ancient architects) who aid in the propagation of sentient life throughout the multi-verse.
From the birth of organic matter to great wars that tear the fabric of space/time, the story of Rapheumets Well’s music serves to immerse you into a world of oddities, which is now continued in the band’s sophomore release ‘The Exile’ due out on March 18th, 2016 via Test Your Metal Records.
“The tracks are in chronological order to the story we present, we want the fans to experience it in relation to the music. We like to build a more personal relationship with fans and the music, that is why we are so focused on the story and the music in harmony.” Says Ward “Immersion, depth, our mission is more than the music but a whole sound and visual scope, which focuses around the story in which our album conveys. We are hoping to appease the appreciators of brutal music while keeping a homeostatic overtone with cosmic and ambient sounds.”
Live the band’s concert theatrics is a show truly to entertain the crowd with an opus of metal while still satisfying their story lines in their music creating an intimate but relatable ambiance for fans, especially those who enjoy bands such as Dimmu Borgir, Fleshgod Apocalypse, The Faceless, Emperor, Black Crown Initiate.
For more info, please visit http://www.rapheumetswell.org/
Concept album Summary:
In the infinite sea of the multiverse exists the plain of Sovael. From the musical works of the symphonic metal act Rapheumets Well, Sovael hides many mysteries and reveals the complex saga of the Atai (ancient architects) who aids in the propagation of sentient life throughout the cosmos. Taking place during “Soyumoth’s War” another elder architect has fled the ranks of the greater counsel. Sotath Shal along with his three nefarious servants has come to enslave the planet of Vranath Su, a desert world rich in minerals and rarities. After witnessing the atrocities of the fallen elder, Darmak alone rises against the falsifiers and so forth begins the journey of the exile.
Truth is this is a journey that viciously represents the hardships of life (in a really weird and complex way). The main character is benevolent by nature, vicious by skill and under goes tremendous torture in the name of his personal views. The main thing is, he stayed true to himself, and he is a rather bad a** character. But this whole story derives during the grand war that is across the cosmos. For the women, there is some mild romance.