For fans of Queens of the Stone Age, Danko Jones, Weezer, Fall Out Boy

“the record’s leading single (So Fine) checks all the boxes of a modern rock smash. The soaring vocals of Ian Nichols are bolstered by the thunderous drums of Dafydd Cartwright and the punchy riffing of guitarist Brock Tinsley, highlighting a huge, hooky chorus.” – Exclaim!

“The nine-track album covers everything from major-league gaming to time travel, and the band proudly advertises that it’s “devoid of the brooding seriousness and lovelorn tantrums of their peers.” Fun is the name of the game, and we can get behind that.” – Bloody Disgusting

“Their new album is upbeat and full of awesome tracks, leading straight into the first song, ‘So fine‘, which instantly gets you into the mood of this album.” – Ram Zine (UK)

“Verifying my “nerd” suspicions, they began and closed an original song with Darth Vader’s theme, the Imperial March, and I couldn’t have been happier about it. In addition to their set of mainly original music, they also included a cover of Blue Oyster Cult’s Godzilla, which was fitting with their stoner vibe, especially considering there is also a Fu Manchu version.” – Spotlight Ottawa

“this band is passionate about video games which is reflected in the underlying themes of their music. More apparent to non-video game savvy listeners is that Double Experience are a solid rock band with well crafted and catchy tunes that have crossover appeal to fans of different music genres.” – Forget The Box

“Double Experience have staked their claim as a force to be reckoned with.” – Melodic.net (EU)

“Fall Out Boy, Queens of the Stone Age and Helmet had an illegitimate lovechild.” – New Transcendence (USA)

“You’d be hard-pressed to find another band out there that works as hard as they do, while still maintaining personable and friendly dispositions and a fiercely creative spark.” – Braden Phelan, The Indie Blender

“One of the best international bands I have ever put on” – Andrew Kesby (Below the Radio Promotions, UK)

“Energy, conviction and an ear for the edgy… The highlights flow like a savage, crystal clear river.” – Screamer Magazine (USA) 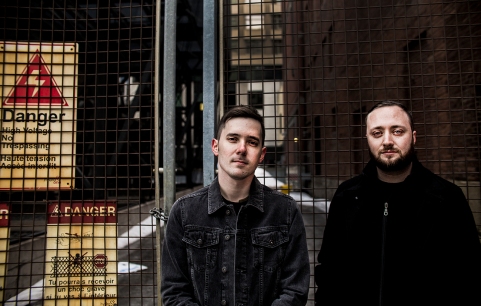 Double Experience – nerd rockers from Canada’s capital city – play on the hardest difficulty settings the music industry has to offer. Since 2014, Double Experience have logged hundreds of performances across 16 countries, including festivals (BBC Introducing) and national press (Global TV) with no additional power-ups provided by external agencies or labels. Their recent album, “Unsaved Progress” was recorded by Al Jacob and released on April 8, 2016 and reached #6 on Canada’s National Loud Chart backed by critical-acclaim from international rock and metal press.

Double Experience’s affinity for all things nerdy have found the band releasing their music on collectible trading cards, performing at video game museums, and encouraging show attendees to join the band in competitive video-games and cosplay. It’s no wonder, then, that Ian Nichols (vocals, bass) and Brock Tinsley (guitar) exercise their multiplayer tendencies both in studio and onstage. Some formal collaborations include Fred Mascherino (TAKING BACK SUNDAY, TERRIBLE THINGS) and Steve Bache (HE IS LEGEND).

Recently, their song Destiny rock anthem “The Glimmer Shot” garnered praise and in-game rewards from Bungie, the developers of the game. This match-making between video games and Double Experience music had previously been realized several years prior when the band penned theme music for “The Legend of Thunder”, a YouTube personality with over 130 million channel views as of 2017. Double Experience have now begun to share their story via music industry conventions (IndieWeek) to the next wave of bands who will take control of their own destinies.

You have been slain by the band biography… Continue?