For fans of The Dillinger Escape Plan, Meshuggah, The Red Chord, Candiria

“Windsor, Ontario’s The Apex delivers a uniquely Canadian twist on extreme technical sounds. The band lay down a very impressive strain of tech hardcore/metal (but never quite metalcore) that brings to mind The End (I think that’s the only reason this one has such a Canadian feel to me) and early Dillinger Escape Plan but in a way that is actually quite enjoyable, a word not often associated with bands of this ilk these days. Maybe it’s the pure sincerity coming through in the vocals, or the satisfying production, or just the insane technicality being done so well, but this one stands way above the tech-metal masses.” – Bravewords

“Consumer warning: ensure your ears are finely-tuned to their ‘metal’ frequency before using The Apex.” – The Windsor Independent

“These guys are unquestionably ones to watch, and if you are a fan of bludgeoning metal with added anarchy then this is a no-brainer.” – Rock n Rele Reviews

“If you delight in utter chaos and explosive misbehaviour, then! this album may in fact be the album for you.” – 925 Rebellion

“The biggest comparisons The Apex get are to Meshuggah and early Dillinger Escape Plan, not too shabby, and I don’t disagree. There’s a consistency to this album in it’s intensity from song to song, meaning there’s no space to breath, even when the tempo slows down. Vocalist Darren M. keeps you cornered from start to finish like a pitbull hulking out. Musically, The Apex are tight and on point. You can’t take anything away from them.” – Stranger With Friction 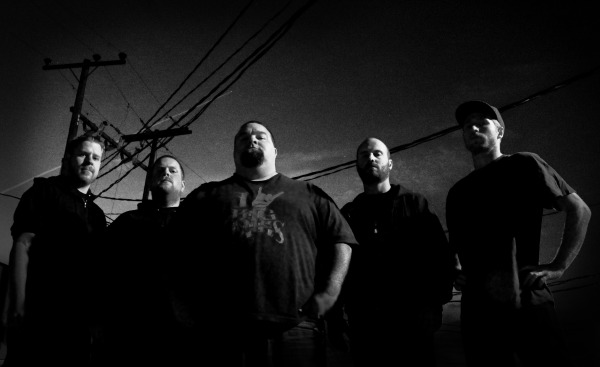 They are a collective of individuals from the Ontario metal community, whom over the years have come together from past bands such as, Closed Casket Funeral, Dismata, Blood Shot Eye, The Coalition Design, and Corprophemia to form The Apex.

In a true culmination of talent, dedication, and timing, this group has created a unique hometown sound that is now being called “Windsor Ghetto Tech”. The brutal sonic assault of their music coupled with the emotional reckless abandonment of their live performance, have drawn stanch comparisons to Meshuggah and classic Dillinger Escape Plan rounded out with a distinctly Canadian flair. To add influence, vocalist Darren M. suffers from Neurogenic Stammering, which effects his speech where the brain won’t tell the mouth what to say so he’s unable to carry on a normal conversation, but for some reason he’s able to scream all the lyrics live and that is how he gets to express himself vocally with the band.

In July, 2014 they entered Shark Tank Productions studio in Windsor, Ontario to begin recording their debut self-titled full length album, “The Apex”. They hired engineer Nick Kinnish of Serafina Productions (Johnny Truent, Architects, and more) to aid them in capturing their sound accurately. In November, 2014 they completed their recording and announced the independent release date of February 21st, 2015. In 2016, the band entered Empire Recording Studios to record their next release, the EP ‘Underbelly’ set to be unleashed in August.

TOUR EXPERIENCE
This band is no stranger to hitting the pavement to support the music they love to make. In their 15+ years of experience creating music in previous bands, they’ve been support on tour for bands like: Cephalic Carnage, All Shall Perish, Despised Icon, Cryptopsy, Today Is The Day, Killitorous, Erimha and Ion Dissonance to name a few. In previous bands they’ve also shared the stage on festivals with bands like: SOD, Venom, Obituary, Cradle Of Filth, Earth Crisis, God Forbid, Skinless, Beneath The Massacre and more to crowds up to 7500+ in North America.

As their current lineup “The Apex”, they have already invested in a mid-sized tour bus and have began to book many shows and festivals across Canada for 2016.