08/09 Victoria, BC – Upstairs Cabaret
08/10 Vancouver, BC – The Red Room
08/12 Calgary, AB – Dickens
08/13 Edmonton, AB – Mercury Room
08/16 Winnipeg, MB – The Merch
08/18 Minneapolis, MN – 7th Street Entry
08/19 Chicago, IL – Reggies
08/20 Toronto, ON – Hardluck Bar
08/22 Subury, ON – The Asylum
08/23 Ottawa, ON – House of Targ
08/24 Quebec City, QC – Bar La Source
08/25 Montreal, QC – Piranha Bar
08/27 Boston, MA – Middle East Up
08/28 Queens, NY – Blackthorn51
“new material is solid and it will be glorious to see it performed live. You better believe I’ll be banging my head in the front row when the bands roll through NYC.” – Metal Injection
“top notch melodic speed metal played with passion and precision, this is an infectious and addictive album that will have you instantly head banging.” – Metal Gods TV
“Hibria is a headbanger’s dream. Fans of power and thrash metal will find the grooves and style of this band familiar and awesome. Pummeling drum work, fantastic guitar solos and a perfect vocal style are just some of the things that sum up just how good Hibria can be.” – Broken Neck Radio
“The album blasts off with “Pain” a wonderful fusion of Hibria’s signature speed and riffs with the style of Swing music. It was during this track that I realized that this album would be a reflection of where Hibria has come from, but also where they were going from here.” – Radio Laurier
“The brand new self titled release from Hibria is a prolific Experimental Power Metal Album” – Kingston Music Reviews
“A fantastic and strong release” – Metal Temple
“With this year’s self-titled Hibria, the band makes a return to earlier power metal roots, yet with some more interesting twists again.” – Danger Dog Reviews
“with 11-tracks in all it offers more than enough metallic thrills to keep your blood pumping and your heart racing!” – Heavy Metal Time Machine
“this album features some unbelievable performances from all band members” – Skull Fracturing Metal
“those looking for lightning fast guitar duals amidst their power/speed metal will find plenty to dig into from Hibria once again.” – Dead Rhetoric
“heavy metal with a big power metal influence to it….this some great music from HIBRIA, and I think a lot of people are going to enjoy it a bunch.” Amps and Green Screens
“If you’re looking for a heavier and more modern approach to power metal, than you’ll definitely want to pick up this self-titled effort from Hibria.” – The Grim Tower
“Throw those horns up and SLAM those heads DOWN…. POWER METAL crashed into THRASH and GROOVED it out into the birth of a CRAZY COOL ROLLERCOASTER RIDE that all metal fans will love. AWESOME. ”  – Memphis Metal Mondays / RADIO MEMPHIS

HIBRIA is a Brazilian power metal band formed in Porto Alegre, Rio Grande do Sul in 1996. The band has grown in popularity in their home country plus worldwide with the successful release of five albums and a live DVD that showcases their intense concert energy (if ya never seen them in person). Continuing their venture in 2016 with their very technical playing that’s fast, aggressive and catchy, HIBRIA returns with their sixth and latest release ‘XX’ to celebrate their 20 years in metal. The 20th anniversary album is slated for release on August 9th via Test Your Metal Record for North America to follow their 2015 self-titled album.

“HIBRIA’s soul is full of music. To celebrate our 20th anniversary we present to you ‘XX’. It’s heavy metal with no boundaries especially made for the fans. Can you feel it?”

Their releases have reached the #1 position on sales charts for HMV stores across Japan, which has lead them to be support for such bands as Metallica, Black Sabbath, Ozzy Osbourne, Megadeth plus perform at Rock in Rio in Brazil and Loud Park, Japan’s most important metal festival, where they shared the main stage with some of the world’s most known bands.

* In September of 2013, the band played at ROCK IN RIO, on the same day as Metallica, Alice in Chains, Ghost, Sepultura, Rob Zombie e Sebastian Bach.

* In September of 2013, the band played in Japan for the fifth time to promote their most recent release, Silent Revenge.

* In April of 2011, HIBRIA played as the support act to OZZY OSBOURNE in the cities of Rio de Janeiro and Belo Horizonte, in Brazil.

* In May of 2011, the band toured Asia for the third time in support of their third album, Blind Ride, playing in South Korea, China and in Japan, where the band shot a Live DVD in Tokyo.

* In October of 2009, after their successful Collecting Skulls WTour, the band was invited to play in Japan again at LOUD PARK, playing to 15.000 headbangers, sharing the stage with some of the most important Metal bands of the world such as Megadeth, Slayer, Anthrax, Judas Priest, among others. Besides playing at Loud Park, the band opened MEGADETH’s concert , in Nagoya.

* In May of 2009, the band started their international tour – Collecting Skulls WTour – to promote their second album – The Skull Collectors – playing in Japan, Taiwan, Hong Kong, South Korea and Canada.

* The band’s previous album was Defying the Rules, and it brought the melodic lines from the 80?s, the speed from the 90?s and the 2000?s musicians skills. DTR was released in Japan, Taiwan, South Korea, Hong Kong, USA, Canada, Western Europe, Russia, Baltic States and Brazil.

* In Japan, DTR has been a best seller in the Heavy Metal category during 6 consecutive weeks in the retailing stores HMV in Japan, being for the whole period in the first position, and it’s been voted among the best of the year, both by the editors and the readers from the magazine BURRN. 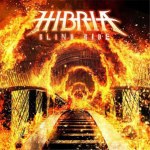