For Fans of Dillinger Escape Plan, La Dispute, Stray From The Path, The Chariot, Every Time I Die, Counterparts, Defeater

“…I will however tell you just how fucking awesome Fall City Fall’s Victory Records debut Victus is…… undeniably a contender for one of the best hardcore albums of 2013. If you’re a fan of The Chariot, This Is Hell or Every Time I Die you will definitely find some value in Victus.” – Kill Hipsters

“one hell of a ride.” – Golden Mixtape

“This band from Calgary, Alberta brings forth a storm of what modern spastic rock should be” – Head Bang or GTFO

“I rank ‘Victus’ alongside the modern masterpieces by Converge (‘All We Love We Live Behind’), Letlive. (‘Fake History’) and Vision Of Disorder (‘The Cursed remain Cursed’) for sheer passion, but also for successfully bridging hardcore, post hardcore and metalcore without pretentious mutations of the subgenres’ – um – cores. Absolutely thrilling stuff.” – Music Liberation

“as appealing as it is unnerving.” – Metal Mark

“Strategically using crushing breakdowns and driving instruments alongside visceral, nearly-tangible vocal delivery, Victus is everything any fan of aggressive music needs to truly fight their own demons.” – New-Transcendence

“a fresh, yet nostalgic take on the genre” – Scene Point Blank

“[Victus] is hands down one of the most passion driven, powerful albums I’ve listened to” – Punk World Views

“You may start randomly decapitating strangers when jamming Fall City Fall on your iPhone, but the solution for that is simple. Blame Canada.” – SWNK

“[Victus] is somewhere near being a true Post Hardcore masterpiece!!” – All About The Rock

“This is the kind of heavy music that not only can, but will change lives” – Under The Gun Review 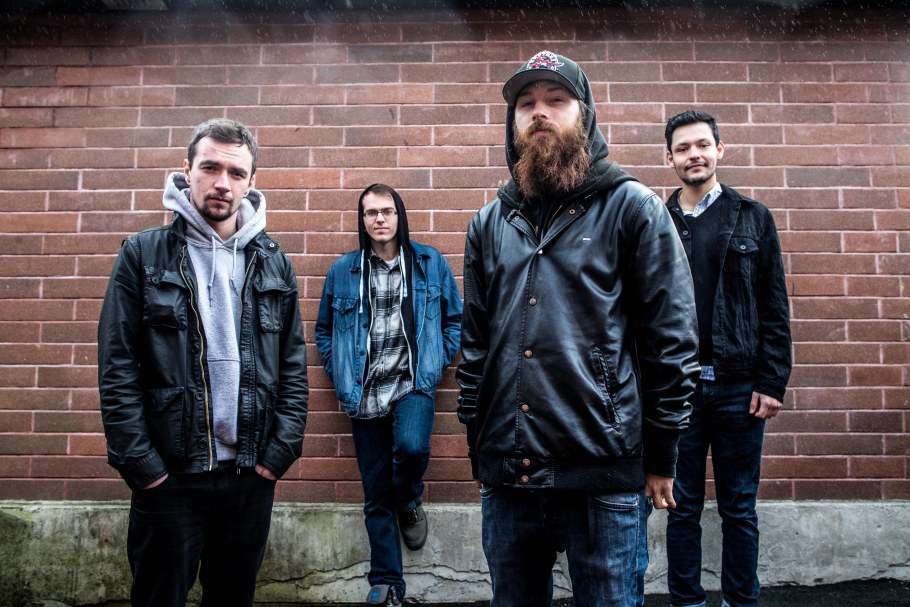 Calgary’s FALL CITY FALL provides the remedy for today’s monotonous hardcore scene and they will not be ignored. Victory Records has enlisted the five-piece ultra-dynamic band to unleash their unforgiving, commanding sound unto the world. With conviction in their hearts and balled up fists, they’ve dedicated their purpose to changing the music scene forever.   Ready or not, we must all bundle up for the metal storm that is FALL CITY FALL.

Like most bands, FALL CITY FALL began humbly in 2008 as a small project between three best friends in their hometown of Calgary, Alberta, Canada. With duel-vocalists, Nathan Zorn and Keenan Pylychaty  leading the pack, guitarist Jordon Storey, drummer Nathan Pope and bassist Andre Urquidi, have mastered their crafts, complimenting the vocals with technical riffs and hard-hitting melodies. Picking up steam, they began to collect a very loyal fan base as they continued to play local shows for friends and family. Broadcasting their hardworking attitudes, they quickly became known for their wildly energetic performances and continued to book shows all over Canada. Taking a very large step away from the typical bands of today, FALL CITY FALL stands for unison in the music scene; playing music from the heart and expanding musical horizons.

Releasing their first EP, 1629, in 2010, FALL CITY FALL had finally created the finely-tuned, perfected sound they had been searching for.  Revealing their unique blend of low growls, mid-screams, and clean vocals, they had successfully married progressive, hardcore and alternative to form a subgenre of metal that leaves crowds speechless in the best way. Hungry for more, they delivered the Dead Saints EP, solidifying their spot as one of the most prolific hardcore bands to hail from Calgary.  Drawing in hundreds on their own, they have performed alongside bands such as THE DEVIL WEARS PRADA, SILVERSTEIN, ARCHITECTS and label-mates COUNTERPARTS, showcasing their unrivaled energy to thousands across North America.

Preparing for world domination, FALL CITY FALL released their first full length release from Victory Records. Described as their most “intimate” and “intense” project yet, the alternative world greeted Victus with an overwhelming response, upon its release on January, 22nd 2013. Applauded for their honesty and the raw intensity of the vocals, Victus set FALL CITY FALL apart from their hardcore contenders, proving that with passion and conviction, anything is possible. In an industry full of musicians willing to compromise, FALL CITY FALL stands strong, dedicated to pushing boundaries and crossing lines.

Missing an opportunity to witness their musical battle ensue live will surely be a decision you’ll soon come to regret. With no end in sight, FALL CITY FALL has come to turn the hardcore scene upside down.

– Support for “Emmure, Upon A Burning Body”

– Headline/Co headline with “Wrath Of Vesuvius”

– Headline/Co Headline with “ A Sight For Sewn Eyes, Kennedy”

– Support for “ A Sight For Sewn Eyes, Empires Fade”

– Support for “ Abandon All Ships, We Came As Romans, Skip The Foreplay”

– Headline with “ Slumlord, Take The Earth Beneath Us”

– Headlining with “As Bold As Lions”